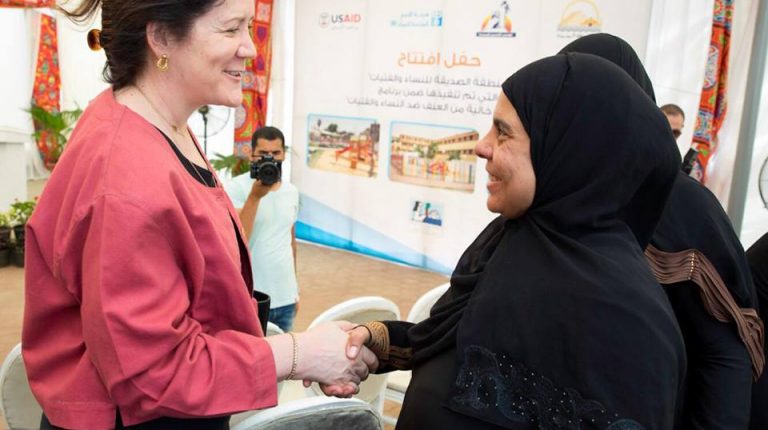 “Aviation security is not an area where we can say ‘it is okay we do not have to worry!’ It requires continuous efforts. We are happy that we were able to [provide] Egypt with some scanners,” Shea said.

Daily News Egypt interviewed Shea, the transcript for which is below, lightly edited for clarity:

Can you explain the cooperation level between Egypt and US in aviation?

We provided Egypt with very well-trained dogs which can perfectly identify smells. We also trained some Egyptian security employees in the US to handle these dogs. Some American trainers may be sent to Egypt to follow-up on the dogs’ performance. We aim to get the optimum use of this cooperation.

About 45 US companies visited Egypt in October, what are the initial outcomes of the visits in terms of investment?

Only one company has made a public announcement about their new investment in Egypt following the visit, which is PepsiCo. They announced injecting over $500m, which is going to create many jobs. Many of the companies that participated in the US business mission came to Egypt to explore investment opportunities.

I felt a lot of enthusiasm among that mission, especially during their meeting with President Abdel Fattah Al-Sisi. They heard him directly saying that he wants to give companies the chance to thrive in Egypt. Al-Sisi instructed the ministers who attended the meeting to remove any obstacles or challenges facing US companies to pave the way for new investments and a better business climate.

On 23 October, PepsiCo announced that it plans to inject $515m worth of investments in Egypt over the coming four years until 2021. It came during a conference held to mark PepsiCo’s 70th anniversary in Egypt. The conference was attended by Minister of Investment and International Cooperation, Sahar Nasr.

The American Chamber of Commerce in Egypt (AmCham), in coordination with the US-Egypt Business Council (USEBC), organised the visit of an US business mission to Egypt between 23 and 25 October, according to a statement by AmCham Egypt.

The government issued a New Investment Law, what specifically did you discuss in terms of improving the regulatory framework?

Each company has a different area of focus. I think a lot of them wanted to know the executive regulations of such laws and how they can be applied. Some of the new laws have not had any regulations yet, which are very important.

I think the parliament should listen to companies to take their concerns into consideration when creating new regulations. Some businesspersons are worried about the application of the Value Added Tax (VAT).

The mission also discussed applying US standards to agricultural and automotive spare parts’ exports to Egypt. In the US, we always ensure that US standards are accepted as similarly as we accept world standards.

When we create a regulation, we take into consideration all the standards that companies comply with, rather than creating new different standards. This process will increase US companies’ confidence.

In December, Egypt and Israel will hold a joint convention on the Qualifying Industrial Zones (QIZ). Will they discuss increasing the Israeli component?

Actually, I did not hear that they were talking about increasing the Israeli component in the QIZ agreement. I think what would be more interesting is to branch out from the traditional areas of textile, towards manufacturing and agriculture, and activating other sectors. However, the governments only encourage businesspersons, as it is a business decision, not a government one.

The QIZ concept was introduced by the United States in 1996 with the aim of reinforcing peace in the Middle East, through regional economic partnerships which benefit both Arab countries and Israel. To this end, the US issued the decree 6955, in December 1996, which authorised duty-free entry into the US for industrial products originating in Egypt and manufactured jointly with Israel, in compliance with the international rules of origin, according to the ministry of trade and industry’s website.

Initially, we were very happy to be gathering in the Maadi Public Library for the 11th GEW’s inauguration. GEW is a worldwide phenomena. We are happy that we were part of this worldwide energy entrepreneurship week.

In Egypt, we need to create about 800,000 jobs a year to accommodate all job seekers. As I understand, the required jobs already exist, and are just waiting to be filled. What we do is to help the young people find the resources that they need, and develop plans to have their own jobs. Once start-ups succeed, they will help in creating job opportunities for other people.

Entrepreneurship is a multi-approach. At the US embassy, we organise events like GEW. Every day, we provide training, workshops, and meetings with motivational speakers. For example, we host some successful entrepreneurs to share their experiences. It is very important to let them talk about their successes and failures, because other people are afraid to start their own business due to failure possibilities. Sometimes failure is not the last result. It can be a step on the way of success and make the people learn.

Is there any financial allocation from US to Egypt to support entrepreneurship?

The United States Agency for International Development (USAID) has dedicated $42.8m for entrepreneurship activities in Egypt so far. The USAID is also very engaged in the entrepreneurships’ scholarships and we are also working with the government of Egypt to create new regulatory infrastructure frameworks that can be more convenient for start-ups in particular.

The USAID’s entrepreneurship investment is the easier to count. However, we are also doing many other activities to inspire the youth through educating the needed skills that can help them to turn their ideas into real projects. The young people need somebody that believes in them and we do so.

What about future entrepreneurship programmes?

Now we have lots of exchange programmes that target specific sectors. We have sent several people to trade fairs in the US to boost their skills and enter the job market.

Our exchange programmes also target Egypt’s women entrepreneurs. Many Egyptians had the chance to visit Silicon Valley to focus on software development, high-tech, and information and communications technology fields that are needed in today’s market.

What are the main Egyptian entrepreneurship organisations supported by the US embassy?

I hesitate to mention them by name as they are so many, and I may not be able to mention all of them, However, Injaz-Egypt is doing very good work with the young people. They help youth to step their skills forwards and create their own companies. We work with a group of the young visionary social entrepreneurs for better planning. We also have partners, such as Flat6Labs and the Greek Campus.

We are really doing a lot with the American Centre Cairo on virtual reality, 3D paintings, and boosting super technical capabilities. We are providing very specific trainings. I am amazed with the trainings we offer, I have never seen that in a US embassy.

What are the pros and cons of the Egyptian entrepreneurship market? How do you assess it?

The first part of the question is an easy one, It is the human capital. You have very bright, well-educated and motivated people. You can say that Egypt exports about 10% of its population to the world. They are even successful when they work inside their country.

We are working with the government on education as a main component of the country’s infrastructure to create jobs in today’s and tomorrow’s market.

For the cons or let us say the areas where we can focus more, I hesitate to be too critical because we are all human and make mistakes, which means that institutions are also imperfect. However, we would like to have a more conducive regulatory environment, so that it can be easy for start-ups to develop further.

Start-ups have to work with different ministries. We aim to have a streamlined approach to simplify the process of launching businesses. Some countries have done better than Egypt did with regards to entrepreneurship, so we have to learn from other countries’ positive experiences in attracting businesses.