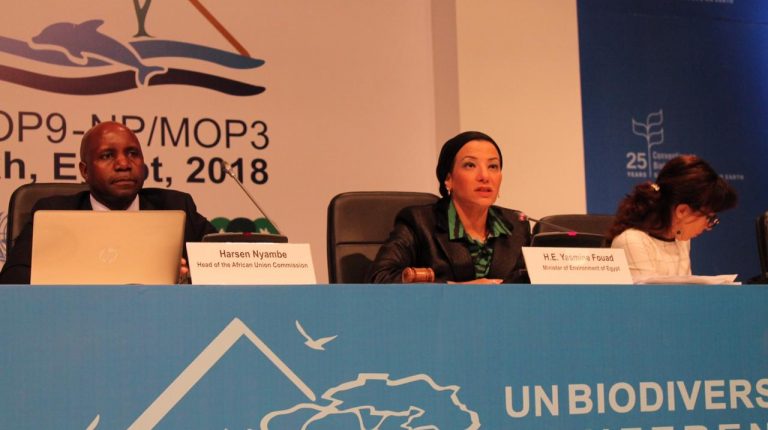 The Minister of Environment, Yasmine Fouad, said on Tuesday that Egypt started preparations for the UN Biodiversity Conference 2018 – COP14, two years ago. Fouad explained that the priorities of the conference are the African issues.

During their speech in the opening of the African Ministerial Summit on Biodiversity in Sharm El-Sheikh, Fouad said numerous meetings and conferences were held prior to the COP14 in order to define the African needs and priorities to be discussed in the conference.

“Egypt is exerting greater efforts for putting the African issues on the list of priorities of the conference during Egypt’s presidency, in order to protect the environment and soil in Africa,” said Fouad. Africa is rich with its biodiversity, which is under the threat of numerous dangers, she said, adding that preserving biodiversity is essential towards reaching development, and food security in the continent. The minister expressed hope for unifying three important courses during the conference to achieve the Aichi Biodiversity Targets. The three courses include combating climate change, protecting biodiversity, and combating desertification.

Fouad said that the ministerial summit will be a conference for operations and decisions, and taking the needed procedures for Africa.

Harsen Nyambe, head of the African Union (AU) Division of Environment, Climate Change, and Water and Land Management, said that biodiversity in Africa is very important as it helps in saving the food security and supports the economy. He pointed out to the challenges that Africa is facing which caused deteriorating biodiversity.

Those challenges include corruption, and urban expansion, said Nyambe. He warned of more poverty if we did not care about biodiversity and stopped deforestation. Nyambe added that the AU is working on numerous initiatives for stopping using plastics due to its dangerous impacts on biodiversity, as well as countering illegal trafficking on flora.

For her part, Cristiana Pasca Palmer, the UN assistant secretary-general and executive secretary on the UN Convention on Biological Diversity, said that Egypt proved that sustainable development and preserving nature are connected and depend on each other.

“We have a lot of work during the COP14, as it comes in the occasion of the 25th anniversary of the signing the Convention on Biological Diversity, which aims at securing the future of humanity,” she said. Palmer added there are a number of issues that challenge the convention, explaining that the earth could turn from carbon storer to carbon emitter, which will cause deterioration that will cost us 10% of the global production and affect health worldwide.

Palmer further added that sustainable agriculture provides food and livelihood, so that we need to find an international system for preserving the ecological system.

Egypt is hosting the Fourteenth meeting of the Conference of the Parties (COP 14) which will be held in Sharm El-Sheikh, on 17 to 29 November 2018. The conference comes also in the occasion of the 25th  anniversary of the signing of the Convention on Biological Diversity.

Communities being left behind in the fight for land in Uganda