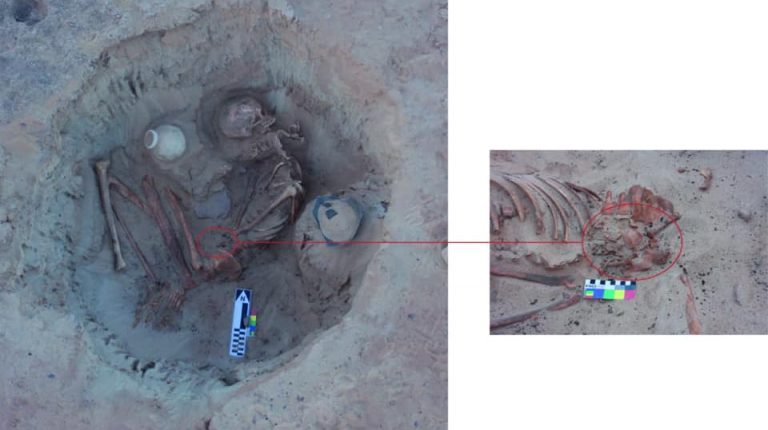 The Ministry of Antiquities announced on Wednesday the discovery of the remains of a mid-20-year-old female who was pregnant in her third trimester, while excavating in a Kom Ombo archaeological site in Aswan.

Moustafa Waziri, secretary general of High Supreme of Antiquities stated in a press release that the burial was unearthed with almost no missing parts. The remains were found in a tomb which studies reveal was used by travellers who moved to Egypt from the country’s southern boarders at the era between 1550-1750 BC.

Studies reveal that the woman was around 25, and she was pregnant in her last months, as the remains of the baby were also found placed in labour position inside of her.

The bone structures also reveal that the young lady had a problem in the pelvic area. Scientists believe she probably had a broken bone which was improperly treated, causing complications most likely leading to her death.

Waziri explained that the burials of the women were found wrapped in leather. Two pottery pots were found buried next to her, one of them is believed to have been used a lot before it was buried, while the other was painted in red and black, which is what the traditional pot residents of this area are known for making.

Several giving’s were found near her remains, which leads to the belief that the woman was a handicraft-maker and her family wanted to honour her memory by burying a lot of unused objects with her.