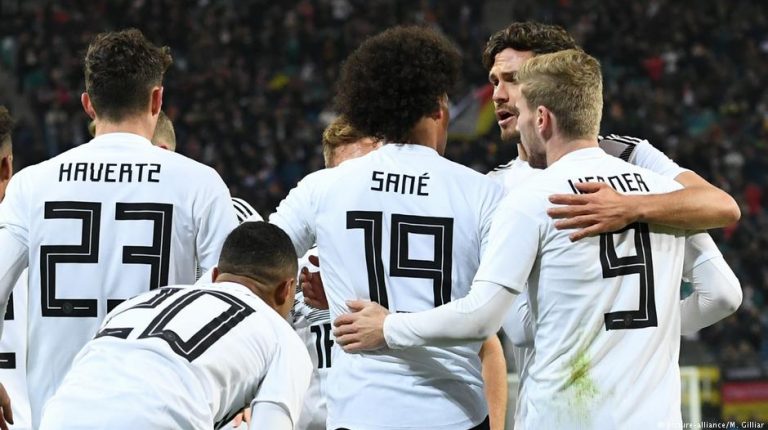 Could the crop of youngsters breaking into the national team force a changing of the guard faster than Joachim Löw is planning? The game against Russia will have some of the veterans looking over their shoulders.There was no Thomas Müller or Mats Hummel. Head coach Joachim Löw chose to rest Toni Kroos and didn't even name Jerome Boateng to his squad for this international break. And Sami Khedira has been out of the picture ever since last summer's World Cup. So the look of the German national team was quite different in Thursday's friendly against Russia from what has been in most of the previous international matches in what has been a terrible 2018 for Germany.

This also applies to the way Germany played – at least in the first half. While Germany have looked slow and spent much of their time playing the ball out on the wing in many of their previous games, they were noticeably quicker and more direct in their forward play.

Germany's third goal was a case in point. Kai Havertz played a through ball past a couple of Russian defenders, which Serge Gnaby ran on to and neatly slotted into the bottom-left corner.

Germany's attack on Thursday was made up of the 19-year-old Havertz and Gnabry, 23– along with two 22-year-olds,Leroy Sané and Timo Werner. They were supported in the midfield and on the flanks by 23-year-old Joshua Kimmich and Thilo Kehrer, 22.

The back line was a little older – in the form of Niklas Süle,23, Matthias Ginter, 24, Antonio Rüdiger, 25, and Jonas Hector – who has already reached the ripe-old age of 28. The only German player in his thirties was goalkeeper Manuel Neuer (32).

Even taking into account the fact that the opponents, Russia, were missing a number of regulars, the match in Leipzig provided a clear indication of how this team can play successful, attractive football. Also on display was the system that the national team will probably use going forward.

Havertz had a particularly good game, something that wasn't lost on the national team coach.

"He is developing well, he is very advanced for his age," Löw said after the match. "When you look at the third goal, that was quality, and he is surprisingly good for 19. I can see him being a key player over the next few years."

Changes in store for Netherlands match

Of course there won't only be good performances going forward, and there is still room for improvement in some areas. Havertz could stand to put on some muscle mass and improve his game defensively, while Julian Brandt needs to improve his self-confidence and start finishing counterattacks himself instead of whacking so many hopeless passes into the box. Even Gnabry and Sané still aren't getting things right all of the time.

Löw is bound to field a much different lineup against the Netherlands in the Nations League on Monday. Toni Kroos will be back, as will Marco Reus, assuming that he has recovered his fitness by then. He could also drop any one or all of Havertz, Gnabry and Kehrer, and maybe even Werner.

Julian Draxler, who was absent against Russia due to a death in the family, could find himself starting on the bench, possibly seated beside Müller.

Uncertain future for the 'old-timers'

Löw has repeatedly stressed that rebuilding the national team will require time, but this crop of young players could force his hand, making changes happen more quickly that he currently envisages. And the remaining members of the 2014 World Cup-winning team could see their international careers end earlier than they expect.

This is because their history of service is no guarantee of starting-11 places for players like Müller, Hummels, Boateng and Co., particularly when they are no longer performing at the required standard. At the same time, though, the national team coach probably won't want to get rid of all of his experienced players.

"In the second half we no longer had the pace, the structure, and the depth and width in our game," Löw said. "But that's what you get when you field young players."

These words will have be music to the ears of some of the veterans, as they are an indication that Low will probably want to keep some of the "old-timers" around – at least for now.