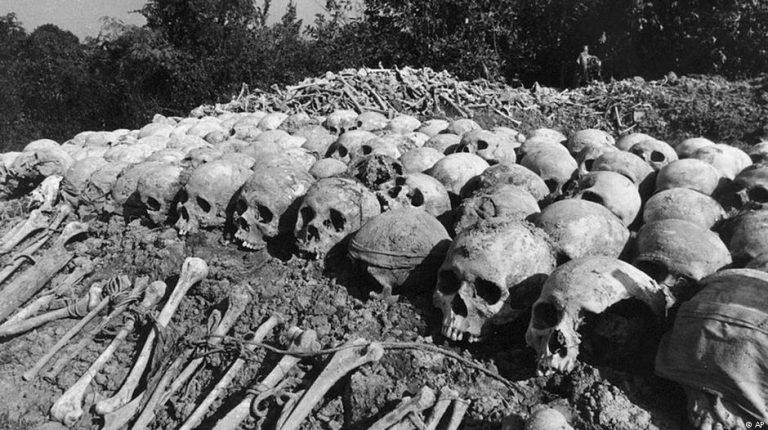 The conviction of former Khmer Rouge leaders for genocide is a symbolic human rights victory. However, the legal process has been criticized as being marred by corruption and delays. Ate Hoekstra reports from Phnom Penh.On Friday in Cambodia's capital Phnom Penh, two former Khmer Rouge leaders were found guilty of genocide by an international tribunal, which said the men were responsible for targeting Cambodian minority groups during the regime's reign of terror between 1975 and 1979. The ruling marks the first and only genocide conviction against the Khmer Rouge.

However, despite the gravity of their crimes, and the decades that have passed, bringing these former top Khmer Rouge cadres to justice was not an easy task. The UN-backed Khmer Rouge Tribunal has also taken criticism from human rights observers and independent legal experts.

The defense teams often complained about political interference from Cambodia's government and said they were not allowed to question certain witnesses. A report by Stanford University, the Asian International Justice Initiative, and the East-West Centre mentioned a large number of errors in the trial and called it a "confusing process."

Amnesty International issued a statement on Friday after the verdict was announced calling it "bitter, delayed justice." Nicholas Bequelin, Amnesty's regional director said that the tribunal should have achieved much more in the 13 years since it was established.

The convicted Khmer Rouge leaders, 87-year-old Khieu Samphan and 97-year-old Nuon Chea, are the only living members of Khmer Rouge leader Pol Pot's inner circle. The regime was an ultra-communist autocracy that sought to transform Cambodia into an agrarian-based utopia. Their plan failed entirely and resulted in the death of at least 1.7 million people, who died of starvation and sickness or were murdered.

Speaking outside the tribunal on Friday, Theary Seng, a Cambodian lawyer and a survivor of the regime, called it a "political theatre, with many actors and no surprises."

The tribunal has also been criticized for the long time it needed to reach a verdict and for the fact that only three former Khmer Rouge members have been held accountable for the regime's widespread crimes.

Along with Chea and Samphan, Kaing Guek Eav, the former head of the regime's notorious S-21 prison, is the only other Khmer Rouge member who has been brought to justice. Eav was convicted by the tribunal for crimes against humanity in 2010.

"Justice delayed is justice denied," Seng told DW. "Now only three people have been tried, while thousands of people were killers. It's not reasonable to expect that all these thousands are put on trial, but only three is also not sufficient either."

Chea was the former chief ideologist of the Khmer Rouge, while Samphan served as head of state. The two had already been convicted by the tribunal in 2014 for crimes against humanity for their role in the forced evacuation of Phnom Penh in 1975.

Friday's verdict specified that the murder of ethnic Vietnamese and Cham Muslims constituted genocide as defined by international law. The tribunal's presiding judge Nil Nonn said that "deliberate killings occurred on a massive scale" and "were systematically organized and directed."

In its offenses against the Cham Muslims, the Khmer Rouge desecrated or destroyed mosques, burned copies of the Koran and other sacred Cham texts, and executed Cham leaders. They also forced the people to dress in Khmer Rouge-black, to cut their hair short, and to eat pork and raise pigs. Execution was the standard punishment for breaching the rules.

Lars Olsen, a legal communications officer with the tribunal, told DW in 2015 that the definition of genocide in law "is different from what many people would regard as genocide."

The 1948 Genocide Convention defines genocide as having the intention to eliminate, in part or in full, a group of people based on their race, religion, ethnicity or nationality.

"Clearly in this context of Cambodia where the majority of those killed during the Khmer Rouge regime were killed by Cambodians with the same ethnicity, the traditional legal definition of genocide would not include these kinds of acts," Olsen said.

Lay Dong, a survivor of the Khmer Rouge, told DW that the verdict has provided some relief, but that it's not perfect. "If we can get more, it would be better. But right now Cambodians are not in the situation to claim more justice," said Dong.

The tribunal, officially called the Extraordinary Chambers in the Courts of Cambodia (ECCC), is a unique, but often sluggish, cooperation between the UN and Cambodia.

It has been trying to put more suspects on trial, but the legal process has been heavily resisted by the Cambodian government.

The country's long-ruling prime minister Hun Sen, who himself also served under the Khmer Rouge, has warned that more cases against former Khmer Rouge leaders could lead to a new civil war. The Cambodian police has also refused to arrest suspects under for the cases being investigated by the ECCC.

Nuon Chea's attorney Victor Koppe said that his client will appeal the verdict and "wants to fight until the end."