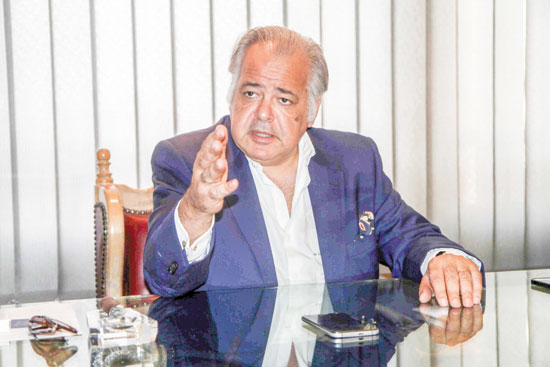 Amid the current controversy, Maged George, head of the Export Council for Pharmaceutical Industries ‘ECPI,’ highlighted that the Egyptian medicine exports sector is going through a serious situation.

He informed Daily News Egypt that this sector is the only one that is not provided with any financial support, especially from the Egyptian Exports Support Programme, and unveiled that many foreign companies have started to decrease their activities due to the Egyptian pound floatation and its aftermath. DNE interviewed George to find out more about the sector’s challenges, the transcript for which is below, lightly edited for clarity:

How could you evaluate the situation of drugs exports?

Well, I can say it is very bad. There are many reasons which led to a complicated situation which the sector is going through but the government does not take any step towards finding solutions.

What about these reasons?

All in all, countries which were considered as top ranked for our medication exports, occupy 45% of Egypt’s drugs exports volume, including Iraq, Libya, and Yemen who are currently suffering from instability in all aspects of life. These countries are facing political, economic, and social turmoil, therefore we lost these market. Indeed, the Arab Spring revolutions and the aftermath deeply affected the pharmaceutical sector.

Is there an estimate of our medicine exports volume to these countries before 2011?

It was between 70 and 90% of the total exports, so it is considered as a great loss that is affecting the Egyptian economy and market.

And what other obstacles is this sector currently facing?

Unfortunately, since the Central Bank of Egypt has taken the decision to float the Egyptian pound the situation became worse. There is an implemented rule, several years ago, which allows Gulf countries to sell medications that are imported from Egypt according to the price set in the country of origin, which means that these medications are available in the Gulf countries at the same price of those in the local Egyptian market. This condition harmed our exports, especially the floatation of the Egyptian pound in November 2016, as prices influenced by the rising of the dollar hit the roof. Otherwise, the costs of raw materials have tripled since then. In the meantime, the government does not support the pharmaceutical sector at all.

What do you mean by government support?

It is financial support. As opposed to other export sectors, the government does not offer any financial support, or even any intensives for the medication exports sector. For instance, the sector is not enrolled in the list of industries that receive funds from the Egyptian Exports Support Programme “EESP”, even though medication exports are estimated at EGP 112m in 2018 out of about EGP 800m out of the total volume of pharmaceutical sector exports.

What is the share of medicine exports in the Egyptian exports volume?

Do not you think it represents a poor percentage that discourages the government from supporting it?

That is correct, but the situation is influenced by the instability that Egypt faced during the 25th January revolution 2011. Official data reveals that our medication exports had reached $678m in 2005, which represents about six times the current volume.

How many factories already are producing medications in the local market? And are there any new investments attracted to this field, or any investments that have had to exit the Egyptian market?

We have about 120 factories, 20 of them are following both the public business sector and private sector. In addition to up to 30 factories are waiting to obtain licenses to work. Meanwhile, there are about 12 foreign plants. All foreign investments are still working, and did not leave the market, but they eventually had to, due to the aftermath of the floatation of the Egyptian pound, as it decrease some of their activities. For instance, all foreign companies cancelled their industrial improvement programmes a few years ago, as they found that they would not make any profits. On the other hand, all proposals that have been introduced by these companies to cope with this complicated situation and to overcome all troubles that these companies are facing were refused by the ministry of health.

Then, why is the Egyptian market facing a lack of medications and obstacles in exporting while we have this large number of factories?

Because of the rise in production costs, as well as the unfair prices, especially for the exported medications. This situation is forcing production companies to depend on the production of its factories that are located in other countries such as Turkey and Jordan, at the expense of its counterparts in Egypt, for exporting. Indeed, these countries are selling medications according their actual costs, and they make five times their profits from their enterprises in Egypt. Even the step that the ministry of health has taken in 2017 to increase the prices by 50% did not help companies to compensate their losses due to increasing costs that the producers faced because of dollar price hike.

What are the procedures you can propose to deal with the current situation based on what you previously clarified?

First of all, the ministry of health must be not be involved in medication pricing. Pricing policy should be set by an independent authority, and it must consider the real costs, in addition the current price of dollar before the Egyptian pound. Moreover, we need to head to alternative markets as a step to overcome our top markets in the Middle East.

The ministry of health has already announced the African market as the new destination of our medication exports, what do you think?

Actually, as head of the Council of Pharmaceutical Industries ‘CPI’ and its members, we attended several meetings with the Minister of Health, Hala Zayed, to discuss this issue to find solutions. Yet, these meetings meant nothing without taking real actions on the ground. I can say that the government does not intend to enter the African market and lacks a clear vision related to this point.

Does it mean that you are not going to work on this issue especially since your council is the representative of medications exports sector?

We already took serious steps towards establishing a new firm in alliance with 26 firms in the sector belonging to the private sector to work on the African market. This step is not just for exporting our productions, but also for constructing factories there. This market is promising and has many incentives that can be tapped such as cheap labour, and it needs cures that treatments for the endemic diseases there. Moreover, the production costs in this market are the cheapest.