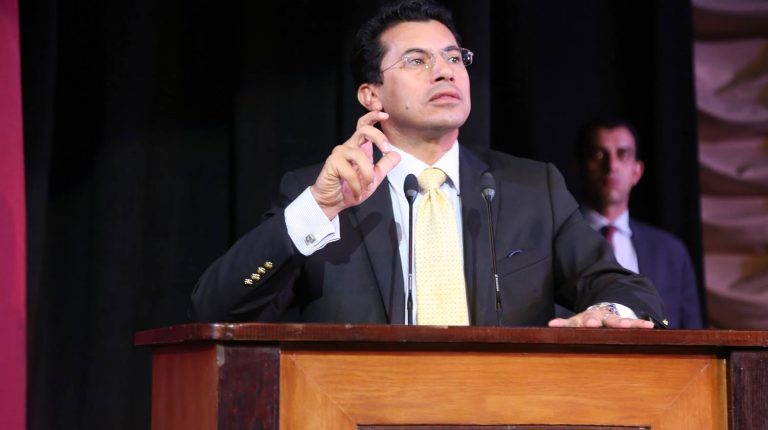 About 150 days have passed since Ashraf Sobhy became the minister of youth and sports succeeding Khaled Abdelaziz. He was chosen in the new government led by Prime Minister Moustafa Madbouly with the beginning of the second term of President Abdel Fattah Al-Sisi.

Daily News Egypt investigates the performance of Sobhy during this period.

Public work has always been the object of evaluation by the media to give constructive criticism and bring attention to the positive sides.

Since his first day in his position, Sobhy managed to make the most difficult decision for Egyptian football, which is the return of fans to stadiums after a long time of absence, bringing life back to football playgrounds. This is deemed the boldest decision made by the minister by far.

The recommendations of the World Youth Forum, recently held in Sharm El Sheikh in the presence of President Al Sisi, are considered the real challenge, presenting an executive vision to the ministry through continuous cooperation with other ministries and institutions.

Youth centres are seeing heavy demand on elections across the country following the invitation to hold elections in youth centres nationwide according to the Organisation of Youth Bodies Act no 218 for 2017, as well as the regulations of the basic system of youth centres in more than 4,000 youth centres across Egypt. The elections will end in December and are considered a main factor in eliminating corruption and relying on a new generation of young people.

Sobhy also directed his assistants to pay continuous surprise visits to several youth centres and directorates to follow-up the work progress and help overcome any obstacles that may affect the services presented to citizens in these centres.

He communicated with Salah to end the problem, giving attention to the importance of the player’s role in Egypt.

This is one of the most important positive aspects in Sobhy’s work since he took office. Other positive aspects also include activating the role of the private sector in sports investment to sponsor sportsmen and help them attain achievements in international and continental competitions.

A set of negatives that the minister fell into include the minister’s reliance on individuals who are trustworthy regardless of their skills. This has caused a major imbalance in the ministry. There is anticipation to see the minister addressing this issue and making changes in the near future.

Additionally, the minister is facing major issues within the media department of the sports sector because workers’ specialties are not clearly determined, which caused an issue that was controlled before it reached the media.

Moreover, the role of the youth sector’s media is ineffective in terms of coordinating events organised by the various administrations and departments, especially the central administration of cultural programmes, headed by Amal Gamal who authorises an employee in the administration to invite journalists to the event as a compliment, which was the case in the recent launch of the ‘Salam’ (Peace) ship. The media of the youth sector was the last to learn about the event.

Sobhy has failed so far in amending the new law despite his statements about a major gap in the law. He could not face the Olympic committee which rejects any amendments to the law without its accordance with the international Olympic Charter which prevents government intervention, which caused a clash between both parties.

The minister failed at forming committees for the sports sector in the field of marketing and investment. These committees do not any play roles except for receiving large sums of money on a monthly basis. The minister does not see their importance despite President Al Sisi’s directives to empower young people.

Our role as media is to monitor the negative sides, because media is an integral part of the system and its job is to reveal such issues clearly to public opinion.