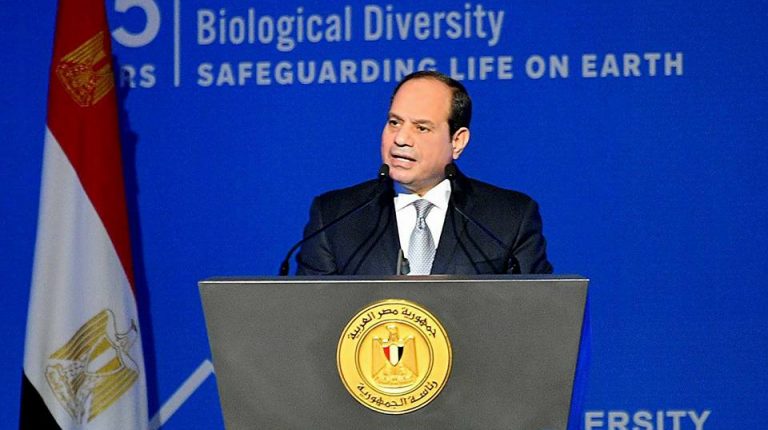 During his speech at the opening session for the UN Biodiversity Conference 2018 – COP14 which is being held in Sharm El-Sheikh, Al-Sisi declared that the Egyptian constitution includes basics that protect the country’s natural resources and ensure their optimum use, as well as protect the country’s seas, coasts, lakes, safeguarded areas, the river, and the protection of endangered species.

The president stressed that Egypt is putting the conservation of biodiversity on its list of priorities in order to achieve sustainable development and save the rights and privileges of the coming generation.

He also pointed out that the old civilisations flourished through depending on natural resources. Additionally, the president remarked that ancient Egyptians respected nature and the land as we can see in their holy texts.

Al-Sisi further said that despite international efforts since the signing of the UN convention for conserving biodiversity in 1992, yet these efforts did not succeed in achieving the aim of combating the deterioration in ecosystems and mobilising the international community towards achieving sustainable administration of natural resources.

The president explained that we were not able to merge biodiversity topics as well as we should have in all human activities. That led to signing the Nagoya protocol in 2010, which determined the international strategy for dealing with the environment.

He added that the COP14 comes at a time when biodiversity is facing critical situation and accelerated degradation, in addition to the negative impacts of climate change. Al-Sisi said that scientific research says that the human annual consumption of natural resources has increased by 30% than previous times.

“Egypt launched its initiative for integrating biodiversity in the developmental sectors, and exerting more efforts to reach an approach to integrate the three environmental agreements about climate change, desertification, and biodiversity,” he added. He further stressed that Egypt works with all international parties to making this conference a successful one.

For her part, the Minister of Environment, Yasmine Fouad, the new president of the conference of parties, said that President Al-Sisi is the first Egyptian president to introduce such an international environmental event in Egypt.

She added that biodiversity is the foundation of life on Earth, expressing that Egypt is exerting greater efforts to protect the environment, such as the project to save the northern lakes and preserving the river Nile.

Cristiana Pasca Palmer, the UN assistant secretary-general and executive secretary on the UN Convention on Biological Diversity, thanked Egypt for its efforts in supporting biodiversity. She stressed that “holding this conference reminds us of the responsibility to protect biodiversity.”

“We are here to fight for nature, and to fight for us as well, because we are part of nature,” Palmer said, adding that China will host the upcoming summit in 2020. She added that the current efforts are not enough to stop the loss of biodiversity, warning that our planet could be turned to a carbon emitter.