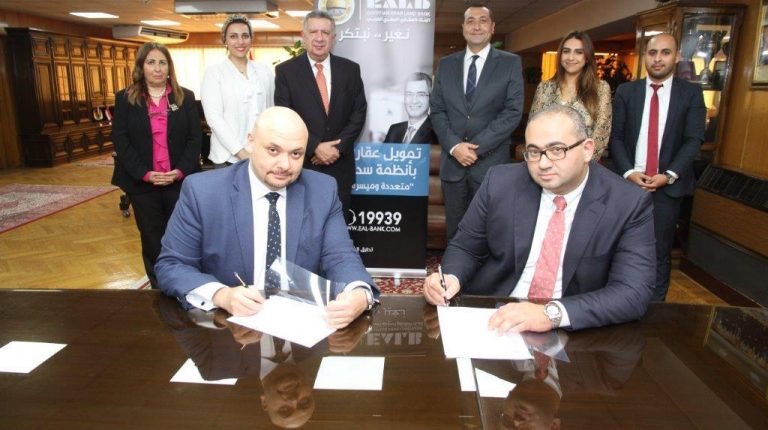 The Egyptian Arab Land Bank (EALB) and Tamweely Microfinance signed a cooperation protocol under which the company will be awarded EGP 50m in the first phase to be re-lent for micro-enterprises for the most disadvantaged people and underprivileged women.

Amr Kamal, chairperson of the EALB, said the signing of this protocol comes in line with the change and innovation process adopted by the bank to provide innovative services and solutions to its clients. The bank believes in the importance of micro-enterprises for national economy and community development.

The agreement was signed by Hussain Abdel Mohsen, head of microfinance at the EALB, and Ahmed Khorshid, managing director of Tamweely, in the presence of Amr Kamal, chairperson of the bank, and Amr Abu Al-Azm, chairperson of Tamweely.

According to Kamal, this protocol was part of the bank’s plan to expand in microfinance projects for their economic and social importance through supporting the most poverty-stricken people and female breadwinners.

It is the bank’s duty to develop society, combat poverty, and raise the standard of living of individuals through financing specialised companies and NGOs, which have the ability to reach these social categories and study their needs, he said, adding that the protocol also supports sustainable development and financial inclusion.

According to Abdel Mohsen, the bank’s strategy was based on providing credit products that meet the needs of companies and associations working in the field of microfinance, in line with the needs and nature of the customers who contribute to the funding.

For his part, Abu Al-Azm stressed the importance of cooperation with the EALB for its expertise and board of directors with their professional vision in the field of microfinance, pointing out that the company was founded to achieve developmental, social, and investment goals.

He added this protocol aims to make the company act as the bank’s arm to reach the most necessitous groups and women, especially in the countryside.

Abu Al-Azm pointed out that the company aims to sign further similar protocols worth EGP 500m to be re-injected to the targeted groups. The company also aims to open 60 new branches across Egypt within three years.

The new protocol will open novel horizons for the company to activate and encourage microfinance, he stressed, adding it will be a step towards achieving the company’s developmental, social, and investment objectives by expanding its activity and volume of business in Egypt.