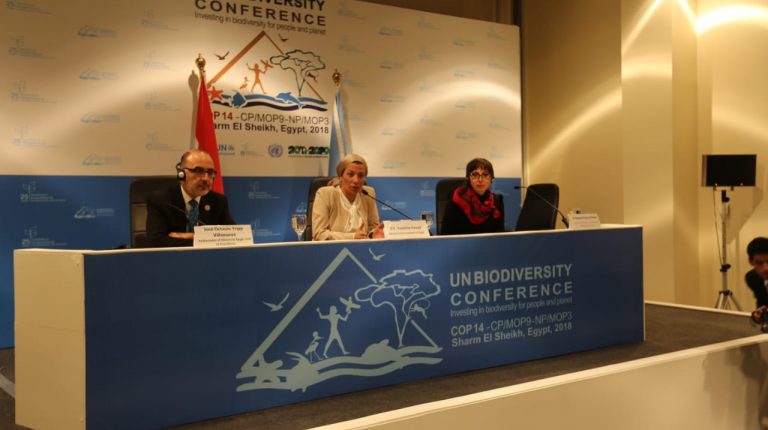 Egypt’s Minister of Environment Yasmine Fouad called on the international community for combining the three Rio environment agreements to fill funding gabs during the 14th Meeting of the Conference of the Parties to the Convention on Biological Diversity (CBD COP 14 Egypt) in Sharm El-Sheikh.

Fouad, who chairs this year’s meeting, joined a press conference on Saturday night with the participation of former president of the conference and the Mexican ambassador to Egypt Jose Octavio Tripp, and the UN Assistant Secretary-General and Executive Secretary of CBD Cristiana Pasca Palmer.

“The whole world is affected by climate change,” Fouad said.

The minister added that President Abdel Fattah Al-Sisi’s initiative to combining the three UN conventions supported by Argentina and Canada. The UN expressed its pleasure of Egypt’s commitment to the biodiversity conservation efforts, she stressed.

Fouad added that Rwanda –current president of the AU— stressed its support of COP14 under Egypt’s presidency in the coming two years.

Answering Daily News Egypt’s question about wildlife trafficking in and through Egypt, Fouad said that the ministry is working in a group of laws that will address wildlife trafficking, noting they are under discussion in the parliament. However, Egypt does not suffer from this problem as is the case in other African countries.

For her part, Palmer said that she agreed with Fouad on combining the three UN conventions on environment. She added the nature is one, but we fragmented the ways of addressing the environmental issues.

“It is very important on the national level to have coherence [between the three conventions], and all efforts are needed to facilitate their implementation,” Palmer added.

However, it is not easy job as the environment policies and implications are different in each country, Palmer explained.

She told Daily News Egypt that the world has exerted great efforts to implement the Aichi Biodiversity Targets for 2020 through adopting new standards on the national level, adding that the protocol objectives’ deadline is in 2020.