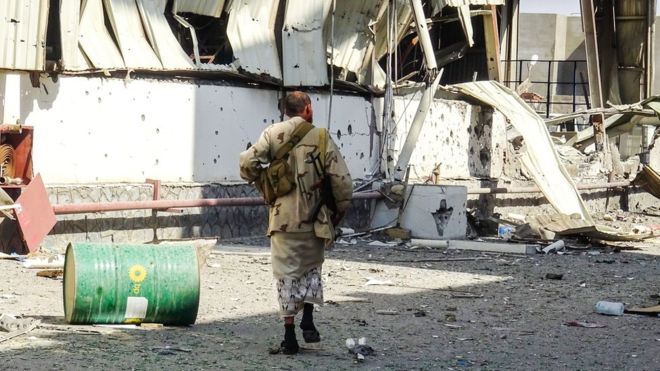 Fighting between the Saudi -and the UAE-led coalition and the Iran-backed Houthi movement broke out late on Monday in the Yemeni city Hudaydah, despite United Nation (UN) calls for a ceasefire to end the crisis in the war-torn country.

The Saudi-led coalition launched nearly 10 airstrikes against the Houthis positions in the city according to Reuters, following clashes between the Yemeni forces and the Houthis rebels.

Last week, the Saudi-led coalition, under Western pressure, ordered a halt on its intensive offence against Houthis in the Yemeni city.

Similarly, the Houthi rebels said they agreed on halting drone and missile attacks against Saudi Arabia after a request from the UN.

The UN Special Envoy of the Secretary-General for Yemen Martin Griffiths announced last Friday that the Yemeni forces and Houthis are committed on working towards a political solution. Griffiths added that he received “firm assurances from both sides, of a renewed commitment to attend talks.”

Since the fighting intensified in the rebel-held city located on the Red Sea, which is the gateway for food supplies to Yemen, hundreds of Yemeni people have been trapped in their homes inside the city due to the continued clashes, while thousands others fled their homes.

Saudi Arabia, which supports the embattled Yemeni President Abd Rabbuh Mansur Hadi’s government against Houthi rebels, intervened in the Yemeni conflict in 2015 to prevent the fall of Hadi.

Saudi and the UAE-led Coalition, backed by the US, have launched hundreds of strikes in Yemen, killing thousands of Yemeni people including civilians.

According to the UN Human Rights office, over16,000 civilians have been killed since the war began, most of them by the coalition’s airstrikes. Additionally, over 80% of the population are in dire need of humanitarian assistance.