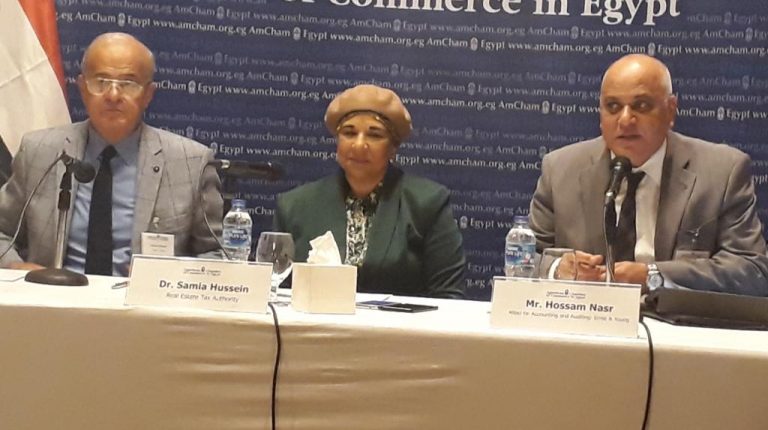 The Ministry of Finance is working on some amendments to the real estate tax law including cancellation of the Real Estate Taxation Authority’s (RTA) right to appeal the rental value evaluation reached by assessment and inventory committees, Head of the RTA Samia Hassan said on Tuesday.

This came during the meeting held by the customs and tax committee in the American Chamber of Commerce in Cairo headed by Hassan Hegazy, which was attended by a large number of members of the chamber and major companies.

She added that the amendments will also include the extension of the period allocated for inventory and evaluation, noting that there has been no re-evaluation of properties since the law came into force in 2013, as the evaluation is conducted every five years ending in December 2018, in accordance to the law.

The proposed extension will last until the end of December 2020, which means that the current evaluation will remain unchanged for two years. However, the parliament called for further extension of that period to three years.

Hassan revealed that the RTA aims to collect EGP 5.8bn in taxes during the current fiscal year, against EGP 3.2bn last year.

Hassan noted that owners of residential units should pay their taxes for this year before 31 December to avoid fines, as the law allows taxpayers to pay their taxes throughout the year.

The deadline for submitting tax declarations was extended until the end of June 2019 only for the owners of real estate units that are exempted from tax, if their properties’ market value is less than EGP 2m, Hassan pointed out.

According to the law, everyone who owns a real estate unit must submit its tax declaration whether the unit is subject to taxation or will be exempted.

This tax applies to all properties established on Egyptian land other than the non-taxable properties, whether rented or occupied by the owner himself who is the taxpayer, or if they are finished and inhabited, finished and uninhabited or inhabited and unfinished. This means that all current established properties are taxable, whether established villas, buildings, floating houses, or chalets wherever their locations are.

Hassan said a fine ranging from EGP 200 to EGP 2,000 shall be applied on taxpayers in the event they do not submit their tax declaration on time, adding that interest of delay in tax payment is calculated as follows: the Central Bank of Egypt’s discount rate + 2%.