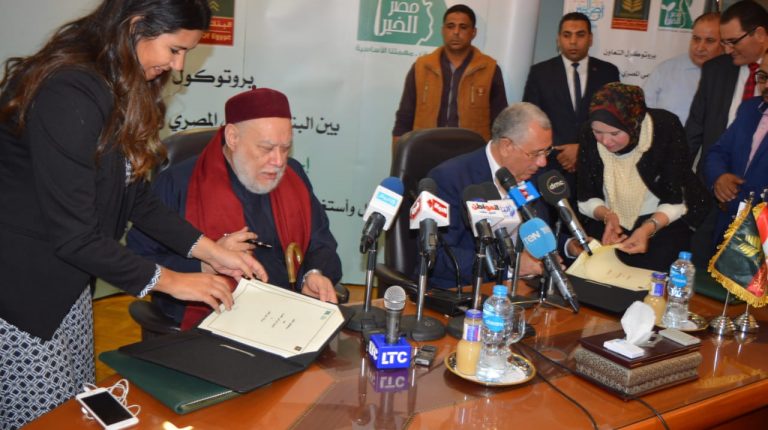 Misr El Kheir Foundation signed a protocol of cooperation with the Agricultural Bank of Egypt (ABE) to re-activate the maximum capacities, financing, and exploitation of livestock production stations in Egypt.

The signing of this protocol comes as part of an effective contribution to the government’s efforts to develop livestock, to bridge the red meat food gap, reduce costs and achieve balance in prices within the Egyptian market.

The cooperation protocol between the two sides includes the re-operation of the farms that need to be re-worked to maximise production and provide the financing required by ABE, in the framework of the initiative of the Central Bank of Egypt (CBE) to finance micro, small, and medium enterprises with a 5% declining interest rate, to boost investment in the livestock sector.

The protocol also includes Misr El Kheir Foundation’s supervision of all the farms that will join the initiative, provide technical support, and oversee the operation process in full to ensure continuity of the project.

According to Gomaa, this cooperation with the ABE achieves the most important goals of Misr El Kheir Foundation which are human development. They stressed that they have the largest farms in Egypt with a capacity of up to 100,000 cattle in the governorates of Upper Egypt and border provinces such as Assiut, the New Valley, Sinai, and the Bahariya Oasis.

He added that the volume of Misr El Kheir Foundation’s investments in these projects reached EGP 1.5bn in order to contribute to the development of the meat industry in Egypt, and employ about 3,000 youths so far.

This protocol comes as a confirmation of the great and continuous cooperation between Misr El Kheir Foundation and the ABE in various fields, especially the livestock production field, pointed out Gomaa.

According to Elkosayer, the size of deals with Misr El Kheir Foundation’s Ard El Kheir amounted to EGP 310m that was pumped to 740 beneficiaries to raise 14,740 cattle, Elkosayer remarked.

The ABE pumped EGP 500m to contribute to the National Project for Fattening Veal Revival, noting that this funded about 4,850 beneficiaries to raise 37,750 livestock in order to achieve a balance in meat prices in the Egyptian market.

He pointed out that the signing of this protocol comes to implement the Central Bank of Egypt’s (CBE) initiative to encourage micro, small, and medium enterprises, as a key factor to promote the national economy and reduce the unemployment rate. This initiative also contributes to bridging the food gap of red meat within the Egyptian market.

According to Elkosayer, the protocol provides the ABE financing to farm owners that are economically proven feasible to benefit young graduates, farmers, and livestock development employees.

Misr El Kheir Foundation has recently completed a year-long comprehensive geographical survey to study all farms of livestock that stopped working, including both private and public, to identify the problems of breeders and investors.

According to Misr El Kheir Foundation, this survey showed that the actual capacity of farms in all of Egypt’s governorates has put capacity at 3.2m livestock per year, while the current utilised capacity is 633,000 per year, putting the ratio at 20%.

Furthermore, Misr El Kheir Foundation’s activity in the livestock sector began through its subsidiary, Ard El Kheir, since 2011, beginning with one farm in Assiut with a capacity of 1,000 livestock.