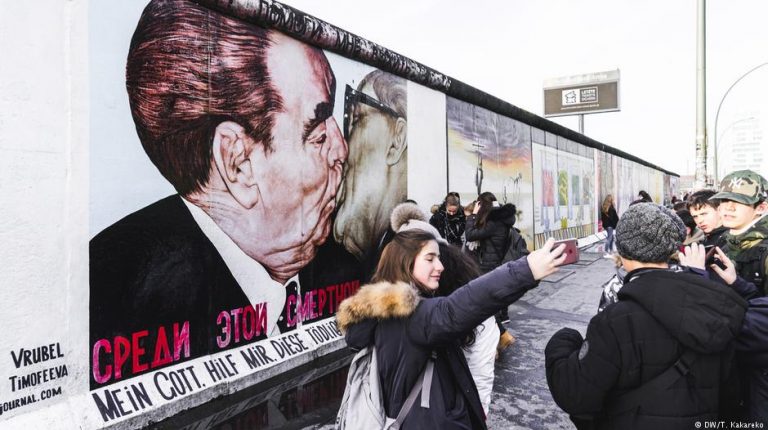 The East Side Gallery now belongs to the Berlin Wall Foundation, which aims to protect the famous section of the former wall that divided the German capital.There will be no further construction projects at Berlin's East Side gallery, the 1.3-kilometer remaining stretch of the Berlin Wall that has been covered with art, also known as the "world's longest open-air gallery," Berlin Wall Foundation director Axel Klausmeier said at a press conference on Wednesday.

Mediaspree, one of the largest property investors in Berlin, has had the strongest impact on the area surrounding the monument. Since the beginning of the 1990s, media companies, a large concert hall as well as office buildings and a residential tower were built around the East Side Gallery, while the bank of the Spree River behind the former section of the Berlin Wall was completely modernized.

Now the property surrounding the wall section has been transferred to the Berlin Wall Foundation and all development plans have been stopped. Berlin will contribute € 250,000 ($285,000) annually to the preservation of the monument and the maintenance of the area.

After the fall of the Berlin Wall in 1990, 118 artists from all over the world were invited to paint what would become the East Side Galley. In the years that followed, some of the works of art were removed; new ones emerged. The paintings that were most damaged by erosion and vandalism were renovated. Despite international protests, one section of the gallery was removed in 2013 to create luxury apartments.

A symbol of joy and opression

The protected area is now to be expanded into an educational and artistic memorial. Every year, around three million visitors come to the East Side Gallery, but it so far lacked a professional infrastructure for tourists.

Among other things, an exhibition on the history of the section of the wall is being planned, said Klausmeier. It will commemorate it on one hand as "a symbol of how the German division was peacefully overcome and on the other hand as a testimony of the inhuman border regime." At least 10 people were killed between 1961 and 1989 trying to cross this section of the wall.