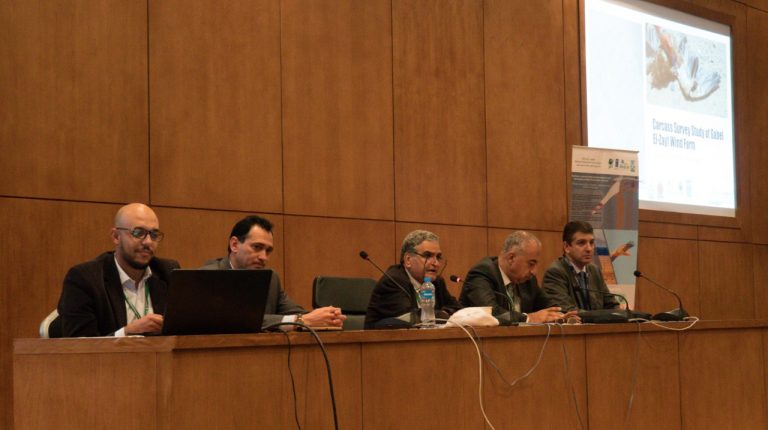 The energy committee of the Convention on Migratory Species (CMS) discussed in its third meeting on Monday the outcomes of the second meeting, and the procedures taken to protect migratory species through the plans and practices of the renewable energy sector.

The meeting came during the Conference of the Parties (COP14) which is being held in Sharm El-Sheikh from 17 to 29 November under the theme ‘Investing in Biodiversity for People and Planet’.

During the meeting, Osama Al-Gebaly, director of the conserving migratory species’ project in the ministry of environment reviewed Egypt’s efforts in this regard, particularly in the renewable energy projects in Jabal Al-Zait and the Suez gulf region, which is a critical region for migratory birds. Al-Gebaly added that the meeting also discussed expanding the framework of the convention and future research.

He added further that the project succeeded in helping safeguard migratory species and protect them from the turbines of the wind farms, as well as the decreasing the loss of electricity.

Meanwhile, a panel discussion addressed Egypt’s traditional handicrafts in protected areas, and their role in conserving biodiversity and environmental tourism.

Yousria Hamed, director of the third phase of the Egyptian-Italian environmental project, reviewed the project’s efforts to support local communities in a number of protected areas.

Discussions also presented samples of traditional handicrafts in Wadi El-Gemal National Park, a protected area, and a local woman from the community of the protected area spoke about the role of the project in changing her life and providing her with training and support.

Simultaneously, the Arab group which is participating in the COP14, supported in their second coordinating meeting, the Egyptian initiative for combining the implementation of the three Rio environmental conventions, and for the aim of the conference which is investing in biodiversity for people and the planet.

They also stressed the necessity of inviting the private sector to invest in biodiversity and providing the needed guarantees and motivations. The meeting also asserted the importance of forming an Arabic team to be able to mobilise Arab priorities, as well as enhance coordination between Arab countries.