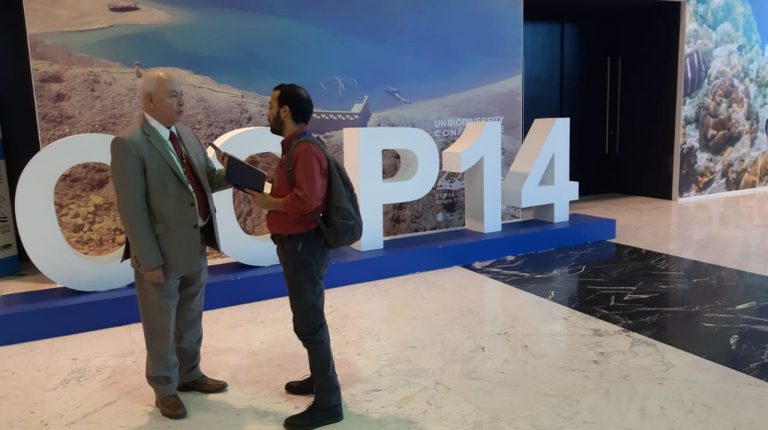 Over 9,000 people have registered in the 14th Meeting of the Conference of the Parties to the Convention on Biological Diversity (CBD COP 14), however only 6,000 actually attended the COP 14, and about 2,000 others only participated in talks for the Nagoya protocol and Aichi biodiversity targets, Hamdallah Zedan, chairperson of preparatory committee for the CBD COP 14, said.

During the COP14, held in Sharm El-Sheikh from 17 to 29 November under the theme ‘Investing in Biodiversity for People and Planet”, Daily News Egypt had the chance to interview Zedan.

He said that all developmental sectors, including mining; energy; housing; infrastructure; health; agriculture and manufacturing depend on biodiversity, as well as water resources.

Zedan explained that these sectors can affect biodiversity through their developmental processes. “One of this conference’s goals is to encourage nations to consider the environmental aspect in the development processes,’ said Zedan, giving an example of establishing a new city which, he said, should be designed in accordance with the spatial planning of the area and include protected areas.

The process depends on the environmental impact studies which were conducted by the ministry of environment.

Zedan stressed that “there is nothing called combining the Rio environmental conventions,” saying that the three conventions will stay separate, but the presidential initiative aims to organise their implementation on the national levels.

Zedan illustrated that the initiative focuses on the environment-friendly procedures that can help-if they were applied-in decreasing the levels of degradation in the ecological systems, climate change, and combat desertification. He believes that the joint application of the three conventions will contribute towards achieving coordination and decreasing costs.

According to Zedan, climate change is related to biodiversity as the main reason of climate change is carbon emissions that come as a result of burning plants. “Plants absorbs carbon and stock it, so when we burn plants it emits the stock of carbon, so it is not just not doing its job in absorbing carbon, but also it turned to an emitter and source of carbon, increasing the impacts of climate change” Zedan said.

The environmental official also told DNE that coral reefs and mangrove trees are among the major means of countering climate change through absorbing carbon. He added that Egypt is expanding its mangrove cultivation along the Red Sea coast. Egypt is not planting mangrove in the Mediterranean Sea coast because the plant needs specific environmental conditions that are not available in the Nile Delta coast, according to Zedan who added that planting mangrove takes years.

Regarding the ministry of environment’s roadmap for the next phase, Zedan said that Egypt, as the chair of the conference, has more duties and missions to do to enhance the environmental work and implement the conclusions and outcomes of the COP14.