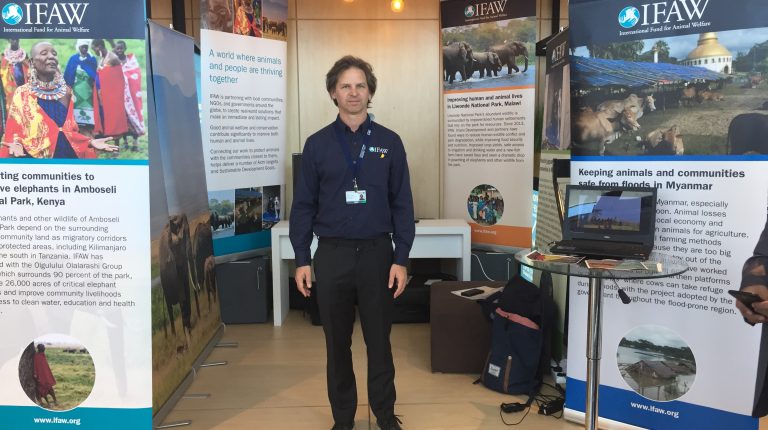 As part of the Conference of the Parties – COP14, a Biodiversity Innovations and Solutions Fair – BISF, is being held, and attracted participants from all over the world, drawing in non-governmental organisations, youth initiatives, and universities.

Andreas Dinkelmeyer from the International Fund for Animal Welfare – IFAW, told Daily News Egypt that he is participating in the fair and the conference representing his organisation in cooperation with the Convention on Biological Diversity – CBD.

The IFAW’s participation the COP14 aims to introduce themselves to the audience of the conference as an organisation working in the field of saving the fauna. Part of the organisation’s work is in the Kenyan national park of Amboseli.

“We are convinced that you can only protect national parks, wilderness, and wildlife if you work with the local communities that live with wildlife and around these national parks,” Dinkelmeyer told DNE.

He added that the IFAW is working with local communities through three avenues such as supporting scholarships for education, considering allowing women to gain more economic benefits, and training national wildlife protecting agencies. Countering wildlife trafficking is also part of the organisation’s interest such as ivory illegal trading.

The Global Youth Biodiversity Network – GYBN, also participated in the conference with a stand targeting youth who are participating in the COP14. Josefa Isabel, from the GYBN informed DNE that the organisation is the main organiser of the youth delegation from all over the world.

“We are participating in the COP14 by their new campaign ‘Future for Biodiversity’ and we invite everyone to choose our badges and postcards which hold an environmental message” says Isabel.

Gerrit Ohm from Germany, one of the GYBN’s event organisers said that their campaign aims to raise awareness over the importance of achieving the Aichi 20 targets through badges that hold the targets as motivators to do something regarding the biodiversity issues.

They also aim to attract delegates from all over the world who came to Sharm El-Sheikh to participate in the COP14. According to Gerrit and Josefa people, particularly youth, are attracted in their stand and interested to know about their targets and work.

They said that they have worked very hard during the past years to gain recognition from the CBD and participate in the COP.

Natalie Assiouty and her colleagues in the Nature Conservation Egypt, launched a project called the Wadi Degla Virtual Museum. The project aims to raise public awareness over the importance and value of the Wadi Degla Protectorate, which is located in Cairo.

Assiouty who is the communication officer of the NCE told Daily News Egypt that the project depends on using Virtual Reality to bring the public closer to the natural heritage of the area in the form of three 360-videos, as it allows them to see the geological history of the protected area and biodiversity and ecosystem.

“We are participating in the Biodiversity Innovations and Solutions Fair as part of our participation in the COP14, in order to provide innovative solutions for conserving nature,” said Assiouty.

She added that their project of the Wadi Degla Virtual Museum is funded by the Global Environmental Facility (GEF) Small Grants Programme (SGP), with co-funding from NCE. They are also coordinating with the Ministry of Environment and Wadi Degla Protected Area.

A branch of the Wadi Degla Virtual Museum will be available in the guests’ centre in the protected area soon so that it could provide the visitors more information about the area, she said.