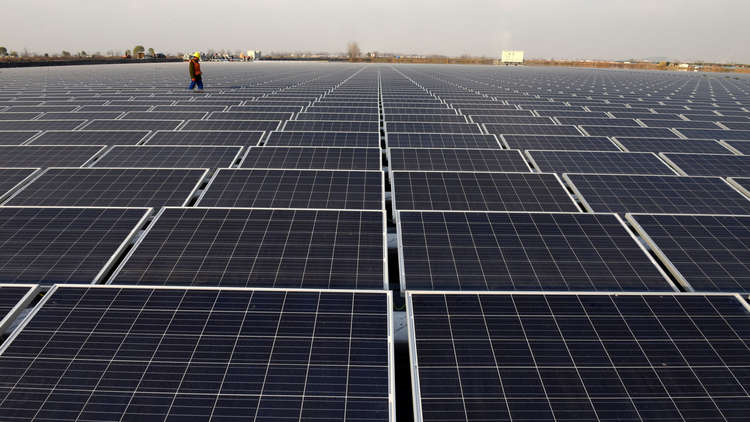 Daily News Egypt toured Benban village, which is the nearest residential area to the solar energy projects on the west bank of the Nile, about 35 km from Aswan.

On the main road leading to the village, there are several electric towers for the transfer of the capacity produced from the solar plants to the national electricity grid. Many trucks are heading to the station’s site, and other cars transport the employees to the projects. The solar power plants have contributed to creating jobs fro the youth and a means for them to escape poverty and unemployment.

People in Benban know one another. They know all the details of the solar energy projects, especially after Hassan Allam Asset and Property Services held sessions and discussions with them.

On the southern entrance of the village, Benban’s secondary school offers special vocational training on the installation and maintenance of the solar cells. But poverty and neglect still shadows the village which is drowning in sewage. Residents have high hopes for the energy projects to turn the situation right-side up.

While walking in the village, we found that the health clinic there was closed at 11am. Residents said it has always been closed as no doctors worked there, and they urged the government to build a hospital to treat them from kidney failure and liver diseases.

“The energy projects saved the village from poverty and unemployment. We need development and better services,” said all the village residents, who, at the same time, refused financial aid from investors. Instead, they called for community participation in improving the village which has become home to multi-billion-dollar projects.

Mohamed Hassan Al-Omda, a village resident, said that the solar energy projects are very large and contributed to changing the village, as well as provided jobs for all youth in the fields of supply, constructions, transport, and labour.

He explained that the village people are ready to work in the projects either during the construction period or after completion of implementation, especially since the village conditions are very dire as it only relies on agriculture.

Magda Eid, a housewife, said that all the people are happy with the projects, but the wage granted to employees is very small. “My son works there for only EGP 100 per day. This needs to be increased.”

The most important challenge in the coming period is temporary employment. Eid stressed that after constructions are completed, many youths will be unemployed once again.

She called on investors and companies to provide jobs for women in solar projects to improve their income levels.

Hassan Allam Services has agreed with several women in the village of Benban, to weave protective clothes for project employees and is seeking increased women’s participation in the coming period through various services.

Eid noted that the village suffers from severe poverty and deterioration in health, education and sanitation services, and called on the participation of investors and companies involved in solar projects in the improvement of services and the development of the village.

Abdul Aziz Al-Azzayzi, a resident of Benban, said that the solar energy projects are a second high dam. “The vast majority of youth have been employed in the stations. There has been a great economic boom in the village and a large number of foreign engineers are living in the village now,” he added.

He stressed the need to complete the sewage project, which recently stopped. “How can Benban be the capital of solar energy, while its residents are drowning in sewage?” he asked.

He pointed out that the state began to take care of development in the province of Aswan, which appears during the talks of all ministers. “We hope the village sees real change,” he said.

Aswan is planning to set up a solar cell plant within the service area to be inaugurated in the section facing the solar power project site in Benban.

Aswan Governor, Ahmed Ibrahim, told Daily News Egypt that they plan to set up an integrated services zone facing the site of the projects, which would include a vocational school to train the youth on renewable energy works and a training centre specialised on the technical aspects of solar energy production.

He explained that he commissioned the Manpower Directorate to prepare a comprehensive inventory of the current employment of the solar energy projects in Aswan, as they will not allow citizens to benefit illegally from the project.

Ibrahim said that he coordinating with the investment company managers to widen the roads leading to the project in order to organise traffic and avoid any accidents.

He highlighted the importance of completing the field study related to achieving community development in the solar energy projects, which aim to provide general ideas and services to the people of the neighbouring villages of this project, especially in the sectors of education, health and transportation.

Furthermore, he pointed out that he will sign a protocol with the Academy of Scientific Research to conduct a comprehensive study regarding the groundwater problem at the province level altogether.

Minister of Electricity and Renewable Energy, Mohamed Shaker, said that Egypt succeeded in attracting Arab and international companies to invest in renewable electricity generation projects and provided them with the legislative climate through the development of mechanisms and controls for investment.

He explained that the rates of completion of the stations are going well, and that he always communicates with the chairperson of the New and Renewable Energy Authority (NREA) and investors to remove any obstacles and complete the implementation of the stations without any problems.

Furthermore, Shaker pointed out that the projects of solar energy in Aswan resulted in tremendous development in the area of Benban and provided many jobs for young people in the field of installation, construction, operation and the maintenance of stations.

“Soon we will see operation tests for some projects,” he said.

The implementation of such projects requires the need for a strong legislative structure, which has been recently simmering evidently by discussing several laws related to energy, Shaker declared.

Head of the NREA, Mohamed El-Khayat, said that there are good and positive indicators for the solar energy projects in Aswan. The real success is the companies’ desire to invest and to obtain other projects despite the end of the feed-in tariff scheme.

Moreover, he stressed that Egypt is taking concrete steps as the International Finance Corporation (IFC) is leading a coalition of nine banks that invest in Egypt’s renewable energy sector for the very first time.

He added that the ministry of electricity did not only focus on the solar energy projects in Benban, but is in the negotiations on several wind farms and other solar power plants projects in the Gulf of Suez and Kom Ombo, as part of its plan to produce 20% of electricity from renewable energy by 2022.

One of the community outreach tools of the projects is the Community Advisory Committees. It is a tool that provides a platform for continuous communication between the projects and the surrounding communities. These committees are composed of community representatives that meet regularly to discuss issues of common concern.

Father Mousa Rafla, priest of Archangel Michael Church and member of the advisory committee, said that solar energy projects brought about a qualitative leap that had an impact on all families. “All youth in the village are working in the solar plants projects. Any person seeking a job now can find one. The beam of the solar power plants is shining in Benban,” he added.

Rafla noted that unemployment was high prior to the projects, while most villages suffered from neglect. He added that they want more development to reach the village across the fields of healthcare, sanitation, and education.

Gabrallah Abdul Halim, a member of the committee, said that the solar energy projects have brought young people employment opportunities. “The tasks of the community advisory committee include holding continuous sessions with developers and tribes to see the demands of the people and their needs to complete the projects without problems,” he added.

Abdul Halim noted that the village needs to have a basic sanitation and sewage system, adding that they agreed with investors to provide medical supplies and ambulances.

Aamer Abdul Wadood, chairperson of Al Mansouriya Sons Company for Supplies, is a model of a young man whose life completely changed after the announcement of the solar energy projects in Benban, where he decided to change his career to set up a catering company.

“The solar energy projects encouraged me to set up a catering company and restaurant, after the recession I was suffering from. I agreed with the relatives of those who work in the field of tourism to work in the restaurant after they were sitting in their homes following the current deterioration of tourism sector,” he said.

He added that his company applied in tenders for the supply of food and meals, and won the right to cater to four companies and is currently providing 400 meals per day with plans to reach 1,000 meals through other tenders it is competing in.

He explained that the cost of establishing the company and the restaurant amounted to EGP 200,000. It is now employing 10 employees in both night and day shifts. The restaurant is only 70 sqm but all the companies encourage them to continue given the high quality of the food.

He noted that many workers in solar energy projects visit the restaurant in the evening after they finish work, and others with their families, which he did not expect.

According to a number of experts, the demand of foreign and Arab companies on solar energy projects was fuelled by the regulatory controls and attractive tariffs offered to investors by the Egyptian Electricity Transmission Company (EETC).

The former Head of Egyptian Electricity Regulatory Authority, Hafez Salmawy, said that the attractive tariff set by the EETC to purchase the power from the power plants at 8.4 cents was a key factor in the companies’ commitment to invest in solar energy in Egypt, and paved the inclination for investors to seek partnerships or buy shares to increase the size of their projects.

He pointed out that the private sector and foreign companies will expand during the coming period in the implementation of renewable energy projects with different contractual systems, whether the build-own-operate (BOO) or independent producer, in conjunction with the introduction of competitive bidding in the Gulf of Suez and the West Nile.

Mohamed Salah El-Sobky, former head of the New and Renewable Energy Authority (NREA), said that Egypt was very late in using solar energy applications and that the opportunity of international companies investing in Egypt should be exploited to create jobs and offer real development in the Benban area of ​​Aswan.

He pointed out that international companies flock to Egypt to participate in the projects put forward by the EETC and NREA in its plan to produce 20% of electricity from renewable sources by 2022.

Filipinos want to boost green energy — but where will they get the cash?