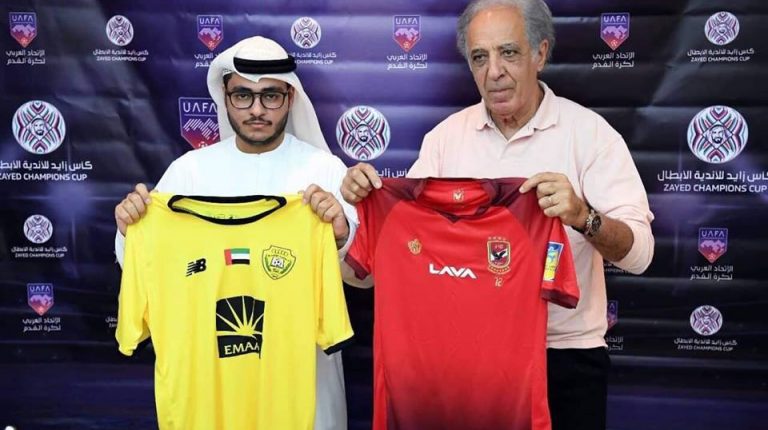 This Thursday, Al Ahly will be meeting his Emirati counterpart, Al Wasl, on the pitch of Zaabeel at Al Wasl club in the second leg of the final of the Arab championship.

Al Ahly needs to win in order to ensure it qualifies for the quarter-finals of the championship, especially that it saw a 2-goal withdraw against Al Wasl club at the first leg in Borg El Arab stadium.

Out of the list were Ahmed Fathy; Mohamed Hany; Tunisian Ali Maaloul and Amr Al Soulih due to an injury, in addition to Ahmed Hamdy and Mo’men Zakaria for technical reasons.

The technical body of Al Ahly, led by French Patrice Carteron, goes by the motto “No alternative for a victory against Al Wasl” in order to qualify for the quarter-finals of the championship to make it up to the angry fans after losing the title of the African Champions League against EST.

This game is the last chance for the French coach with Al Ahly. If the team loses, his situation will be worse and he might have to leave for a new technical coach to be hired to lead the team during the upcoming period.

Carteron has sat several times with the players of Al Ahly to demand from them to focus during the game and make use of the chances available before them to score goals from the beginning of the match.

Furthermore, Carteron has warned the defenders of the team from making mistakes during the match so that the rival team does not score goals that would make the game harder for Al Ahly later, as Al Wasl team will start the game with high morale given the two goals it scored in the first leg.

The sale points of the tickets of the match have seen a great demand by the fans, as many fans of Al Ahly who are living in the Emirates were keen on buying the tickets to support their team.

On the other hand, the state of Mahmoud El Khatib, the chairman of Al Ahly club, has been stable after his surgery in Germany to remove a tumor in his neck that affected his spinal cord.

El Khatib was moved to a regular room in the medical centre in Germany after his state stabilised. The doctor asked him to stay away from mental stress over the upcoming period to avoid a relapse.

In another context, Sayed Abdelhafeez, the former star of Al Ahly, is following-up the football sector and will be presenting his report on candidates to El Khatib following his return from Germany over the next few days.

Egyptian star Mohamed Salah, the player for English Liverpool, has become a candidate for the “best player in Africa in 2018” award by the BBC for the second year in a row after he won the award last year.

Mohamed Barakat and Mohamed Abo Treka have been the starts of the golden generation of Al Ahly and Egypt’s national team. They both won the award before, as Barakat was the first player to win it in 2005, then Abo Treka in 2006, and Mohamed Salah followed as the best player in Africa.

But what have these three Egyptian stars offered to win the title? This is what we will look at next.

In 2005, Barakat radiated in Al Ahly under the leadership of Manuel Jose who managed -at the time- to lead the team through the Premier League and the African Champions League as well as the Egyptian Super Cup. Barakat was the scorer of the Champions League by seven goals. He played with Al Ahly in the World Cup in Japan for the first time in the club’s history.

Barakat had the final world in Al Ahly’s qualification for the final of the African Champions League after scoring three goals in Al Zamalek’s net in the first and second legs of the semi-finale of the championship. Then he scored an amazing goal against Étoile du Sahel in the finale.

Aboutrika sparkled in the 2008 season. He was entitled to win the CAF award, had it not been for the injustice he suffered in giving the award to Emmanuel Adebayor, Arsenal star at the time, but Aboutrika’s efforts in that season won him the BBC award.

Aboutrika led Al Ahly in 2008 to win the Super League title and the Super Cup, as well as the African Champions League. He also spearheaded the national team to win the African Nations Cup, having scored the winning goal in the final game against Cameroon.

He won the African Player of the Year award in 2017 after impressive performance with A.S. Roma and Liverpool.

Mohamed Salah scored 19 goals in his last season with A.S. Roma. After transferring to Liverpool, he surpassed all expectations, becoming their top scorer with 19 goals. He was granted the award in December 2017. He was the top scorer in the Premier League with 13 goals after 16 rounds. Moreover, he led the Pharaohs to qualify for the World Cup 2018 for the first time after 28 years. Salah scored two goals to beat Congo, the last of which was through a penalty in the 95-minute mark, thus awarding Egypt a seat in the World Cup.

Salah’s fortune to win the award this year is high. He won the Best Player Award in the Premier League in 2018 and as Golden Boot award, which is granted to the season’s top scorer after burying the ball 32 times.

The 26-yeard-old Mohamed Salah helped Liverpool reach the final of the Champions League against Real Madrid, having scored 10 goals. He also scored Egypt’s only two goals in the World Cup 2018.

Salah scored eight goals, assisted in four more in 17 games with Liverpool across all English and European competitions this season.

12 National teams have made their way to the CAF Africa Cup of Nations (CAN) 2019, in addition to the host team Cameroon. The competition will be held in June next year after the fifth round of the qualifiers concludes.

In the first group, Senegal and Madagascar qualified, while Morocco advanced from Group B alongside Cameroon.

Mali managed to qualify from Group C after beating Gabon 0-1, while Nigeria qualified from Group E after a draw with South Africa 1-1.

Our national team, as well as Tunisia, have also confirmed their participation from the 10th Group.

The CAN 2019 will see five Arab teams for the first time, after Tunisia, Egypt, Morocco, Algeria and Mauritania, qualified following the fifth round of the qualifying round and before the sixth round and final round to be held on 22 November.

Mauritania won their first CAN seat from the ninth group after beating Botswana 1-2, making it the fifth Arab team to qualify, in addition to Uganda team from the twelfth group.