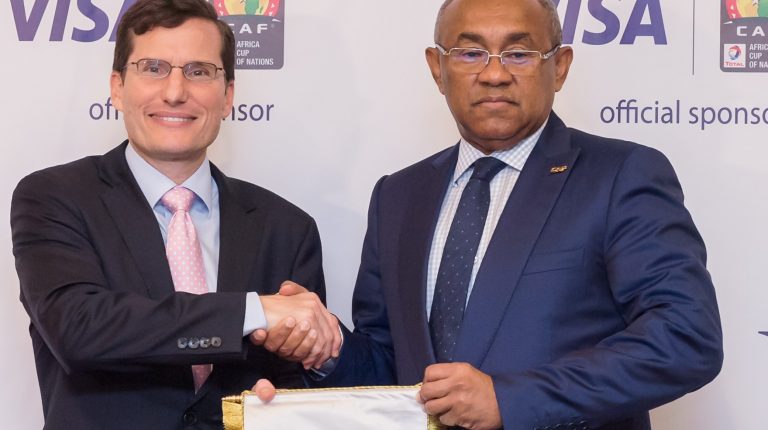 Visa, the global leader in payments, will bring its global brand and technology to African football this summer, as it officially announced its partnership with the Confederation of African Football (CAF), as a sponsor of the Africa Cup of Nations (AFCON) tournaments in 2019 and 2021.

The sponsorship deal will make the payments giant the exclusive payment services provider at all venues during the AFCON tournaments in 2019 and 2021, and will be the preferred payment option for tickets bought both in-person and online. In addition, Visa will be the official partner of the player escort programme, giving over 1,100 children the opportunity to lead their football heroes out at the AFCON matches.

Visa has a long and proud history of supporting football, having been a sponsor of the FIFA World Cup since 2007. Coming off the back of a successful 2018 FIFA World Cup campaign in Russia and with preparations underway for the upcoming FIFA Women’s World Cup France 2019, this association builds on Visa’s strategy to bring the best of their sponsorship experience on the global stage to regional tournaments.

Ahmad Ahmad, president of the CAF, said “The benefits of investing in African football are clear to see, and with football being the number one passion of consumers across the continent, we are delighted to welcome Visa as a sponsor of the AFCON tournament. Through this partnership with the CAF, Visa will be able to connect further with its customers and leverage the CAF as an innovative marketing platform. Africa is now more connected than ever before, and Visa’s payment network will play a vital role in reaching and rewarding fans across the region. I am certain that together we will take African football to the next level.”

“Football is the most popular sport in the world with an estimated 4 billion fans, and the sport intrinsically aligns with Visa’s values of acceptance and inclusion. The Africa Cup of Nations tournament is arguably the most important football event in our region, where the best of African football comes together. We are very proud to begin our association with the CAF, Lagardère Sports, and the AFCON tournament to support the growth of football in our key markets,” said Andrew Torre, regional president of Visa at Central and Eastern Europe, Middle East, and Africa (CEMEA).

Germany: Could this crop of youngsters force Joachim Löw's hand?