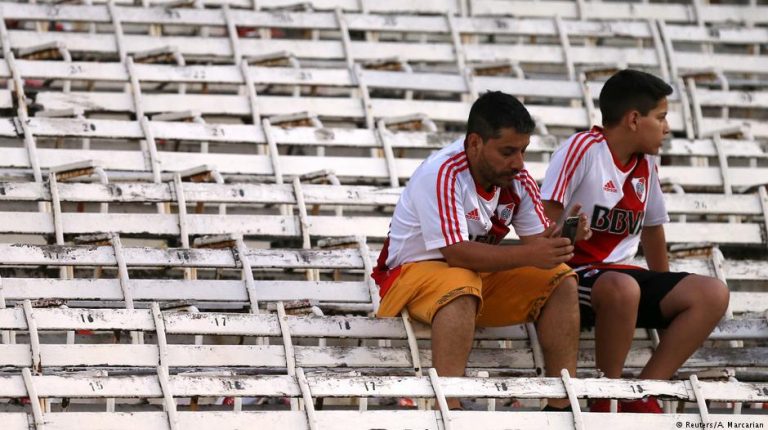 The second leg of the Copa Libertadores final has been postponed for the second time in as many days following an attack on the Boca Juniors team bus. It’s unclear where or when the game will be played.The much-anticipated Copa Libertadores second leg between the Buenos Aires arch-rivals River Plate and Boca Juniors, known as the Superclasico, was due to be played at 2100 CET on Sunday after initially being postponed on Saturday following the attack near River's Monumental stadium.

It left Boca players with injuries from shards of broken glass and suffering the effects of tear gas inhalation.

"There isn't a level playing field to play the final. That is why Conmebol have taken the decision to postpone the final of the Libertadores and to call a meeting of the presidents of both clubs in Asuncion to find a new date," Conmebol president Alejandro Dominguez said.

Despite pressure from TV broadcasters and FIFA president Gianni Infantino to push ahead with the game, South American football's governing body took the decision after Boca called earlier on Sunday for a postponement and demanded that River face punishment, suggesting a series of measures including forfeiting the match.

"After the acts of violence suffered in the vicinity of the stadium, Boca … requests the suspension of the game, as well as the application of the corresponding sanctions provided in Article 18," Boca said in a statement on their website.

Among the sanctions available under Conmebol's Article 18 are "disqualification from competitions and exclusion from future competitions".

It includes other options, including a fine, the deduction of points and being forced to play a game behind closed doors.

With the tie level at 2-2 following the first leg, it remains unclear as to when the second leg will be played.