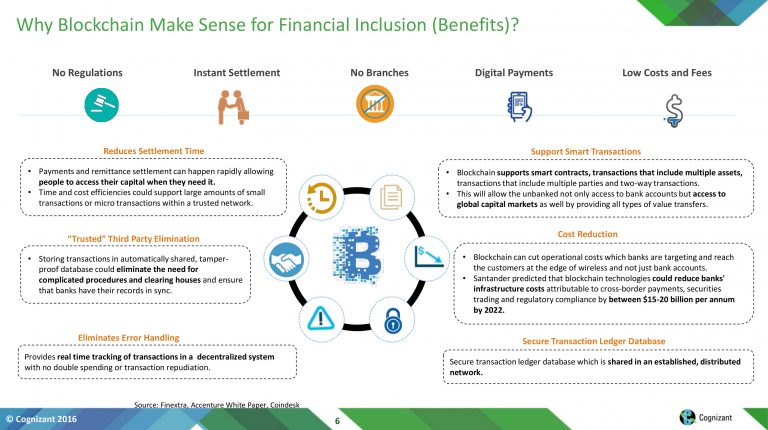 There is no denying that the world has revolutionised every aspect of modern society, from business to communication to entertainment. With the spread of high-speed internet throughout the entire globe, information is more accessible than ever before.

All these lead to increasing numbers of mobile devices and cloud services, cross border payments, decreasing trust in traditional payment methods, which consequently lead to the appearance of significant numbers of new payment services and service providers, and subsequently the emergence of technology for peer-to-peer payment maturing.

However, there are still about 2.5 billion people worldwide and over 200m businesses excluded from access to banking and other financial services, according to McKinsey, the global management firm.

According to recent data, as much as 54.0% of the world’s population have no access to financial services of any kind. For developing countries, the percentage is as high as 70% of the population.

As defined by the World Bank Group (WBG), financial inclusion entails that “individuals and businesses have access to useful and affordable financial products and services that meet their needs—transactions, payments, savings, credit and insurance—delivered in a responsible and sustainable way.”

Notably, the first cashless payment was introduced in the 1950s, since then, various e-payment instruments have been introduced. SMS payment, plastic cards (debit, credit and ATM Cards), electronic transfer (e-transfer), internet banking, virtual wallet (Google wallet) and virtual currency (Bitcoin) are the key innovations of the past few decades, which contribute to the emergence of a cashless society. Technological revolutions, especially in the fields of information and communication, expedited the development and improvement of cashless applications and instruments for both individuals and organisations.

Also, it delved deeper into understanding the obstacles which impede the transformation of the society to a digital society, in terms of having a cashless society and in having blockchain, as well as knowing the government’s target through interviewing the two industry experts, the transcript for which is below, lightly edited for clarity.

The most important thing is to first understand where Egypt stands from the digitised world. Notably, Egypt realises the risks and the impact of cash transactions on economic development and growth, thus it has taken significant moves towards achieving financial inclusion, by launching a number of initiatives with the aim of building a cashless economy and enhancing financial inclusion.

In November 2016, President Abdel Fatah Al- Sisi launched the National Council for Payments (NCP), which he chairs himself, in an aim to lead Egypt toward a cashless society.

Moreover, in February 2017, Al- Sisi issued a decree establishing the council and delineating the scope of its responsibilities. The council aims to reduce the use of banknotes outside the banking system, impelling electronic payments and modernising the national payments systems.

Speaking at the opening of the Financial Inclusion Forum held in Sharm El-Sheikh in September 2017, Al Sisi announced that financial inclusion is considered one of Egypt’s main targets.

In that context, the Central Bank of Egypt (CBE) also took part in various local, regional and global initiatives to indicate financial inclusion as a top priority during the last few years, particularly widening the scale of financial inclusion in Egypt.

In July 2017, Egypt, China and Mexico were selected as model countries in the World Bank’s (WB) Financial Inclusion Global Initiative. The three countries are already part of the Universal Financial Access 2020 (UFA2020) initiative, led by the WB, aiming to bring 2 billion unbanked adults in 25 countries into the formal financial systems.

Thus, the Egyptian government also focused on digital transformation as one of the most prominent files, aiming to provide excellent services to the citizens electronically.

In that term, the Minister of Communications and Information Technology, Yasser El- Kady, declared earlier that by the end of 2020, Egypt’s digital transformation will be announced after the implementation of the strategy to digitise the country, known as “Digital Egypt”, pointing out that by the end of 2019, all government services will be offered electronically.

Advantages and obstacles of being a cashless society

According to the McKinsey report, financial inclusion based on deployment of digital finance could add some $3.7tn to the GDP of emerging economies by 2025, amounting to about 6% of the GDP. An additional job-creation for 95 million people could also be created by deploying digital financial solutions while widening access to financial services.

For his part, e-finance’s chairperson Ibrahim Sarhan told DNE that developing a cashless society will not only help in the development of an individual but also help in producing a progressive society, highlighting that in the presence of a cashless society, people can enjoy both social and personal benefits.

He explained that using e payment methods and financial inclusion will reflect positively on Egypt’s economy and society, explaining that it will help in achieving fairness among citizens, as there will be centralised data bases which have all the person’s information.

Sarhan also mentioned that it will help in eradicating corruption due to the absence of a middle person.

E-finance’s chairperson, stated that Egypt now faces fewer obstacles than before in terms of being a cashless society, due to the implementation of the NCP, which led to taking a group of decisions instead of having a decision that only one institution agrees on.

He also noted that peoples’ lack of awareness was a great obstacle before, elaborating that currently people have become more aware than before, explaining that for the first time in Ramadan, Egypt launched awareness advertisements to encourage citizens to open bank accounts, and also to use mobile payment methods.

He continued by saying that there are four pillars which guarantee the success of implementing a cashless society, including the method of encouraging the people in order to become a cashless society which should be both mandatory and motivational, registering that Egypt previously used the mandatory approach only but currently it is using both, urging people to open bank accounts as this will benefit both the individuals personal’s financial standing as well as the country’s economy, as the majority of the population are still unaware of the benefits and impacts of cashless transactions upon their personal economy.

He ascertained the importance of designing a subject in schools which helps in raising the awareness of students regarding digital transformation, including how to deal with social media, information security, ways of research, etc.

Hagag proceeded to say that people still do not know how to smoothly and safely deal with technology.

“Egypt is in great need of awareness raising and transforming the culture of Egyptian citizens towards using technology in general and towards digital transformation in specific,” he specified.

He also insisted on that as soon as Egypt transforms into a digital society, there will be a centralised data base, hence, by entering the citizen’s ID number, all the person’s information will appear to you, which will consequently eliminate many crimes, including bribery, cheating, counterfeiting, etc.

Hagag added that it will also provide a censorship on citizens, ending corruption, giving the example that in a digitally transformed society, if a state employee bought anything worth EGP 10,000, and since his information is interconnected, once he enters his ID number, we will find out that his salary is only EGP 20,000, so this will raise suspicion as to whether he accepts bribes or not.

He noted also that by knowing all the citizens’ income, the country could calculate, and fairly estimating taxes, which will also end tax evasion crimes.

Hagag pointed out that this will additionally help in offering subsides to the really needy people, which will consequently increase Egypt’s national income, because there is a lot of money which is wasted, as there are tax evasions, whereas some people took subsidies where they do not need it.

“It will also of course eliminate bureaucracy and routine,” he stated.

As Internet users are most concerned with the security of their money and financial information online, therefore countries operate via blockchain technology that constantly verifies each transaction, purchase data through a system.

So, talking about digital transformation and financial inclusion leads DNE towards the topic of also having a blockchain technology.

He continued to say that the blockchain is very crucial in real estate, as it helps buyers know the sequence of the property’s ownership.

“Thus, the presence of the blockchain increases the credibility, and it also allows the possibility of border-crossing between countries, for example someone in China can buy property in Egypt without visiting Egypt, which will lead to more flexibility in the real estate sector,” he said.

The IT expert added that buyers will have increased trust that the item they will purchase is valid and its papers are proper without embezzlement.

“Egyptian citizens still do not have experience, talent, privacy or knowledge about information security, so it will take time for them to operate on the blockchain technology,” he asserted.

He insisted on the need for increasing raising of people on many scales including the public, governmental, students, parents, and teachers, in order to create a foundation that will contribute to fostering the technology, and information security awareness through short-terms plan.

During that time, we could use this foundation, building on capabilities of the new generation to enable to innovate and be creative in technology.

Finally, what DNE concluded after conducting these interviews, is that Egypt is heading in the right direction towards digital transformation, yet there still is a great need to raise citizen awareness on how to smoothly and safely use technology.

You are hacked… Cybercrime is becoming new threat for businesses