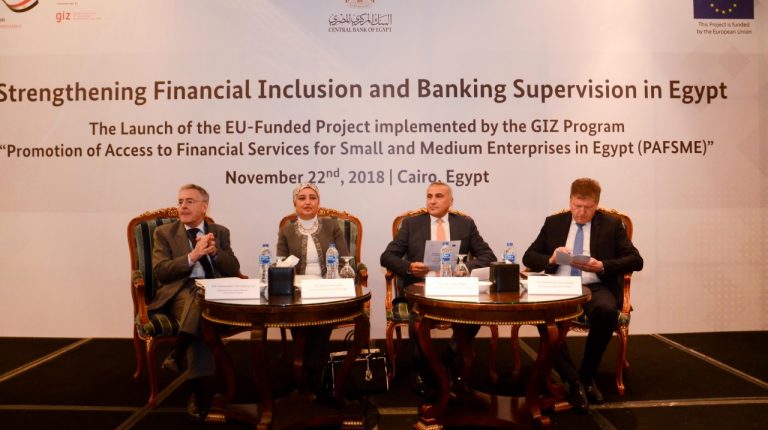 During a panel discussion on 22 November 2018 in Cairo, the Central Bank of Egypt (CBE), the German embassy and the European Union (EU) launched a project on “Strengthening Financial Inclusion and Banking Supervision in Egypt”.

Through this project the EU will provide €3.2m in the form of technical assistance for three years, to assist the CBE in further strengthening its banking supervision and boosting financial inclusion.

The CBE has brought the promotion and coordination of financial inclusion among the various national stakeholders to the forefront of its development policy agenda, to create the conditions in which Egyptians, particularly those who are underserved by the financial system, are able to save safely and build up resilience against financial shocks, and Micro, Small and Medium Enterprises (MSMEs) are able to access finance, invest, grow, and generate more employment opportunities.

On the national level, financial inclusion has also become a priority with the launching of the Sustainable Development Strategy: Egypt’s Vision 2030. Egyptian women’s financial inclusion is also a high priority, and a number of initiatives are being implemented in close coordination with relevant stakeholders.

To institutionalise the process, the CBE established, in November 2016, a Financial Inclusion Department to spearhead and monitor the financial inclusion process, and to foster the coordination and collaboration with the national stakeholders.

These efforts led to substantial improvement in financial inclusion in the past two years, as demonstrated by the 2017 World Bank’s Global Findex Database, which revealed that the proportion of adults with a bank account in Egypt grew to 33% in 2017, from 14% in 2014, and 10% in 2011.

The project will support the CBE’s efforts to establish a comprehensive nationally-owned database to measure the levels and trends of financial inclusion, by conducting a fully-fledged demand and

The CBE has undergone several reform phases n its banking supervision sector over the past decade.

It started by upgrading the supervisory methodology from compliance to a risk-based approach, and it also established new departments such as the regulations and macro-prudential departments.

Moreover, the CBE enhanced its supervisory regime as it has already implemented Basel II and Basel III, according to the timeline plan of the BCBS regulations.

soundness and transparency of the banking sector.

Thus, a macroprudential risk framework that will help the CBE to make the Egyptian financial system more robust.

The launching event of the project brought together over 100 participants from government agencies, business support organisations, embassies and international development organisations.

Ambassador Ivan Surkoš, head of the EU delegation in Egypt, praised the hard work of the CBE in the economic stabilisation process, and underlined the peculiarity of the EU contribution, where inclusion and stability are under a unique programme.

The CBE Deputy Governors Gamal Negm and Lobna Helal highlighted in their opening remarks the recent developments in banking supervision and financial inclusion.

Negm said that the CBE works continuously on further strengthening the capacity of its banking supervision and aligning the banks’ governance with international standards and best practices. He highlighted the CBE’s efforts to establish evidence-based-policy-making through measuring the levels, trends and challenges of financial inclusion in the country.

“We have been able to gather a considerable amount of basic data to prepare the first financial inclusion report which enables the stakeholders to gain more insights on the way forward in this nationally important task,” said CBE Deputy Governor Lobna Helal.

German ambassador to Egypt, Julius Georg Luy, emphasised that Germany has been a long-time supporter of financial inclusion measures in Egypt, and that he was pleased to see that the situation for households and enterprises in accessing financial services has significantly improved, during the implementation organization.

Deutsche Gesellschaft für Internationale Zusammenarbeit (GIZ), represented by the Head of Project Hayder Al Bagdadi, stated that the CBE became a reference point for smart financial inclusion policies in the Arab world and beyond.

The panel discussion focused on the current and future reforms of the CBE.

Representatives from the Banking Supervision and Financial Inclusion departments shared the latest updates and milestones of the respective reform programmes, emphasising the importance of the collaboration with the EU, and of sharing best practices with other countries in the region.

This project is part of the Special Initiative for “Promotion of Access to Financial Services for Small and Medium Enterprises” (PAFSME) in Egypt which is funded by the German Federal Ministry for Economic Cooperation and Development.

The objective of PAFSME is to improve the access to non-bank financial services, such as factoring, leasing, equity finance or insurance for SMEs.

If women have equal opportunities as men, they can add $28tn to the global economy: Vice Chairman of Mastercard