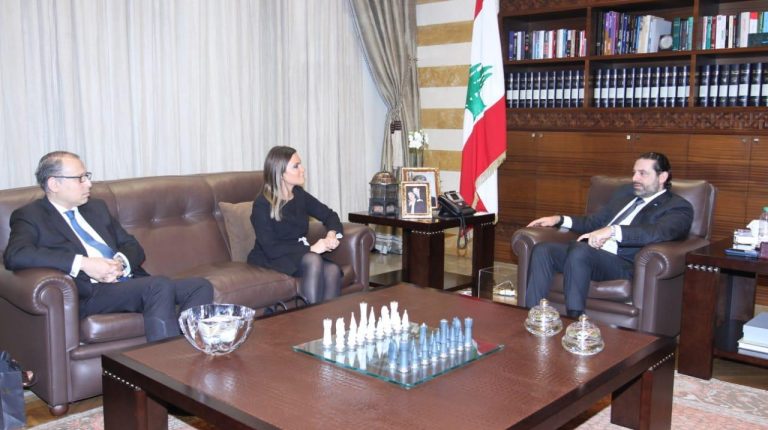 Nasr’s meeting with Al-Hariri was in the presence of Egypt’s ambassador to Lebanon, Nazih El-Nagari, head of the trade representation office at the Egyptian embassy in Lebanon, Mona Wahba, where both sides discussed the outcomes of the 4th Egyptian-Lebanese Business Forum, which kicked off on Friday morning in Beirut, with the participation of about 300 businesspersons from Egypt and Lebanon.

The forum discussed various aspects of investments in both Egypt and Lebanon, to identify investment opportunities and priority sectors of the two countries, opportunities for bilateral cooperation in the service economy and investment in real estate, and the role of banks and financial institutions to support investment, said the statement.

Nasr affirmed Egypt’s keenness to hold the high joint committee meeting as soon as possible following announcement of a new government in Lebanon, adding, “the joint cooperation with Lebanon witnessed positive accomplishments while the next period will witness more accomplishments.”

Nasr affirmed the importance of boosting the bilateral relations on the developmental and economic sides, noting that Egypt’s investment climate is appropriate for Lebanese companies’ new investments.

Nasr added that Lebanon occupies the 22nd position in the list of foreign nationalities investing in Egypt, worth $670m, noting that there are 1,645 Lebanese firms operating the fields of services, industry, construction, oil, tourism and agriculture.

The minister asserted the government’s keenness to share the private sector’s views over the regulatory framework’ adjustments aiming at boosting its role in the Egyptian economy.

For his part, Al-Hariri asserted both countries’ deep relations, expressing his appreciation for Egypt’s regional role under the leadership of president Abdel Fattah Al-Sisi.

Additionally, Nasr met with the Nabil Itani, chairperson and general manager of the Investment Development Authority of Lebanon (IDAL), where both sides discussed preparations for establishing a union gathering all the Arab investment authorities.

The statement noted that the union will initially include the Arab Investment & Export Credit Guarantee Corporation (Dhaman), Dubai FDI, the General Authority for Investment and Free zones in Egypt (GAFI) as well as Lebanese IDAL, stressing that the founders will hold a meeting shortly to discuss approving the investment union.

The statement said that Lebanese firms praised Egypt’s economic programme as well as the regulations’ reforms which gained investors’ confidence, in addition to the measures which were taken to enhance the investment climate, fighting bureaucracy and simplifying investment procedures.

Lebanese firms expressed their interest for injecting new money in to the Egyptian market, noted the statement.

Noteworthy, Head of the trade representation office at the Egyptian Embassy in Lebanon, Mona Wahba, said that Egypt aims to increase the trade exchange between both countries to over $1.5bn during 2019 and 2020.

The trade exchange between Egypt and Lebanon hit about $820m in 2017, as Egypt was the 7th exporting country to Lebanon with values of exports amounting to about $750m.