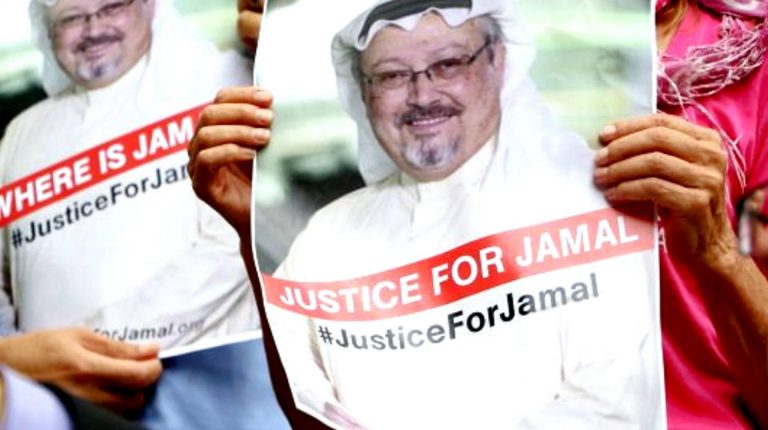 Ahead of Saudi Crown Prince Mohamed Bin Salman’s expected visit to Egypt, some writers picked up once more the Jamal Khashoggi’s murder case, showing their support of Saudi Arabia and praising US President Donald Trump’s position on the issue.

In state-owned Al-Ahram, Ahmed Abdel Tawab said Qatar and Turkey were waiting for this opportunity to lead a campaign against Saudi Arabia, exploiting its weaknesses while they pretend to care about press freedom and human rights.

In the same direction, Morsi Attallah said that the case was used as part of a Qatari-sponsored conspiracy to remove Mohamed bin Salman from power, accompanied by an anti-Trump campaign led by The Washington Post. The evil attempts in the eyes of the writer aimed at stopping Saudi policies against Qatar and the Muslim Brotherhood group, as well as getting rid of the American President under false pretexts of conflict of interest in his relations with the Saudi royal family.

Likewise, Al-Ahram’s Salah Montasser pointed out that Trump found himself in a dilemma between his country’s principles and interest in the Khashoggi case, referring to his latest statement “America first,” and saying that putting the country’s interests first is a lesson that other states should learn.

In the privately-owned Al-Youm Al-Sabea, Dandarawy Al-Hawary compared Turkey to a bastard who can only act immorally to achieve his interests at the expenses of other people. To him, this is why Turkey rejoiced putting its hands on the Khashoggi case, to destroy the reformist and ambitious Bin Salman. He also said that The Washington Post has adopted the Turkish views and Qatari campaign against Saudi Arabia.

State-owned Al-Akhbar’s Osama Aggag said that Saudi Arabia was working in favour of the people of Yemen by standing up to Iranian-backed militias in the country. It also acted out of necessity, he argued, given geographical threats. As so, Aggag said he was pessimistic about political negotiations’ ability to end the war, noting it actually helped the Houthis to take over the true power in Yemen.