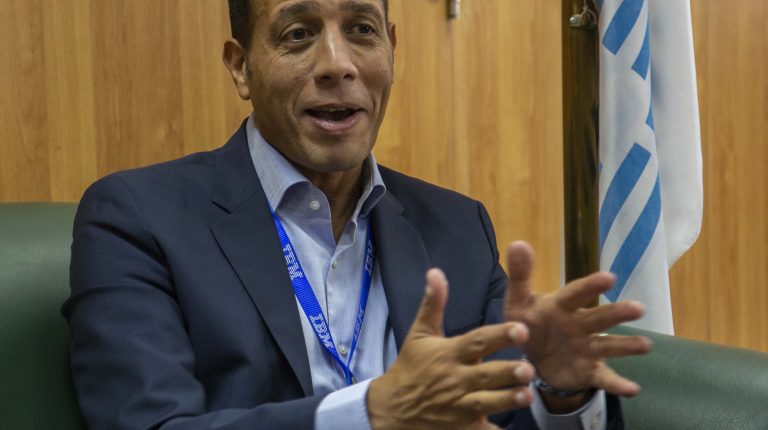 Wael Abdoush, the general manager of IBM Egypt, expressed his optimism about the economic reforms in Egypt, and the opportunities it can create for companies, citing that as the main reason behind their continuous investment and progress in the local market.

He noted that IBM services go beyond Egypt, as it exports technological solutions through its six major centres to the US, Europe, the Middle East, and Africa, adding that they are ready to offer Blockchain technology in the local market.

IBM has been operating in the local market since 1954 with several bodies, Abdoush said, explaining that the government sector is essential for the company, including banks and telecommunication, besides the private sector.

“Our strategy focuses on contributing to developing IT in banking and telecommunication sectors to help those working in these sectors improve work at higher speed and control,” he added.

IBM seeks to develop its technological solutions in the coming period to meet the needs of customers in line with the government’s economic development plan, he elaborated.

The company supports the government’s 2030 plan of digital transformation, Abdoush went on to explain, stressing that the government has been taking serious steps in this respect for a long time, noting that his company is working within its framework.

Abdoush expected the financial sector and different services offered to citizens will see major digital transformation in the coming period. However, the IT sector will face a major challenge in building the skills and expertise required for digital transformation. This is why IBM, according to Abdoush, gives special attention for continuous training of graduates as well its employees.

IBM offers an online training platform called IBM Digital Nation Africa. It provides the required skills and training to deal with the latest technologies, such as AI, blockchain, Internet of Things (IoT), and data analytics.

He explained that infrastructure in Egypt has witnessed recently major investments, with more yet to come in the coming period.

“Our business is not limited to the local market but is also exported. We export from Egypt technological solutions through six major centres, which offer their services in developing software, technical support, programming, computers, and outsourcing. The US, Europe, the Middle East, and Africa benefit from these centres,” he said.

He explained that the Digital Sales Centre serves the Middle East and Africa from Egypt. The main mission focus is to spread the digital transformation and lead more of our clients on the path to becoming Cloud and Cognitive digital businesses. To facilitate  mission execution, the center houses an end to end team responsible to ensure that the sales & marketing funnel is efficiently producing volume business across the Enterprise and Commercial segments across Middle East & Africa with strong emphasis on commercial, small & medium business clients.

The company works with many entities for the development of existing projects, including the Administrative Capital and other projects, and provides IT programmes, tools, solutions, and services to the entire world. “We are, of course, one of the major companies specialised in cloud computing, AI, and blockchain,” He pointed out.

Regarding IBM’s possible offering of Blockchain solutions in the local market as is the case in the UAE, Abdoush said the entire world talks about this technology, so it is natural that it receives attention in Egypt. There are many bodies which can benefit from these solutions and applications, and several generations can use the Blockchain technology. He explained that IBM is a global leader in Blockchain, as we believe this technology will revolutionize business like the Internet did in the 1990s; and there are several authorities in Egypt that have already taken steps towards relying on this technology in their work.

He pointed out that the technology itself is available and ready to be offered, noting that the Egyptian market is still accommodating the idea and the regions that could benefit from it. Regarding the possibilities of the ministry of finance using that technology, Abdoush said that the applications are convenient for the financial field in general.

Answering a question on data protection, Abdoush said: “IBM is one of the largest companies in the world that pays attention to confidentiality of information, the technology of securing information and its solutions,” he added, noting that his company is continuously investing in data security.

Regarding the laws that he believes must see the light in the local market, he stressed that the local market needs to develop the existing legislations and laws in order for them to keep up with the continuous technological developments rather than create new laws.

As for the company’s vision of the Egyptian economy, he explained that the economic development conducted in Egypt is perfect and was necessary, noting that the government is interested in managing the reform and that it is aware it is a continuous process, noting that the results of that are starting to become clear, and that more time will be needed to see all of the rest of the results.

Apple, the stock market and a trillion dollars