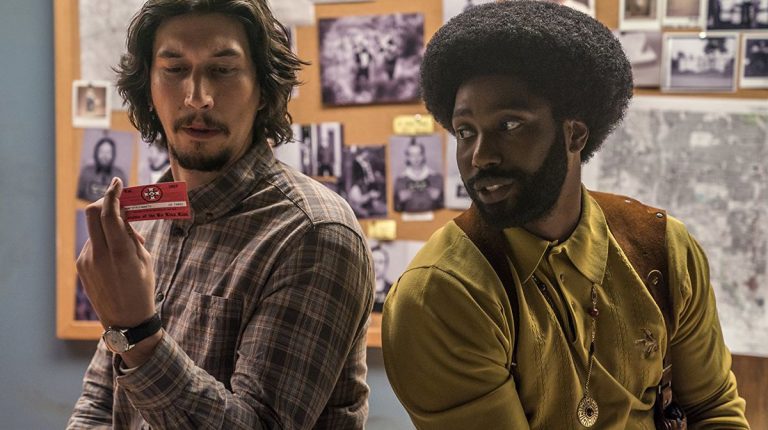 Spike Lee’s 1970s-set film Blackkkansman is both an optimistic and defeatist approach to racism in modern America which follows the outrageous true story of Ron Stallworth (John David Washington) who was the first African-American detective to serve in the Colorado Springs Police Department. A rookie in the force, he creates a mission for himself: infiltrating the Ku Klux Klan(KKK). He later uses his colleague Flip Zimmerman (Adam Driver) to become an undercover agent. Stallworth smoothes the Klan on the phone, while on the field Zimmerman interacts with the radicals.

We see and hear the violent and racist rhetoric of the Klan. The film, arguably Lee’s finest production since Inside Man (2006), develops as a police thriller, where an agent reaches a high level of intimacy with the infiltrated group and actually proves their violent intentions, against African Americans, Jews, women, and communists.

Comedy is present in the film especially in the interactions of the cops and the KKK, which is a product of the excellent acting performance.

The film switches brilliantly between comedy and depressing drama. Lee not only criticises racism and racists but also mocks them in a manner that is done while giving them agency, so as to increase the credibility of the plot.

Actors playing the low ranking footsoldiers of the KKK, Jasper Pääkkönen and Ryan Eggold, did an amazing job in making the characters believable, and breaking away from the redneck usual stereotype.

An easy negative critique which has been directed towards Lee is that he “went mainstream”. Nevertheless, the film is very relevant to the political and social context that the world is witnessing.

However, Spike Lee wanted to argue that in law enforcement is part of the system, and that on the surface it advocates against racism, but deep-down it turns a blind eye and refuses to act. This argument can be made as one follows world news. In an American context, Lee uses the Charlottesville car attack in Agust 2017, where a car crashed into a crowd of people who had been peacefully protesting the Unite the Right. The perpetrator was a neo-Nazi with white supremacist beliefs.

During the press conference which followed the world premiere of his film Blackkkansman at this year’s Cannes Film Festival, the American director said the expansion of the right-wing radical practices is not only confined the US but is also spreading all over the world.

Italian Marxist philosopher and communist politician Antonio Francesco Gramsci once said “I’m a pessimist because of intelligence, but an optimist because of will.” In Blackkkansman, Lee is optimistic of what public action can do against right wing and rascsim but is pessimistic about officials and statesman’s reaction.