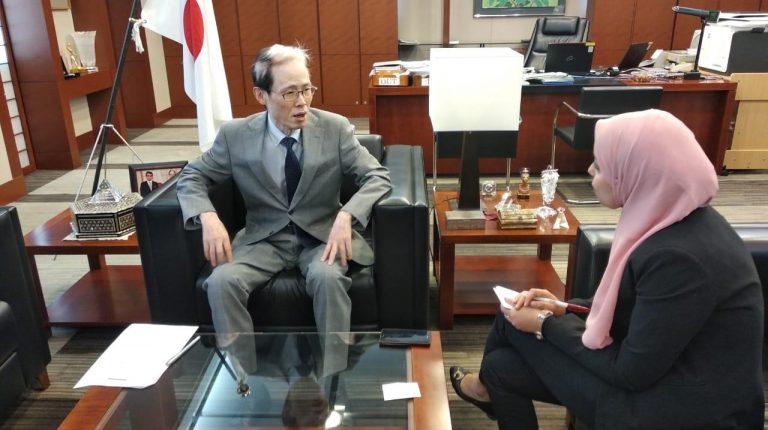 Masaki Noke, Japanese ambassador to Egypt said that a high-level mission is expected to visit Egypt early 2019, adding, “Japan External Trade Organisation (JETRO) has an idea to send a mission to Egypt early next year, including representatives from the major Japanese companies as well as JETRO officials.”

On the occasion of the Japanese embassy in Egypt celebrating the National Day today, Daily News Egypt interviewed Noke, to shed light on the diversified aspects of cooperation with Egypt including trade, investments, economy, tourism and culture, the transcript of which below, lightly edited for clarity:

Initially, would you give us a briefing about your past experiences before coming to Egypt in September?

I arrived at Cairo in September so only two months have passed, however, I have a very positive impression of this country and the Egyptians.

Since September, what are the meetings you have attended with Egyptian officials?

On the 22 of October, I presented my letter of credentials to President Abdel Fattah Al-Sisi, then I had a number of meetings with government officials and with Prime Minister Mostafa Madbouly.

One of my immediate jobs after my arrival was to accompany Egypt’s Foreign Minister Sameh Shoukry for a visit to Japan from 4 to 6 of October, so I attended all the key meetings he had there with the Japanese Prime Minister, vice prime minister as well as finance minister.

Shoukry came to Japan to participate in the Tokyo International Conference on African Development (TICAD) ministerial meetings, and also paid Japan a bilateral visit. Shoukry had very good and strategic dialogue with our foreign minister.

Shoukry headed to Tokyo on 4 October on a bilateral visit to discuss joint cooperation and regional issues of common interest and to take part in the ministerial meeting of the TICAD, scheduled on October 6-7 in order to promote cooperation between Japan and Africa, and to support the continent’s comprehensive development efforts, according to a past ministerial statement in October.

What about your meetings with other Egyptian Ministers?

The antiquities subject is very important, so I met with the Minister of Antiquities Khaled El-Anani three times. I also had many other meetings with senior government officials. I participated in a very big seminar on Japanese history held at Cairo University where I met with experts on Japanese language not only from Egypt but also from Arab countries.

As for the future meetings, we are still in the process to meet ministers I have not met yet, so there will be many meetings.

Additionally, I have already visited some of the Japanese companies operating in Egypt and the Suez Canal zone. One important meeting I held was with Imam of Al-Azahr Ahmed Al-Tayeb, and this meeting was very impressive for me.

During your recent meetings with the Japanese companies’ representatives, How they assess the Egyptian investment climate?

Generally, Japanese companies are very positive about their investments in Egypt, as there is huge potential in the Egyptian market. There is a growing population of about100 million citizens. Egypt’s macroeconomic figures are improving so there is very good and positive general trend.

At the same time, the companies’ expansions and new companies’ investments depend on their own researches and studies. However, some companies face challenges like bureaucratic procedures, tax measures, trade policy and so on. What I do now is to exchange views with Japanese companies. We ask Minister of Finance Mohamed Moeit to pay attention to the customs issues and facilitate our investment and activities.

What was the response of the finance minister on the issues that face some of the Japanese businesses?

He was very keen on helping the companies to solve the issues. The Egyptian government is listening carefully to Japanese companies and government voices, and this is an ongoing process. I look forward to additional decisions that take our concerns into consideration.

How do you assess the political and economic cooperation between both countries?

Actually, our joint relations are excellent, and we have been enjoying positive and historical relations. Exchanging high-level visits was a boost towards our relationship as in 2015 Prime Minister Ape visited Egypt and President Al-Sisi came to Japan in 2016, which was the first presidential visit in 17 years.

Additionally, we have a very good record of economic cooperation, including joint cooperation in the opera house establishment, and the Suez Canal bridges. we are now working on two significant projects which are the introduction of the Japanese Education System and the Grand Egyptian Museum (GEM ) where the Japanese and Egyptians are working seriously.

As a trade partner, Egypt is already a good export destination, but the amount of trade exchange is still modest, roughly 100bn Japanese yen which is less than $1bn.

What about the trade and business missions between Egypt and Japan in 2019?

There is an idea from the JETRO to send a mission to Egypt early next year, including representatives from major Japanese companies as well as JETRO officials.

There is a framework of joint economic committees between Japan and Egypt, so on the occasion of the JETRO mission, the Japanese chamber of commerce is expected to organise a meeting for the Egypt-Japan economic committee.

How many Japanese companies are expected to participate in the coming mission?

It is still in the early stage, so I have no idea, but it is not about the number. There are major companies like Toyota, Tsusho, and other trading companies and manufacturing companies are usual members. Major car automakers are included as well as light industries and banking sectors. So, it will be a cross sector visit.

What about the future official visits between both countries?

About the official visits between both countries in the future, just until yesterday, high-level officials visit Egypt including the senior vice minister for environment, who participated in the Biodiversity Conference in Sharm El-Sheikh.

I don’t have a concrete calendar of the future visits. However, I expect that 2019 will witness many visits between both countries as Egypt is going to take the presidency of the African Union (AU) next year and Japan will host the at the end of August, that’s why both countries have to consult and cooperate a lot.

For the GEM, would you please elaborate about the project’s updates?

Actually, I visited the GEM three times since my arrival in September, and I witnessed the seriousness of the work which is being conducted on there. Our current target is to fully open it in 2020, so we have to work on the constructions of the facilities, preparation for management, the services and software.

About Metro line 4, there were some rumours that there are some issues?

The National Tunnel Authority is under consultations with the Japanese side on some technical discussions. I hope the project will be launched as early as possible and I do not care about the rumours.

Does the Egyptian government discuss with you any new development projects?

There are lots of developmental projects going on and under discussion. Infrastructure is key that is why we finance the Borg El-Arab International Airport Project. We are now implementing the project’s expansions and introducing top level environmental technology in solar energy.

Would you please elaborate more about the cooperation in improving Egypt’s educational system?

Now we are working on enlarging EJUST to develop the undergraduate’s faculty level, not only in science and technology but also in the business management and human sciences areas.

More recently, with a direct initiative of President Al-Sisi, we launched the Egypt-Japan school system to introduce the Japanese educational system in primary and secondary education in Egypt. Last year, we began with 12 pilot schools and from this year we began with the 35 new schools.

We think that there are two characteristics which distinguish us from Egyptian and the European school systems. The first is the students’ intellectual development, as we put emphasis not only on the student’s memorising of data, but we also encourage developing students’ way of thinking and finding solutions by themselves to some questions. The second characteristic is developing the mental and physical capacity of the students.

In many countries, schools are required to develop the students intellectually, but they don’t emphasise developing the mind and body. It is usually the role of the family and community and not of the schools, as it is in Japan.

In Japan, it is important for schools and educational authorities to develop the mind and body and intelligence over Tokktsu or special activities, which encourage students to think together.

When I visited a pilot school in Cairo which introduces Tokktsu system, I saw the children myself, they were discussing a way to find a slogan for the classroom on three stages, the first was the classroom’s chairperson asking his classmates for ideas and proposals, the second was classifying the ideas in too many segments as unity and power of the class and the beauty of the class which means to keep the class good condition, while the last stage is to have a decision through voting.

It was very interesting to see the children encouraged to work together and boosting their human relations.

To have those kinds of activities in Egypt, you should have an appropriate size of the classroom, and numbers of the students have to be less than 40 for example.

Education is the foundation of the society, and we have our example so we can share it with Egypt, but it is totally on the Egyptian side to choose what you pick up and what is appropriate for implementing here.

Additionally, we pay great attention to communication and training for Egyptian teachers, and we send Japanese trainers here and we also invited some Egyptians to learn about our education system in Japan.

However, some people get cultural shocks when they see children have to clean their classes, but it is very important for us to clean the class. when I was child, I used to clean the class with my classmates together and the teacher told me “cleaning the class purifies your hearts”.

Egyptians also keep the mosques clean and when they pray, they clean their hands and body first, so we have kind of similar concept. Some might think that the Japanese are using the children as a labour force which is a misunderstanding.

Are there any new negotiations for further assistance for education?

We have already agreed on an education sector loan worth about $150m, and we will continue consultation on the items where we disburse the loan.

Apart from business, what are the cultural programme plans?

This year we are celebrating the 30th anniversary of the Cairo Opera House which was established with Japanese assistance in 1988, so from 4 to 7 December, we will be having the Opera Aida performance in participation with a Japanese soprano singer, playing the title role.

Next June a top-level violinist will come play with the Cairo Symphony Orchestra, and we will also be showing some important documentary movies.

Bundesliga sides have reasons to be cheerful after European exploits