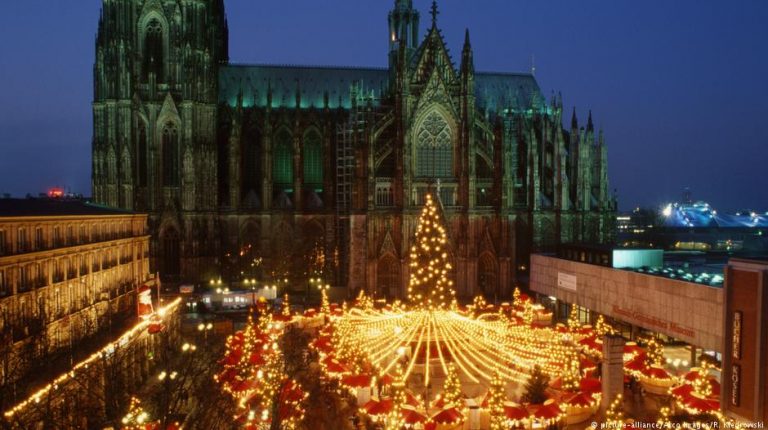 Winter marks the start of a magical time of Christmas markets in Germany. The festive bazaars attract millions of people, including DW’s Eesha Kheny who visited Cologne for her very first Christmas market experience.Moving to Germany from India, I anticipated that I would hate the harsh winter weather which would be a complete contrast to what I was used to from the tropics. What I couldn't have predicted however was how much I would fall in love with wintertime in Germany. The love affair started on a fateful November day as I stood in the middle of a Christmas market in Cologne.

Wearing my warm boots, woolen gloves and thick scarf, I was all set to dive into the wonderful thrills a Christmas market has to offer. Christmas is not a festival celebrated by Hindus, but since some of my closest friends are Christians, I grew up singing carols and taking part in the traditions. Christmas in India is a simple affair with small parties, a few shops in the market selling ornaments, bakeries preparing lots of rich plum or traditional fruit cake. The highlight is always the midnight mass at church on the eve of Christmas. By comparison, these elaborate German markets add a whole new dimension to Christmas.

Despite the rain, the place was festive. I joined the small groups of happy people, idly strolling through the narrow lanes. I passed rows and rows of red-roofed huts, awestruck at the scene unfolding before me. Together, these 150 decorated huts – topped with golden stars – create a Christmas village, at the big festive central market next to Cologne Cathedral. During my visit the mood was light and the vibe was merry, everyone seemed to be able to sense Christmas approaching. It was not hard to imagine that centuries ago, these winter markets began as a chance for residents to meet, trade goods and prepare for the cold months to come.

The markets date back to the late middle ages in Germany when regular farmers markets were extended during the Christmas season. Over time the popularity of this German tradition grew and other countries began to organize their version of them as well. Nevertheless, each year millions of people visit the hundreds of markets which are set up in Germany. The world-famous 'Christkindlmarkt' (which translated literally means Christ Child Market) in Nuremberg has a grand opening by the Christkind – these days portrayed by a young girl dressed in white with a gold crown and gold-winged sleeves signifying an angel – reciting a speech from the balcony of the Frauenkirche church. The other beloved old market is the Dresden Striezelmarkt which dates back to 1434. Its highlights include a 14 meter (46 ft.) tall Christmas Pyramid, an elaborate puppet show and delicately crafted figurines from the Ore Mountains. The one I went to, the main Christmas market in Cologne also features highly on the must-visit list. With its iconic setting in the shadow of Cologne Cathedral, the market expects 4 million visitors to flock here this year.

Countless strings of lightbulbs create a fairy lit canopy, through which I could see the gothic cathedral looming overhead. Also towering over the twinkling lights, and lit with 50,000 LED lights, stands a gigantic Christmas tree – a Nordmann fir-, which at a height of 25 meters is known to be the tallest in the Rhineland. The tree definitely forms the heart of the market. Underneath this canopy, a band was setting up on the center stage, ready to showcase its talents before an enthusiastic crowd. The 20th century has brought change to the markets turning them into entertainment events as opposed to merely a jolly place to meet friends. I guess these musical performances also motivate people to visit the markets, to listen to choir concerts and traditional songs and get into the Christmas spirit.

The warming embrace of Glühwein

The biggest revelation of the season for me was how absolutely delicious Glühwein, or mulled wine as it's commonly known in the English-speaking world, is. In India, I would usually drink a glass of red wine with a Christmas meal which compared to Glühwein now seems fairly ordinary. This warm elixir of herb and orange infused red wine is the perfect remedy for the dropping mercury levels. Glühwein is a traditional warm drink available at all Christmas markets throughout Europe. But Germany and Austria are particularly well-known for it. I was fascinated to learn that most markets have their own customized mugs which are made out of either ceramic or clay. They also come in different shapes such as goblets, cups or even boots. Most mugs have unique artwork which also includes the name of the city and year. As I paid the 2 euro (2.26 $ US) deposit – or Pfand as it's known in German – in addition to the cost of my drink, it suddenly struck me that these glasses would make the perfect souvenir. As a result I quickly acquired two mugs on just my first day at the market. I began to imagine starting my own collection of German Christmas market mugs but then calculating the potential cost quickly curbed my enthusiasm. After all, good things all come at a price and that amount of Glühwein would definitely not be cheap.

Oh, and the endless food!

Ambling with my mulled wine mug in hand, gently swaying to Christmas carols with a big smile on my face for me quickly became the definition of a perfect winter's day. But pleasure at Christmas markets knows no bounds. They are an adventure for the taste buds too, with the best of traditional German food and desserts on offer. As I ventured deeper into the market the fragrance of freshly baked goods filled the air, with a slight hint of cinnamon adding to that festive feeling. Munching on a packet of warm roasted chestnuts, I made my way from one end of the market to another, trying to decide what I would like to eat next. The choices I faced were definitely very different from back home in India where a buffet spread would include types of salads, curries, rice, croquettes and other meat entrées. By the end of my day at a German market I had already managed to compile a list of my favorites: Potato fries (known here as Pommes), crepes and 'Dampfnudel'. Although this would literally translate into steamed noodle, it is actually a white sweet roll served with warm vanilla sauce and fruit compote. But, for me, what really stole the show were the mushrooms in garlic sauce (Champignons mit Knoblausoße) prepared right in front of me in a large skillet. Such a feast for the eyes! And there was also crispy baguette to accompany it. Who knew Christmas markets in Germany could be such a delight for a vegetarian? Definitely not this Indian girl!

As I struck up a conversation with those people gathered around the food stall I quickly understood that I'm was not the only one won over by the delights of the Christmas markets. Vanessa Lage, a Brazilian woman who has been living in Germany for two years told me: "I'm a big, big fan of the Christmas markets – each year I try my best to come here as often as I can." She described how much she enjoys what she called the special Christmas mood that people seems to be in here, despite the cold. She added: "I really love it and I recommend it to everyone – if you are here at this time of the year you have to go to a Christmas market and enjoy this amazing experience!"

Goodies made in Germany

Germany is known around the world for its craftsmanship and this is really visible at Christmas markets. Art, craft and handmade products are a big hit here. The festively decorated market huts – Buden, as they are called in German – tastefully display the goods, enticing visitors to stop by. I was amazed by the intricate details on the wooden toys and Christmas ornaments. Locally produced in Germany by highly skilled craftspeople, these beautiful objects can also be shockingly highly priced. And yet, they are highly popular!

I navigated my way through the make-shift shop huts, filled with children and parents, equally squealing with delight at the sight of all the toys. Careful not to knock anything over, I visited a few huts, window shopping so to speak, until I found what I really wanted. Glass balls shone, cuckoo clocks chimed and the lanterns gleamed. Here you could find everything. But everyone's favorites (including mine) are the legendary nutcracker dolls. Resembling a toy soldier, these dolls, which are symbols of good luck, originated in the 17th century in the Ore Mountain region of eastern Germany. After some searching, I bought myself a small nutcracker doll along with a very typical German gingerbread heart. As I headed to a brightly lit hut for (yet!) another glass of Glühwein, I realized winters in Germany were not so bad after all! With all the Christmas markets now open, I am very much looking forward to a few beautiful weeks ahead.