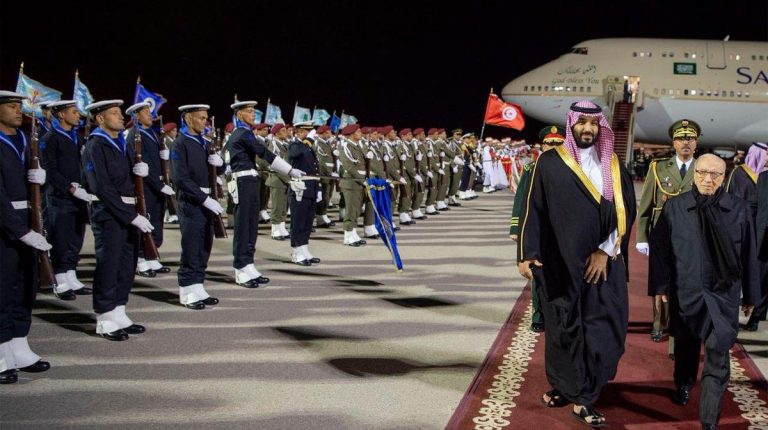 Saudi Crown Prince Mohammad Bin Salman has visited Tunisia for a brief visit despite protests and calls for cancellation over the murder of Washington Post columnist and Jamal Khashoggi at the kingdom’s consulate in Istanbul last month.

Bin Salman landed in Tunisia late on Tuesday arriving from Egypt. He was received by Tunisian President Beji Caid Essebsi, the country’s prime minister and other top country officials.

According to the Saudi owned website and television Al Arabiya, both leaders addressed enhancing bilateral relations as well as other issues of common interest.

Meanwhile, the Tunisian presidency released a statement about the visit and said that both discussed “enhancing cooperation in various fields including investment, economic, funding, military and security cooperation in order to counter terrorism and extremism.”

However, another reception was waiting for the Saudi Crown Prince in the streets as hundreds of protesters gathered in the capital Tunisia to express their rejection of the kingdom’s de facto ruler’s visit to their country. Demonstrators raised large posters with similar words written on them such as “Mohammad Bin Salman is not welcomed in Tunisia.”

Since the schedule of Bin Salman’s visit was announced, Tunisian activists and journalists strongly rejected his call. Reports of cancellation circulated on Monday, as the Egyptian presidency announced he would stay in Cairo for two days, on Monday and Tuesday.

In an open letter to Essebsi, the Tunisian Press Syndicate and another 12 NGOs expressed their disapproval to the Saudi Crown Prince’s visit.

Tunisia is the fourth stop in Bin Salman’s foreign tour. He visited the UAE, Bahrain, and Egypt where he was warmly welcomed. He is scheduled to head to Argentina to attend the Group of Twenty G20 summit, where he will likely meet with US President Donald Trump, and Turkish President Recep Tayyip Erdogan.