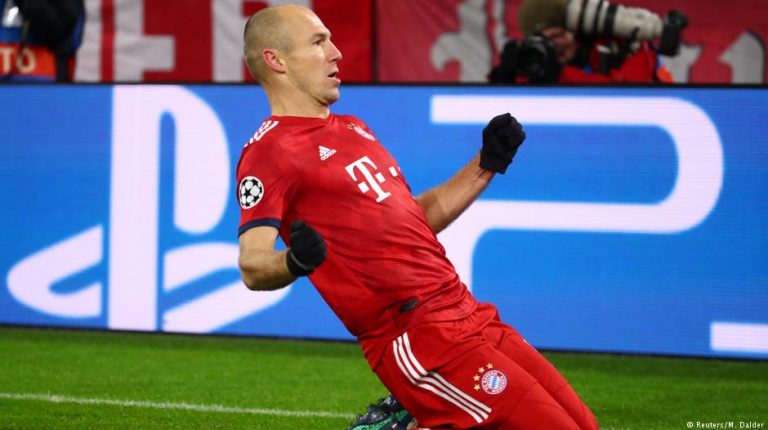 Two goals each from Arjen Robben and Robert Lewandowski and a late Franck Ribery strike secured Bayern a much-needed win. Their 5-1 victory over Benfica ensures the German side are in the knockout stages once again.Bayern Munich 5-1 Benfica
(Robben 13', 30', Lewandowski 36', 51', Ribery 76' – Gedson 46')

In the midst of a most unusual time, Niko Kovac was able to take comfort in the familiar on Tuesday, as Bayern brushed aside their Portuguese opponents without needing to break a significant sweat.

Over the last decade, there have been few more reassuring and pleasing sights for Bayern fans than Arjen Robben cutting inside on to his left foot. They saw it twice in the opening half hour with predictable results – something in short supply in Bavaria of late.

The veteran Dutch winger got a touch fortunate for the first, bundling his way through before curling it high over the excellent Odisseas Vlachodimos, before repeating the trick 17 minutes later, this time with a front-post finish.

The third also felt like the good old days of September, as Robert Lewandowski rose highest to nod a Joshua Kimmich corner in off the post.

A smartly taken goal from promising youngster Gedson Fernandes 30 seconds after his introduction as a half-time substitute looked, briefly, to have got Bayern's nerves jangling again but Lewandowski took a leaf out of Robben’s book to score his second in exactly the same fashion as his first. Another Kimmich corner, another Lewandowski header and another year in the Champions League knockout rounds for Bayern.

Franck Ribery’s first Champions League goal for more than three years wrapped things up late on. But as convincing a display as this was, it’s won’t calm the storm around Kovac and Bayern for long. For now though, any win will do and a draw or better in Amsterdam in the final group-stage game will ensure the German champions go through to the last 16 as group winners.

FULL TIME: That's the end of that. Thoroughly convincing from Bayern against a pretty poor Benfica outfit. We'll have a match report here any minute.

90+1' – BIG news from Sinshiem, where Taison has just scored in injury time to give Shakhtar Donetsk the lead over Hoffenheim. 2-3 there.

90' – There'll be two minutes of injury time. Which feels like plenty.

88' – Boateng plays a peach of a ball to Alaba down the left but his cross is not so impressive and is easily cut out.

78' – He's done it, Ribery has a first Champions League goal since 2015. He played in Alaba and followed his run on to sweep home the cutback. The Frenchman is then immediately replaced by Sandro Wagner. But the monkey is off his back.

76' – Benfica make a sub now – Semedo on for Fejsa. Will Kovac give one of his youngsters a run now? He surely should.

72' – There will be no hat-trick for Robben tonight as Sanches comes on against his old club.

70' – Goretzka tries his luck from distance but Vlachodimos beats it away. Robben is first to the rebound but he's offside.

69' – Ribery has a couplle of stabs at jinking in to the box from the left but can't quite sort his feet out.

67' – An update from group F, where Hoffenheim are drawing 2-2 with Shaktar Donetsk and Manchester City and Lyon are locked at 1-1. As it stands, the German side are going out and the latter two teams are through. A way to go yet though.

63' – Alaba gets to the byline and whips one in for Müller to attack at the front post. The keeper is brave and gets there first and Müller's foot is too high anyway. Vlachodimos has kept this from being more embarrassing so far.

59' – They've worked it out now and Seferovic comes on for Jonas. The former Bundesliga man has been in red hot form for Switzerland of late.

57' – The fourth official and various other gentleman cannot wor out what's wrong with the electronic substitutions board and Benfica want to make a sub.

55' – Jonas gets off a decent snapshot from the edge of the box but Neuer gets down to make a comfortable save.

52' – A carbon copy of his first. Lewandowski again leaps highest and again plants in a header from Kimmich's corner. That'll settle any nerves.

50' – Ribery dances through three or four players but hits his finish too close to the keeper. The wait goes on for the Frenchman.

48' – Never mind expected, big things have happened. Gedson, 19, strode on to the pitch, played a one-two and stroked past Neuer just 30 seconds after coming on to the pitch. Surely Bayern can't blow this one. Surely.

46' – We're off again. Benfica have introduced Gedson Fernandes, of whom big things are expected, for Pizzi. Bayern are unchanged.

HALF TIME: That's the first period done. Two Robben specials from the Dutchman and a Lewandowski header from a corner and this is done. But confidence is key for Bayern here and a hammering might just help with that.

42' – Bayern looking a bit Bayernish now, strking it round, looking dangerous and even showing a bit of confidence.

38' – Vlachodimos will be furious here. He made a brilliant save from Müller's flicked header and then saw Lewandowski nod in a Kimmich corner almost unchallenged. The Polish striker took it well but he didn't have to do a lot.

36' – Are Bayern playing well or are Benfica just really bad? A bit of both for me. The visitors now need four. I'll stick my neck out and say that they ain't getting them.

34 – Ribery joins Robben in the book after catching a Benfica man in the shoulder with a raised foot. That was very high – probably not malicious but certainly dangerous.

32' – Another proper Robben of a goal. Müller lifted it beind the full back, Lewandowski dragged defenders out and Robben cut inside and lashed in with his left – this time pulling it in to the near post.

28' – Benfica break for about the first time. Jonas plays in Pizzi, who has got away from Alaba. But the Austrian gets back to block the cross and Conti heads over from the corner. A reminder that the Portuguese outfit now need three goals to keep their Champions League hopes alive.

26' – The Dutchman is involved again straight away, capitalizing on a dreadful error. But his shot is blocked.

23' – Neuer comes charging out of his box to pip Jonas to a long ball forward then, moments later, his opposite number Vlachodimos, does superbly to tip a Lewandowski curler over the bar. That looked in all the way, brilliant save.

19' – Ribery nearly gets that long-awaited European goal by taking a leaf out of Robben's book. The French winger drove in from the left but hit his right-footed curler straight at the keeper.

16' – That's Robben's first Champions League goal since March 2017, his partner in crime has had to wait even longer.

14' – He tried that shot on his right (see 3') now Robben goes back to old familiar. The veteran cut in from the right, rode a couple of challenges, perhaps getting a little fortunate on the way, and then buried the trademark left-foot curler.

8' – Rafinha has a little nibble at Cervi in the middle of the park but escapes without a booking.

5' – Kimmich swings in a dipping freekick from the left that's just about cleared by the hosts. Bayern in the ascendancy early on.

3' – Lewandowski barges through the middle of the pitch and strokes it out to Robben. The old dog tries to learn new tricks and strikes with his right foot. But it goes out for a throw in. Maybe stick to the cut-inside Arjen?

20:55 – So Kovac continues to keep faith with the old guard: Müller, Neuer, Robben and Ribery all start despite displaying varying levels of poor form. It could be argued that he had little choice, given the injuries, but it could also be argued that the club's youngsters deserve a go given the paucity of recent performances. Ulreich might also feel aggrieved given Neuer’s struggles.

It looks like he’s following Joachim Löw’s lead by using Joshua Kimmich in midfield, with Rafinha in at right back. We’ll see how that one pans out.

20:50 – The final whistle has just blown in the other game in Group E, where Ajax beat ten man AEK Athens 2-0 to book their spot in the knockout stages for the first time in over a decade. That means that the matchday 6 clash between Ajax and Bayern will determine the winners of the group, only a win by two or more goals tonight will keep Benfica’s hopes alive and AEK will be bottom.

20:45 – Hello, and welcome to matchday 5 of the Champions League, where Bayern Munich can book early passage to the knockouts.

Last time these two sides met, on matchday 1, Bayern brushed Benfica aside to give Niko Kovac a sixth win in a row as Renato Sanches produced a performance to remember at his old stomping ground. September seems a long time ago now, with some suggesting Kovac could go this week, having taking just nine points from the last 24 in the Bundesliga and with Bayern sitting in fifth.

Injuries have been added to insult, with Kovac missing a number of senior men tonight, Mats Hummels and Serge Gnabry the latest to go down with a stomach bug and adductor injury respectively. Sanches is one of only three senior outfield players named as substitutes tonight. Meritan Shabani, Woo-Yeong Jeong and Jonathan Meier are the homegrown youngsters on the bench. Here's how the sides line up.