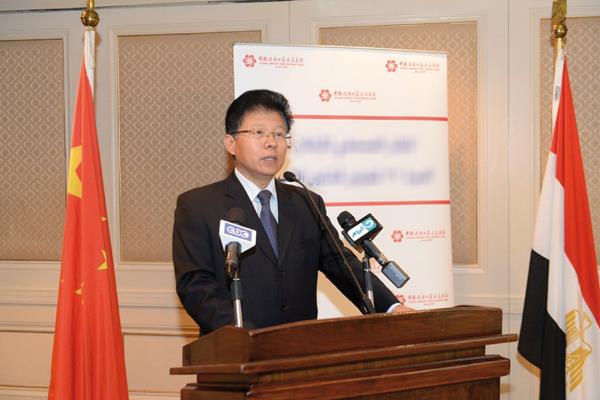 The Chinese trade ministry revealed that the value of construction projects implemented by Chinese companies in Egypt reached $7.59bn during the period from January to September this year marking an increase of 772% compared to the same period last year.

It came during a press conference on Tuesday for Han Bing, minister counselor for economic affairs at the Chinese Embassy in Egypt, to speak about the Chinese – Egyptian economic cooperation. The trade ministry’s statistics said that the Chinese direct investments in Egypt increased by 68% in the first nine months of the 2018, reaching $45m, said Han, noting “the investments increase is mainly from Jushi, New Hope Group, Tianjin Economic and Technological Development Area ( TEDA), Hengtone, XD-EGEMAC.”

“Many Chinese companies are interested to enter the Egyptian market. We are investing in energy, transportation,

and infrastructure. However, there are some challenges relating to registration, customs duties, taxes, and visas for Chinese employees,” Han stated, stressing that the Egyptian government is paying great attention for enhancing the investment climate.

The Egyptian Chinese trade exchange increased by 29.3% over the first nine months of 2018, reaching $10bn, compared to the same period of 2017, he said, adding that Chinese imports to Egypt reached $8.7bn from January to September of 2018 while Egypt’s exports to China recorded $1.3bn.

“Since the beginning of the year, the bilateral financial cooperation has been doing great, as the China Development Bank (CDB) signed two new contracts, the first worth $600m was with the National Bank of Egypt (NBE), and the other was with the African Export–Import Bank,” said Han.

He added that a number of Chinese financial institutions signed $7bn worth contracts with Egyptian counterparts this year, noting that Chinese loans in Yuan to the Central Bank of Egypt (CBE) have been positively developed after the 2016 currency swap agreement.

Expanding in using the Chinese Yuan in Egypt will positively affect the numbers of Chinese visitors to Egypt, as the Egyptian ministry of tourism expects about 500,000 Chinese tourists this year, compared to 300,000 tourists in 2017, Han said. “We hope to achieve this number.”

On the other hand, the Chinese – African cooperation is expected to increase next year after Egypt was elected to chair the African Union (AU) which coincides with China’s economic development plans in the continent.

Han affirmed the importance of his country’s two major events in 2018 that will positively impact the economic ties with other countries. The first event was the Forum on China-Africa Cooperation (FOCAC) in September which was attended by President Abdel Fattah Al-Sisi.

Following the FOCAC, Egypt and China signed an agreement to develop the infrastructure of the second phase of the Central Business District (CBD) at the New Administrative Capital with investment of $3.5bn. They also contracted to establish a project in the petrochemical sector in the Suez Canal Economic Zone with investment of $6.1bn, according to previous media reports.

Al-Sisi’s last visit to China also witnessed the signing of contracts for the construction of a water storage station in Gabal Ataka with investments of $2.7bn and a coal power plant in Al-Hamrawin.

The second Chinese event was the country’s first international import expo which was attended by Egypt’s PM Mostafa Madbouli, heading an Egyptian delegation, in the expo while Egypt was a guest of honor.

“We would like to focus our cooperation with Africa on eight major initiatives which was announced in September,” to help African countries to build their own development, he elaborated.

Industrial development, infrastructure, capacity building, and health are the main focus of China in the future, which come in line with the 2063 agenda.

China plans for launching an African economic trade expo to provide an appropriate opportunity for several enterprises to meet and share their experiences of development, said Han, adding that China will increase its investments in Africa, mainly in agricultural, financial services, logistics and e-commerce sectors.

“We will expand in establishing new economic cooperation zones. We have one already in Ain Sokhna. For Africa’s agricultural development, we will share our experiences with our African friends to increase the food supply by 2030,” mentioned Han.

China will conduct 50 agricultural programmes in Africa with particular focus on increasing the production of wheat, rice, corn, and cotton, said Han, adding that his country will send about 500 Chinese experts to Africa to help in improving agriculture technology.