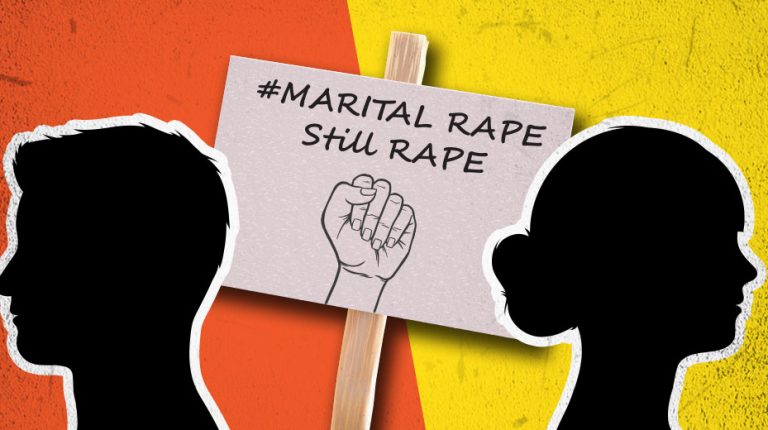 When speaking of violence against women in Egypt, most people would typically think of physical and physiological abuse which women usually are at the receiving end from family members or spouses. However, very few would discern that being raped by husbands or being forced into sexual activity against the woman’s will is also included in violence against women.

With the aim to raise people awareness regarding marital rape, among the programme of the world’s celebration of the international day of combating violence against women and the beginning the 16 days of activism, the Centre for Egyptian Women Legal Assistance (CEWLA), launched, the Not By Force online campaign to counter marital rape.

CEWLA is an NGO seeking to empower women and speak about their rights, especially the ones that are not commonly spoken of in society, and are considered as a women’s duty, such as being forced to have sexual intercourse with her husband against her will.

In cooperation with the UN General Assembly’s International Day for the Elimination of Violence Against Women, the campaign aims to shed light on the different forms of marital rape, by disclosing stories of real women who decided to speak up about their own experiences despite society’s restrictions.

In a statement published by CEWLA, the organisation stated that such acts of violence are usually not spoken of much like the others as the society is not aware of the fact that it is as equal as other types of violence are.

Shedding light on women’s reality in the Egyptian community, we find that there are several forms of violence that women are subjected to within or outside of the family. These numerous forms of violence are encouraged by negative cultural heritage, customs, and traditions, in addition to the deteriorating economic situation. While some of these have started to enter the public sphere of discussion, many still remain taboo. Sadly, violence committed by husbands within the sanctity of the home, is still a taboo subject, shed away from by the public, even when it reaches the level of rape, the statement reads.

Among the published story, was one belonging to a woman who wrote down her story with her husband’s abuse.

“Ever since we got married, sex was considered an extremely hard experience for me. He showed me no mercy,” the lady was quoted saying at one of CEWLA’s Facebook posts.

She continued he story saying that she was forced to sex by her husband to the extent of having nightmares. “If I would wake up in the middle of the night with his hands across my body, I would beg him not to get near me,” she was quoted saying.

“I would work for the whole day and return home back at night to do all the household work, and the minute I lay in bed, he did not care how tired I was, if he is mood for sexual intercourse then we have to do it. Otherwise, a series of other types physical abuse would start,” she added.

The lady described that she was afraid and could not speak to her family of what was happening to her, which led into other sorts of sicknesses that were later diagnosed as to be psychologically driven.

The campaign, started on 25 November, speaks of all sort of violence practiced by husbands, highlighting rape the most.

The 16-day event also includes psychological and social analysis of the results and effects of this form of violence. The campaign further discusses the cultural aspect of the issue, and why we need to raise sexual awareness and education for couples-to-be, as well as arguments on marital sex based on religious texts.

It all added up to the international conventions and protection mechanisms, and the legal view on protecting women.

Throughout their studies on cases of women undergoing violence from spouses, CEWLA found that not so many speak of this as a sort of violence.

The statement added that according to the prevalent patriarchal mindset that many people believe in, marital sex is considered a private issue and a taboo that women are prohibited from speaking about. They are also not supposed to complain about the pain they endure even if their husbands coerce them into sex without their consent, sometimes even during sickness or weakness. Many of the women who talked to the NGO used the expression “I feel he is raping me” to describe the level of suffering and psychological pain resulting from this oppressive relationship; hence, the expression “Marital Rape”.

In 2014, the population survey, under the ministry of health, documented that 267 married women in the study sample of 6,693 women were subjected to sexual violence from their husbands. It also found that 30% who had separated from their husbands had previously been subjected to violence at least once. This is similar to what was reported by the World Health Organization in 2013.

This report was conducted in several countries including Egypt, and documented 35% of women who are subjected to physical or sexual violence from their husbands.

Marital rape: Women between fear of reporting and weak legislation

Women’s rights do not sell