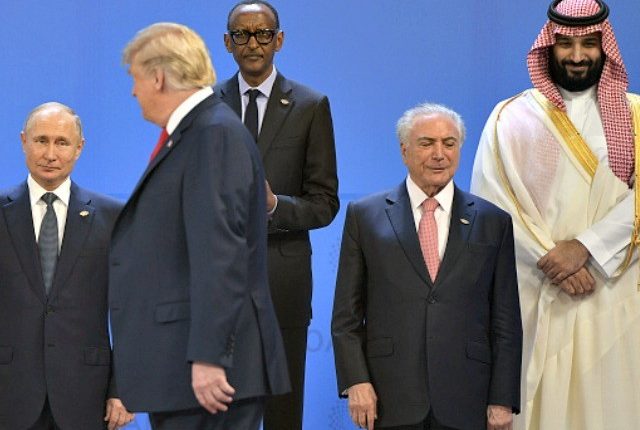 The annual G20 summit kicked off on Friday in the Argentinian capital, Buenos Aires, while all eyes turned to the Saudi Crown Prince, Mohamed bin Salman, over his alleged involvement in the murder of the Washington Post’s columnist, Jamal Khashoggi, inside the kingdom’s consulate in Istanbul.

Despite the fact that ties with the west have recently been strained over the murder, Bin Salman was warmly greeted by Russian President Vladimir Putin. A video of the event showed the two leaders embracing with a smile, and exchanging a ‘high five,’ and a handshake.

The kingdom’s de facto ruler also met with French President Emmanuel Macron during the G20 summit, who expressed his concerns over the journalist’s murder. Macron informed Bin Salman that Europe will insist on involving international experts in the investigations conducted by the Saudi prosecution.

The Élysée Palace reported that the two leaders had a five-minute exchange, noting that Macron conveyed a ‘very firm’ message to Bin Salman over the murder of Khashoggi, and the need to reach a political solution to end the crisis in war-torn Yemen.

Meanwhile, Bin Salman also met British Prime Minister Theresa May during the summit. May stressed “The importance of ensuring that those responsible for the appalling murder of Jamal Khashoggi are to be held to account, and that Saudi Arabia takes action to ensure that such a deplorable incident will not happen again,” her office said in a statement on the meeting.

Furthermore, Trump briefly spoke with the Saudi Crown Prince during the summit, but no meeting was held. Trump told reporters that the two “had no discussion”, noting that they may do so in the future.

Trump was expected to hold a meeting with Putin, but abruptly cancelled it on Thursday over the Russian aggression towards Ukrainian ships. “Based on the fact that the ships and sailors have not been returned to Ukraine from Russia, I have decided it would be best for all parties concerned to cancel my previously scheduled meeting,” Trump tweeted on Thursday.