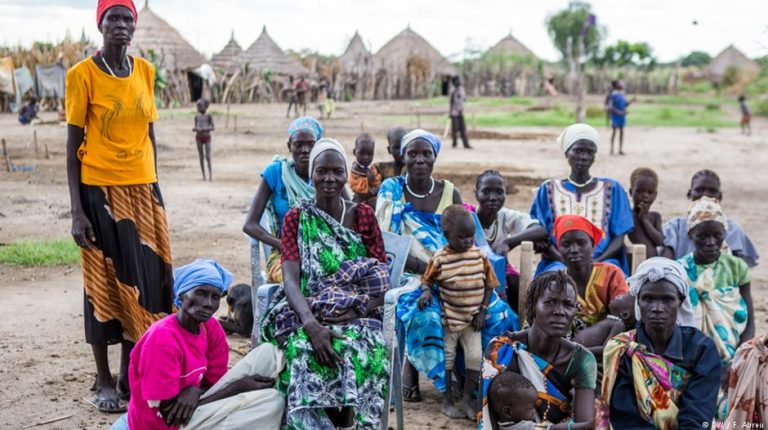 The sexual attacks and beatings in South Sudan over the last 12 days have targeted women walking to collect food to take home to their families. Groups of men numbering up to 20 have been accused of the assaults.Medecins Sans Frontieres (MSF) said on Saturday that it had given emergency medical and psychological help to 157 women and girls who have been raped, beaten and brutalized in South Sudan's Rubkona county since mid-November.

Mitchell Sangma, MSF's medical coordinator in Juba, told DW that the women had typically traveled from neighboring communities, oftentimes a three-hour walk through sparse jungle, to collect food distributed in Bentiu to take back home to their families.

The MSF clinic in Bentiu has treated women up to the age of 65 with bruises and swelling after they were beaten with clubs and sticks. Some of the younger victims were girls as young as 10 who were treated for genital lacerations. Even pregnant women were targeted.

The perpetrators were reportedly large groups of aggressive assailants, often numbering anywhere from five to 20 men, most of whom were armed, masked and dressed in civilian clothing. MSF also had reports of men wearing military uniforms.

The assailants rob and beat the women and girls on their way home. Their food is taken, along with other valuables such their clothes and shoes. Women who travel in groups for safety are overpowered, and even when men accompany them, they have been unable to fend off the armed attackers.

The United Nations mission chief, David Shearer, said the "abhorrent" attacks were carried out by young men in military uniforms and in civilian clothing. The UN said it had increased patrols in the area and launched an investigation while urging local authorities to hold the attackers accountable.

The UN's World Food Program said that it was looking into whether it could move food distribution sites closer to communities in the area. A United Nations panel of experts monitoring sanctions on South Sudan said it remained "extremely concerned" about the continued high level of conflict-related sexual violence, despite the peace deal.

The state minister for information in Northern Liech State where the attacks were reported disputed the magnitude of the reports. "We are a state (that) respects human rights, and women's rights top our list," Lam Tungwar said.

In 2013, just two years after declaring independence, South Sudan was plunged into a bloody civil war that has claimed tens of thousands of lives and displaced millions.

The country remains riven with ethnic grievances and awash with weapons despite a fragile peace accord signed in September by the government and rebel groups.