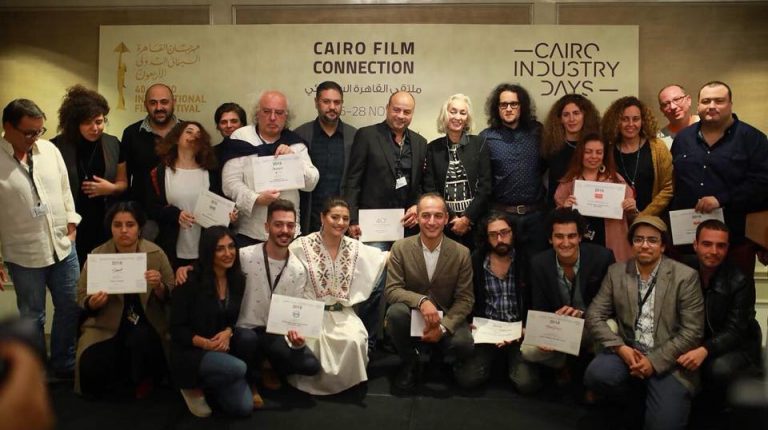 The fifth edition of the Cairo Film Connection (CFC) came to an end in the last days of the Cairo International Film Festival (CIFF) and announced the winning emerging projects. The CFC was held at the festival, in partnership with Arab Cinema Centre (ACC).

The CFC is a space for Arab filmmakers to connect with professionals from the field, and receive the support they need to bring their films to life. In addition, a jury comprised of prominent film professionals, will select projects to receive cash and in-kind awards, presented by the CFC’s valuable partners.

During a three-day period, the CFC invited international producers, film financiers, film distributors, as well as representatives from funding bodies, sales agents, and TV channels, to convene to initiate international co-productions and partnerships with films from the Arab world.

:The awards were announced as the following

The OSN awarded a licensing agreement of $50,000 to Majdi Lakhdar’s film, Before It’s Too Late.

ERGO awarded $15,000 to Crystal Ball, by Tunisian Director Zeinah Al Qahwaji. Front Row and KNCC awarded $10,000 to Once Upon a Time in Tripoli, by Libyan director Abdullah El Ghaly.

ART awarded $10,000 to Inshallah a Boy, by Jordanian director Amjad Al Rasheed. The Arab Cinema Centre granted Egyptian Director, Mohamed Taher, an invitation to attend Rotterdam Lab at the International Film Festival Rotterdam (IFFR) for his film, The Fountain of Bakhchisarai. The film is produced by Mohamed Taher and Amir El-Shenawy. Palm Hills awarded Koutaiba Al Janabi’s film, The Woodman, a $20,000 post-production grant. The company granted a development grant to Egyptian Director, Sherif El Bendary, for his film, Spray. This year, Amir El-Shenawy’s Kilo 64, was screened at the festival during the New Horizons of Arab Cinema competition, and received a grant from the CFC.

In its previous editions, many filmmakers who participated in the CFC , succeeded this year in developing and completing their films, such as Villa 69, Egypt, Tunis by Night, Tunisia, In The Last Days of The City, Egypt, The Return, Syria, and others.

The CFC was launched in 2010 during the 34th edition of the CIFF, where it proved to be a much-needed platform for Arab cinema, and was again held for three rounds between 2012 and 2016.