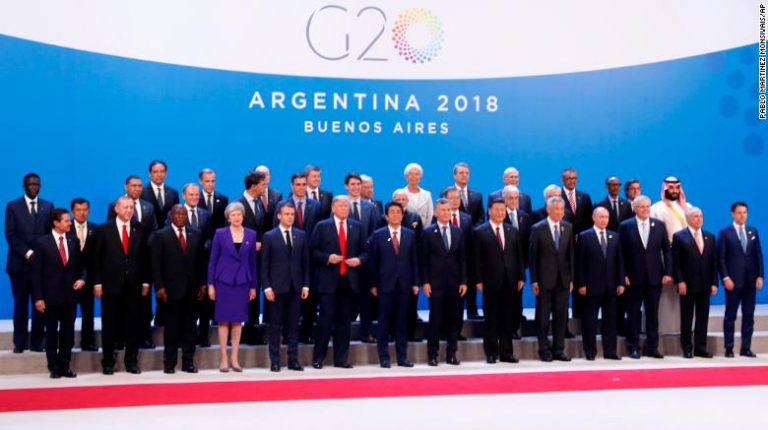 The world’s biggest economies participating in the G20 summit in Argentina held talks on several international issues, including the seized Ukrainian sailors, climate change, and the US-China trade race.

German Chancellor Angela Merkel had an in-depth conversation with the Russian President Vladimir Putin over the deteriorating tensions between Moscow and Kyiv, according to Reuters.

Merkel also sat with French President Emmanuel Macron, who also met with Putin separately during the summit. The German and French leaders demanded the release of the Ukrainian sailors captured by Russia’s navy last week. Putin insisted that their cases would be dealt with by the courts.

Russia has seized several Ukrainian navy vessels on Sunday in the Kerch Strait, which links the Sea of Azov and the Black Sea. The area is located off the Crimean Peninsula, a territory Moscow annexed from the Ukraine in 2014.

During her talks with Putin, Merkel pushed for “freedom of shipping into the Sea of Azov.” The two leaders agreed to initiate talks between Germany, France, Russia, and the Ukraine to reduce regional tensions.

Also, US President Donald Trump and Chinese President Xi Jinping agreed to dial down an escalating trade war at a high-stakes meeting on Saturday, following the summit, in which the world’s leaders called for overhauling global trade rules.

Trump and Xi, accompanied by their aides, met for dinner in the Argentinian capital, Buenos Aires, to discuss trade relations—which were being widely observed by financial markets concerned that escalation of a trade war between the world’s two largest economies could damage global growth.

On climate change, the G20 final communique left the US isolated ahead of a UN climate meeting in Poland, starting on Sunday, to hammer out details of how countries will meet their commitments under the Paris Agreement, to avert catastrophic global warming and mitigate its impacts, AFP reported.