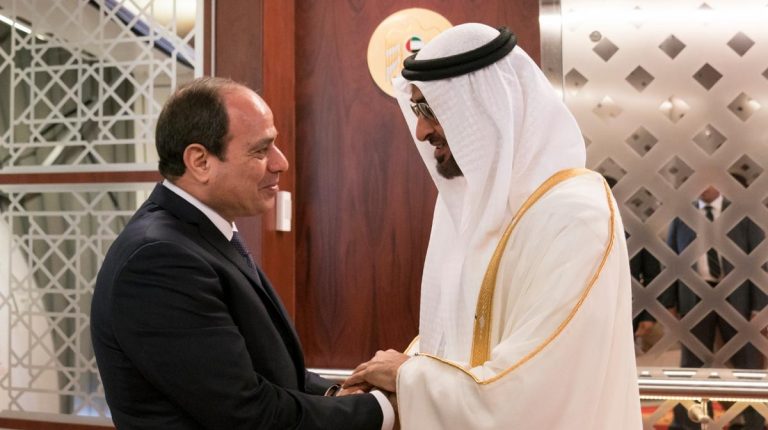 Egypt’s relations with its strategic ally, the United Arab Emirates (UAE), date back to 1971, when a federation was created between seven Emirates, currently the United Arab Emirates. Recent years have witnessed close coordination between the two countries on key regional issues such as the Palestinian, Iraqi, Lebanese, Libyan, Yemeni, and Syrian matters as well as combating terrorism and extremism.

The UAE’s support to Egypt since the June 30 revolution increased the Egyptian state’s capability to confront internal and external challenges. The UAE also backed the Egyptian economy after the decision to float the pound, as the UAE deposited $1bn in the Central Bank of Egypt (CBE) for a period of six years, to sustain the Egyptian exchange market.

On 2 December, the UAE celebrates its National Day which marks the country’s Union Day between the seven emirates of Abu Dhabi, Dubai, Sharjah, Ajman, Fujairah, and Umm al-Quwain in 1971. Sheikh Zayed bin Sultan was the country’s first president. On the occasion of the UAE’s National Day, Daily News Egypt is honoured to issue a special coverage concerning the joint relations to shed light of several aspects of cooperation.

The United Arab Emirates (UAE) is a strategic partner of Egypt and one of the Gulf countries that supported President Abdel Fattah Al-Sisi since he took power in June 2014. On several occasions, Egypt’s President, reiterated his country’s readiness to confront any aggression if the security of the Arab Gulf is exposed to any threat, which confirms both countries’ sturdy relations.

Egypt’s diversified relations with the UAE include business, trade, military, and political aspects. The Central Bank of Egypt’s (CBE) statistics illustrate that Egypt’s trade exchange with the UAE increased by 6.5% during fiscal year (FY) 2017/18 up to $5.822bn from $5.815 in FY 2016/17.

Ambassador Gamal Bayoumi, former assistant minister of foreign affairs and secretary general of the Arab Investors Union, said, “Egypt is the oldest Arab country and the Emirates is one of the newly independent Arab countries, however, both countries enjoy high-levels of bilateral relations.”

Egypt has notably solid relations with the Arab Gulf states, particularly with the UAE and Saudi Arabia, stated Bayoumi, adding, “Sheikh Zayed bin Sultan Al Nahyan established remarkably sturdy relations with Egypt. He was the UAE’s Godfather sand ruler of Abu Dhabi for 38 years. He is the founding father and the principal driving force behind the formation of the UAE.” 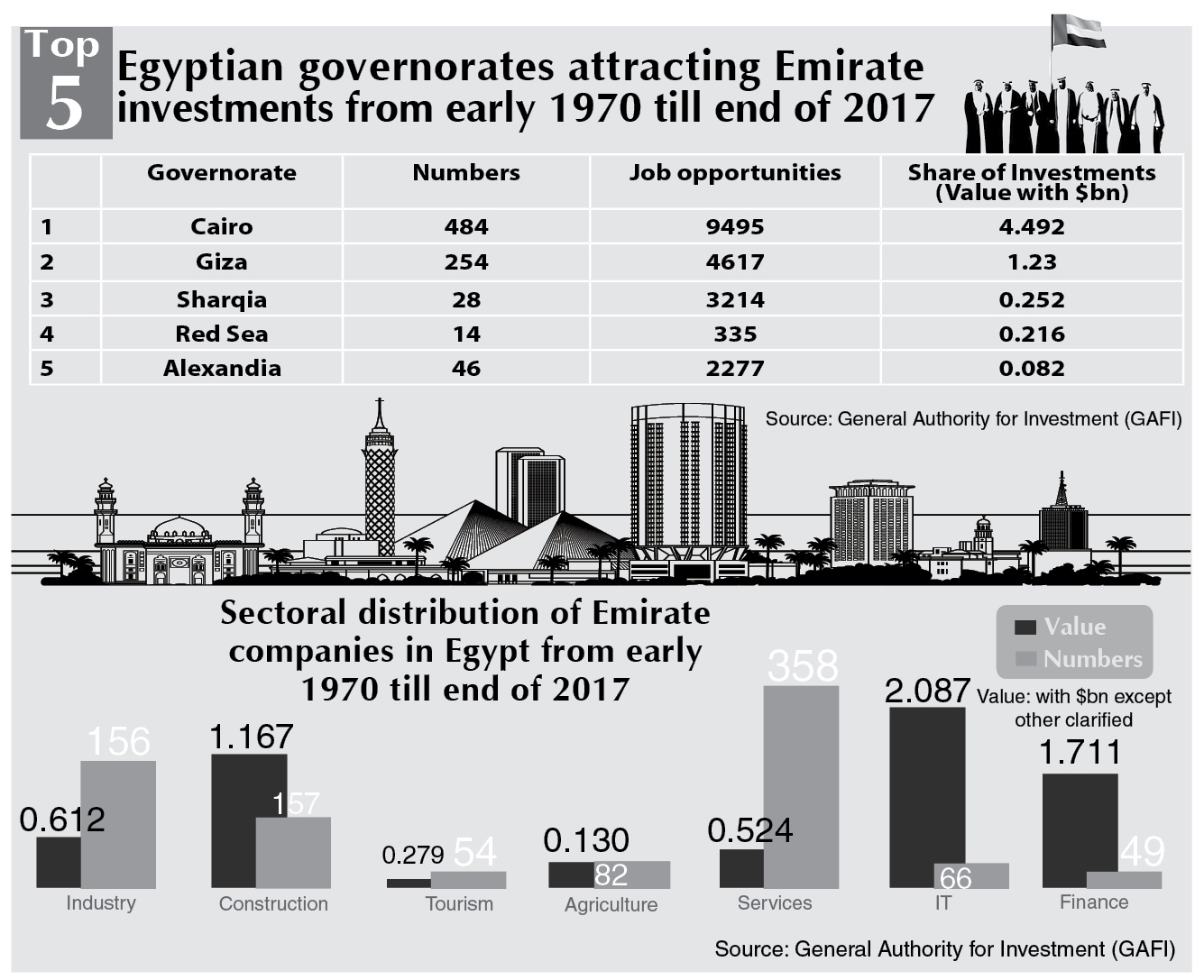 The UAE is one of the biggest investors in Egypt, while the trade exchange is high, according to Bayoumi, who called for increased efforts to boost Egypt’s exports to the UAE, as there exists a significant opportunity for further exports.

Youmn Al-Hamakki, an economic expert, informed Daily News Egypt that Egypt’s economic cooperation with UAE is at the highest level, noting, “the UAE is the first Arab country importing Egypt’s exports. It is one of the main trade and investment partners.”

In October, Egyptian media reported that EgyptAir signed a a partnership agreement contract with the UAE-based KMK Investment and the US-based Safe Ports Holdings to establish a logistics village at Cairo International Airport.

The deal comes as part of the civil aviation ministry’s development strategy, led by Minister Younis El Masry, as per the reports, adding that in line with the deal, Emirati KMK Investment will be responsible for funding, building, and running the village, in addition to supervising EgyptAir projects for transporting goods and exports, in collaboration with the American Safe Ports Holdings.

The UAE hosts quite a respectable number of Egyptian expatriates, which lens an extra advantage to the joint relations, said Al-Hamakki, affirming the importance of Egyptian expats’ remittances towards supporting Egypt’s economic external position.

Remittances are one of Egypt’s main foreign currency sources, which have been on the rise since Egypt floated its local currency in November 2016.

Egypt the UAE are in complete coordination with one another regarding their regional views and foreign policies, Al-Hamakki noted, adding, “both countries have similar views on the issues in Yemen, Syria, Palestine as well as Qatar.”

In June 2017, Saudi Arabia, the UAE, Bahrain, and Egypt severed ties with Qatar, and imposed a complete blockade on Doha, accusing it of “supporting terrorism.” Qatar vehemently denied the allegations.

13 bilateral visits, 8 of them by Sheikh Mohammed bin Zayed to Egypt

“If the Gulf security witnesses any danger or threat from any side, the entire Egyptian population, not only the president, will agree to send forces to repel aggression and support our brothers,” the Egyptian President said in November during the secondWorld Youth Forum, further asserting that, “Egypt will not accept any aggression against Arab national security.”

In August 2018, Sheikh Mohammed bin Zayed landed in Cairo, beginning his official visit to Egypt. He was welcomed at Cairo International Airport by Egyptian President Al-Sisi.

“The UAE and Egypt are united by a long-standing historical relationship which is constantly growing ever stronger,” Sheikh Mohammed bin Zayed said in a statement on Twitter. “We stand together firmly against all attempts to interfere in the internal affairs of the Arab region or to undermine its security and stability.”

In February 2018, Al-Sisi visited the UAE, Abu Dhabi, where he discussed bilateral relations, regional and international issues of mutual concern.

The UAE also supported the Egyptian economy after the decision to float the pound as Dubai Port World, the largest port company in the world, started on February 1 2016 to deal with dollars on land services provided to owners and recipients of goods, instead of dealing with the Egyptian pound.

The UAE deposited a $1bn in the Central Bank of Egypt (CBE) for a period of six years to buttress the Egyptian exchange market.

On 14 March 2017, Egypt’s armed forces and their UAE counterparts continued the activities of the Zayed 2 joint military exercise, which comes by virtue of of the annual joint exercises between the two countries.

The military exercise comes against the backdrop of the distinctive relations binding Cairo and the UAE. Ground forces, marine units, and air forces from the both sides participated in the military drills. The exercises showed that the armed forces in both countries have personal and technical capabilities that would enable them to confront any dangers which could pose a threat to the security and stability in Egypt and the UAE.

March 2014 witnessed the end of the military training between Egypt and the UAE to augment the historical and strategic relations between the two countries.

The joint military training included three phases starting with the arrival of the Egyptian forces in the UAE, followed by specialised training and practical exercises using live ammunition, Mirage 2000 jets, fighter jets, and warships. In addition, artillery units and attack helicopters were deployed as well as marines, special forces, and paratroopers.

The military attachés of the two countries are following-up on the military affairs and cooperation.