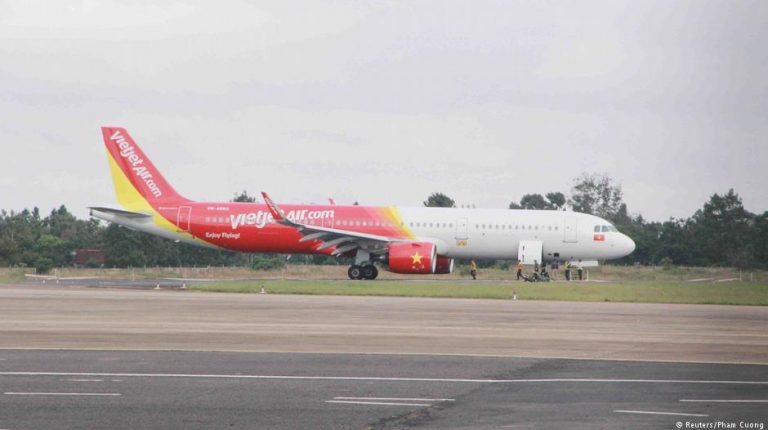 The nose gear tires were shorn off as the VietJet Airbus A321neo landed after a 340-kilometer flight from Ho Chi Minh City. The jet had been delivered just two weeks before the incident.Investigators suspended a flight crew and withdrew pilots' licences on Sunday following the rough landing of a VietJet plane with 207 passengers on board, according to the state-run Vietnam News Agency.

There was a "serious problem" during the landing with the Airbus' "two front wheels," according to the Civil Aviation Authority of Vietnam (CAAV). "The aircraft safely stopped on the runway at Buon Ma Thuot
Airport," CAAV said on its website. Both nose wheels separated from the nose gear strut causing the aircraft to skid to a halt on the runway about 1,200 meters (3,900 feet) down the runway.

The evacuation slides were deployed.

The jet had been delivered just two weeks before the incident.

Southeast Asia's booming aviation industry is facing scrutiny after a Lion Air passenger plane plunged into sea with 189 people on board last month.

That crash was blamed on technical problems with a near-new Boeing 737 that the airline had failed to check.

VietJet is one of Vietnam's top airlines and has performed well in terms of growth and route expansion. At one stage, the airline was adding an aircraft every month to its fleet.

The airline plans to maintain an average fleet age of just three years to keep fuel and maintenance costs low and its planes fresh, its chief executive said last month.