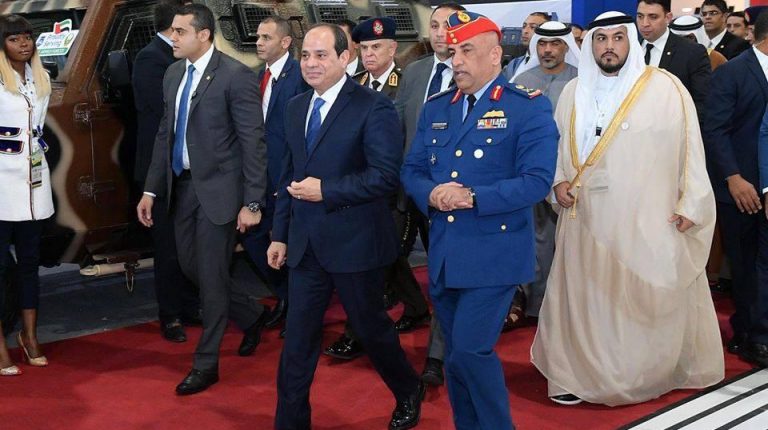 The ceremony included the screening of a film produced by the army’s Department of Morale Affairs dubbed Egypt: Power and Peace. The exhibition shall last from 3 to 5 December.

In a statement, the US mission to Egypt congratulated Cairo on the EDEX and warmly welcomed the over 40 American companies and organisations participating in “this important event.”

The embassy added that many of “the US exhibitors are represented by senior officials from their headquarters,” noting that “American companies offer the most technologically advanced defence solutions in the world.”

The high-level visitors attended the EDEX organised by the UK event’s organiser, Clarion events, which will include over 20 British companies from security and defence fields.

“Egypt is a country of vital strategic importance in the region and Egypt’s future is extremely important to the UK. I am delighted to be back in Egypt, with a delegation of leading British companies focusing on education, as well as over twenty British companies participating in Egypt’s first defence expo to support this country, as it works to realise its development goals,” UK Trade Envoy Sir Jeffrey Donaldson said.

The EDEX, the first of its kind in Egypt, North and Central Africa, hosts more than 300 exhibitors who showcase the latest technology, equipment, and defence systems on land, sea, and air. Additionally, over10,000 industry visitors are expected to attend the event.

The three days of the exhibition will witness heavy equipment offerings, such as tanks and military vehicles, as well as small arms and light weapons.

US marks Fulbright Commission’s 70th anniversary in Egypt in Minya