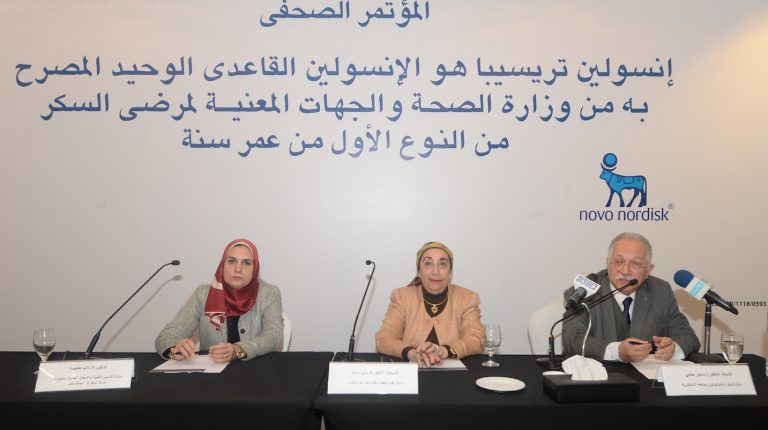 Novo Nordisk, the leading global diabetes healthcare company, announced it obtained the approval of the ministry of health for its product Insulin Degludec (Tresiba) on Monday, to become the only basal insulin for the treatment of Type-1 Diabetes from the age of 1.

The administration of Degludec Tresiba, received regulatory approvals from renowned scientific authorities, such as European Medicines Agency (EMA) and the US Food and Drug Administration (FDA), as well as the Egyptian Ministry of Health.

During a press conference, Clinical, Medical, Regulatory and Quality Director at Novo Nordisk Egypt Dalia Toaima, said that Tresiba is a long-acting insulin, prescribed for patients with Type-1 and Type-2 diabetes as a once a day dose, and it has been available in the local market for a while.

“Tresiba is considered as another scientific breakthrough for the leading global diabetes healthcare company,” stated Toaima.

She added that Novo Nordisk is keen to provide the best healthcare and treatment to people with diabetes in Egypt. “We are willing to go the extra mile to discover new diabetes treatments to alleviate the burden of diabetes complications and contribute to change patients’ lives,” she said, adding, “we allocated 14%-15.8% of our annual sales revenues in research and development activities during the past five years.”

Mona Salem, professor of Paediatrics, Diabetes, and Endocrinology at Ain Shams University, said that Tresiba is a neutral solution, and is the only basal insulin with no burning sensation after injection.

“After first use, Tresiba can be used within eight weeks unlike other basal insulins that should be used within a maximum of 4 to 6 weeks. This leads to the usage of the whole pen without wasting insulin, especially for young patients with Type-1 diabetes who need fewer doses of basal insulin,” said Salem.

According to Salem, clinical trials proved that Tresiba reduces the risk of nocturnal hypoglycaemia by 25%, thanks to its 24-hour long action. She added that Type-1 diabetes patients who use any type of basal insulin, usually reduce the dosage by 20% when switching to Tresiba.

“Additionally, Tresiba reduces the risk of severe hypoglycaemia by 26%, compared to other basal insulins introduced to people with Type-1 diabetes. The benefits of Tresiba also include its ability to control blood sugar levels, because hypoglycaemia is a daily challenge for people with diabetes, as they suffer one episode every eight days on average for patients with Type-1 diabetes, and one episode every three weeks on average for patients with Type-2 diabetes,” Salem said.

Samir Assaad, professor of Internal Medicine and Diabetes at Alexandria University, said during the press conference that Tresiba represents the new generation of insulin, prescribed for Type-1 and Type-2 diabetes patients with a unique ability to control blood glucose levels for 42 hours.

“This allows a once a day dosing, unlike other long-acting insulin that should be taken more than once a day. Owing to its long-lasting effect, it allows the patient to delay or bring forward the dose according to his or her daily life without risking hypoglycaemic events,” Assad declared.