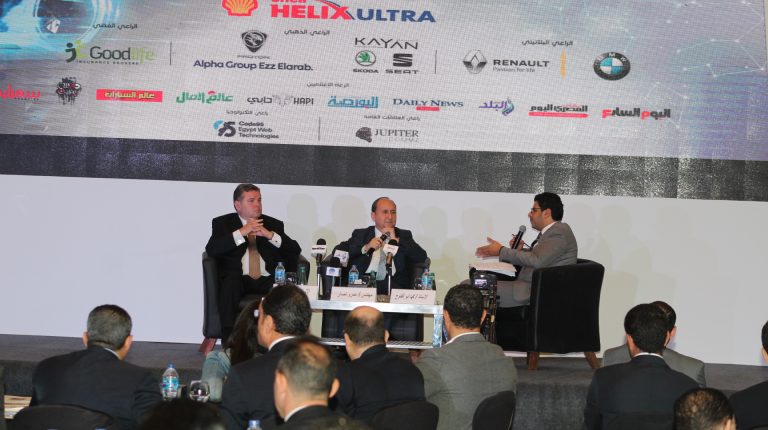 The opening session of the 5th Annual Egypt Automotive Summit witnessed a discussion between Minister of Trade and Industry Amr Nassar, and Minister of Public Business Enterprise Hisham Tawfik, on developments in the automotive industry in Egypt.

The session, chaired by Mohamed Abul Fotouh, CEO of Egypt Automotive, discussed the role of the government in attracting international companies to invest in Egypt in the automotive sector, evaluating the attractiveness of the market for investment, and discussing the development of El Nasr Automotive Manufacturing Company.

Aboul Fotouh began by asking a question about the cooperation between the ministries of public business enterprise and industry reviving El Nasr Automotive Manufacturing Company, which the government hopes to develop through a partnership with a global company to manufacture Egyptian cars, in addition to the joint plans to attract and motivate investors to enter the automotive manufacturing sector.

“We will definitely cooperate with the ministry of industry, which hosts us at its headquarters and can expel us at any time if we do not cooperate,” joked Tawfik, minister of the public business enterprise, adding that Nassar, minister of trade and industry, has vast experience in the automotive sector.

“The promotion of the automotive industry and linking it to El Nasr Automotive Manufacturing Company as a place or product only cannot be imposed on the investor, but our plans are aimed at promoting investment and manufacturing opportunities in Egypt in general,” said Nassar.

“We have a comparative advantage that Egypt is one of the largest markets despite the challenges it faces. With 100 million people, Egypt remains an important export and import platform and absorbs a very large production,” he added.

“We have to add value to the automotive industry and create a productive base that can be exported from, which leads us to study what can be manufactured and exported in Egypt, and we move to the next stage of the manufacturing, whether through El Nasr Automotive Company or in new areas, where there is cooperation between the various ministries as one government.”

Nassar confirmed that 50% of the car companies operating in the market have a desire to cooperate with the ministry to develop El Nasr Automotive Company, and many of these companies participated in the event.

Aboul Fotouh then wondered how El Nasr Automotive Company can be revived, as many businesspersons believe it is not achievable, given the company’s olds production lines and the location, which has become a new obstacle.

“In the past, El Nasr Company had two factories which were divided into El Nasr Automotive Manufacturing Company and Engineering Automotive Transport Company for administrative and financial reasons, not technical ones,” said Tawfik.

“The rehabilitation of the manufacturers or their integration again will be determined by the investment vision of the international company that will develop El Nasr Automotive Company, and whether it will need a large area and has a desire to produce a certain number of cars or not.”

“In 2007, we visited the BMW factory, and inspected a large number of workshops which manufacture gearboxes, car brushes, gauges, etc., which confirms that manufacturing needs a wide range of investments in smaller companies and workshops more than large areas,” minister said.

He pointed out that the past years witnessed major changes in the car industry, after the trend of many car makers manufacturing outside the country of origin, as well as the emergence of alliances between the manufacturers of cars to create large entities.

Tawfik pointed out that the ministry looks forward towards integration with one of the international companies to achieve its objectives in order to create added value for the automotive industry, and turn Egypt into an export base, in conjunction with the growing size of the market and the demand for cars.

“We do not want to be the 13th assembling factory in Egypt. We want to achieve added value through a global company. We will share our capabilities and our funding with foreign investors who can partake in development not only as stakeholders,” he stressed.

Nassar commented by saying, “Egypt is a strong and great country. We have confidence in the presence of a strong automotive industry in Egypt. All the international companies that visited El Nasr’s site have reacted very positively to the possibility of developing it.”

Furthermore, Nassar added that, “We have 10 companies qualified for export in terms of quality and price. The problem lies in the current production capacity, and we have been working for more than three years to solve this problem.”

Feeder industries play a more important role than assembly. “We should see feeding industries as manufacturing export-oriented components,” he pointed out.

In order for the feeding industries to raise their production capacity, they need contracts with international companies for up to 10 years to ensure the feasibility of pumping investments which cannot happen, adding that the ministry is working on alternatives to encourage producers to take the step and reduce the risk, announced the minister.

Tawfik said that his ministry has opened the door to all international companies to bid for the development of El Nasr Company and has been cooperating with the Commercial Representation Authority to attract offers.

“There are no conditions for international companies wishing to apply, with the exception of one—related to quantity. The ministry has set a minimum of 50,000 cars annually, in order to ensure that the investors are serious about setting Egypt as an export base and not only targeting the local market.”

He said that the Automotive Engineering Company has the ability to enter the business processes directly, as the ministry has no objection to reintegrating both companies again depending on the investor’s vision.

Nassar said that the concept of the automotive industry globally is intended for export, not for local markets. “There are a number of international companies that are negotiating with us to discuss the possibility of joint manufacturing to use Egypt as an export platform. These offers are still being studied, while the ministry is working to put together more incentives to localise automotive manufacturing in Egypt,” he added.

He noted that the ministry is looking to increase its exports of engineering industries to the countries of Africa and Central Asia during the next phase.

He underscored that the percentage of our engineering exports to Africa is unsatisfactory and that he seeks to double the volume of our exports to these markets over a period of 2 to 3 years. Similarly, in Central Asia—which was a group of countries that disintegrated from the Soviet Union and led to a manufacturing gap—where the ministry aims to work on signing partnerships with these countries.

Moreover, he continued, “We are working with the commercial representation offices to promote Egyptian products in international markets.”

Aboul Fotouh questioned the plan of the ministry of public business enterprise to deal with the file of defaulting companies in the coming period.

Tawfik said that the ministry of public business enterprise has prepared a new strategy to reform and develop its affiliated companies, and to maximise the revenues of the profitable companies, and turn defaulting companies towards profitable ones in the coming period.

In addition, he added that the first axis of the strategy focused on 26 companies out of 48 defaulting companies, suffering losses of EGP 7.5bn annually. The ministry aims to stop the losses of these companies in the current fiscal year.