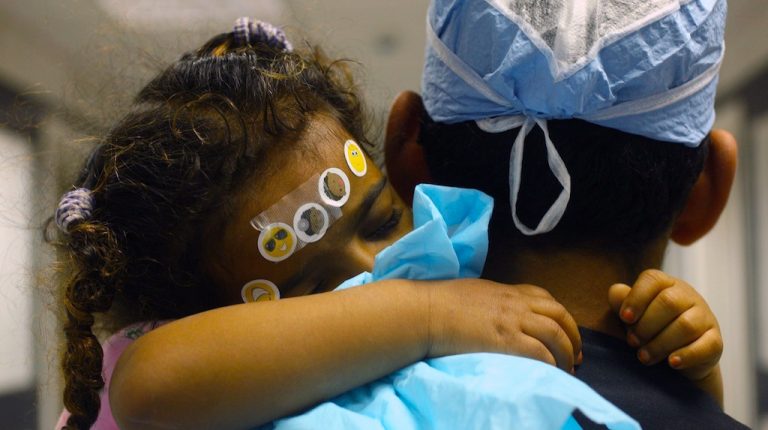 Hope floats. And from the 6 to the 12 of the December hope will float for the very first time for 100 lucky children in Luxorsuffering from cleft lip or palate.

Established in 1982 on an international scale, and operating in Egypt since 2005,Operation Smile is a non-profit surgical mission which will visit Luxor for the very first time coinciding with the launch of a significant Nile Heritage narrative initiative. The Niles New Wavenarrative Heritage, is established by Nile-based photographer Karina Piaro.

Piarohas previously participated in a mission with Operation Smile which took place in Aswan in 2016. As a gesture of unity and celebration, Piaro will be inviting the mission to experience the Nile at Luxor on one of the oldest working Dahabeya on the river.

According to their website, Operation Smile is “an international medical charity that has provided hundreds of thousands of free surgeries for children and young adults in developing countries who are born with cleft lip, cleft palate or other dental, and facial conditions. It is one of the oldest and largest volunteer-based organisations dedicated to improving the health, and lives of children worldwide through access to surgical care. Since 1982, Operation Smile has developed expertise in mobilising volunteer medical teams, to conduct surgical missions in resource-poor environments, while adhering to the highest standards of care and safety. Operation Smile helps to fill the gap in providing access to safe, well-timed surgeries by partnering with hospitals, governments, and ministries of health, training local medical personnel, and donating much-needed supplies and equipment to surgical sites around the world. Founded and based in Virginia, US, Operation Smile has extended its global reach to more than 60 countries through its network of credentialed surgeons, paediatricians, doctors, nurses, and student volunteers.”

Karina Piaro is a British born visual artist with a camera whose heritage emanates personally and creatively from the Nile.

For three decades Piaro has been creating a heritage narrative devotionally and professionally through the lens on the Nile in Egypt. At the turn of the 21st century, she became the first ever female Dahabeya director on the Nile, pioneering thevisually significant Nile Heritage on one of the rarest existing working Dahabeya remaining on the river, dating back to the late 1800s. Previous owners include the celebrated artist Farid Al Atrash, with distinguished guests such as notable members of the Aga Khans family, the current Earl of Carnarvon, and an array of international clientele have sailed the Nile with Piaro.

A paediatrician’s findings are shared and discussed with the medical mission’s clinical coordinator, paediatric intensivists, and anaesthesiologists to determine if it’s safe for the patient to be put under anaesthesia – the aspect of surgery that presents the most risk in any environment, including the world’s most advanced hospitals.

“By investing in bringing in the full cadre of specialties, local health systems take notice and will aspire toward exceptional patient care. We believe that anything less than excellence is unacceptable,” said Bill Magee, co-founder and CEO of Operation Smile, adding, “In the settings we go into, we know that patients may not have access to the full complement of these specialties, so we’ve always set the stage for excellence – never modelling mediocrity,” stressed Operation Smile’s CEO.

“Why go to these lengths? The answer is simple: our patients deserve it, “says Operation Smile’s website.

What is Cleft Lip?

The lip forms between the fourth and seventh weeks of pregnancy. As a baby develops during pregnancy, body tissue and special cells from each side of the head grow toward the centre of the face and join together to make the face. This joining of tissue forms the facial features, like the lips and mouth. A cleft lip happens if the tissue that makes up the lip does not join completely before birth. This results in an opening in the upper lip. The opening in the lip can be a small slit or it can be a large opening that goes through the lip into the nose. A cleft lip can be on one or both sides of the lip or in the middle of the lip, which occurs very rarely. Children with a cleft lip also can have a cleft palate.

What is Cleft Palate?

Researchers believe that most cases of cleft lip and cleft palate are caused by an interaction of genetic and environmental factors. In many babies, a definite cause isn’t discovered.

The mother or the father can pass on genes that cause clefting, either alone or as part of a genetic syndrome that includes a cleft lip or cleft palate as one of its signs. In some cases, babies inherit a gene that makes them more likely to develop a cleft, and then an environmental trigger actually causes the cleft to occur.

Several factors may increase the likelihood of a baby developing a cleft lip and cleft palate, including:

According to their website, Operation Smile was “founded in 1982 when Dr. William P. Magee, Jr., a plastic surgeon, and his wife, Kathleen, a nurse and clinical social worker, traveled to the Philippines with a group of medical volunteers to repair children’s cleft lips and cleft palates.

What they found was overwhelming. “People pushed their babies at us,” recalls Kathy. “They tugged at our sleeves with tears in their eyes and begged us to help their children.” In Naga City, approximately 300 families arrived hoping their children would receive surgery, but the team could only treat 40 children. As they prepared to leave, the Magees made a promise they would return to help more children.

They began soliciting donations of surgical equipment and supplies from manufacturers, threw themselves into grassroots fundraising, and assembled a volunteer team of 18 doctors, nurses and technicians for their own medical mission to the Philippines. They helped approximately 100 more patients, but again, hundreds still waited.

They saw the need and Operation Smile was born.

How you can help: give a life-changing surgery

According to Operation Smile: “Every 3 minutes, a child is born with a cleft lip or cleft palate. It takes as little as $240 and as few as 45 minutes to provide life-changing surgery and a bright, beautiful new smile to a waiting child.”

Operation Smile’s “medical programmes are almost entirely volunteer-based, so we rely on medical professionals who can take charge of their roles with confidence, conviction and world-class skill. These traits have made Operation Smile a global leader in performing safe cleft surgery in resource-limited environments for more than three decades. Guided by our Global Standardsof Care, medical volunteers must be able to work as a team to balance the highest possible quality of care, with the efficiency to serve as many patients as our time and resources will allow. This demands stamina – physically, mentally and emotionally – as long hours and a fast pace are expected of our volunteers. Our work also requires travel to locations across the globe, which presents its own set of demands and challenges.”

Operation Smile aligns with leading global corporations that share their vision of a world where no child suffers from lack of access to safe surgery. Each of their corporate partnerships is customised to form a mutually successful and engaged relationship, based on a shared passion for helping children in need. When Operation Smile partners with businesses, they offer a global presence, brand recognition, and marketing and public relations support. Some of their partners includeJohnson & Johnson Family of Companies,Colgate Oral Pharmaceuticals, Exxon Mobil Corp, PayPal Giving Fund, and PepsiCo Inc.

Final composition of Ismail’s government within a week

Operation Smile: changing lives, one smile at a time

Youth on the Nile

An audience with Hans Küng

No security risk in grooving to Gaga, US Army says