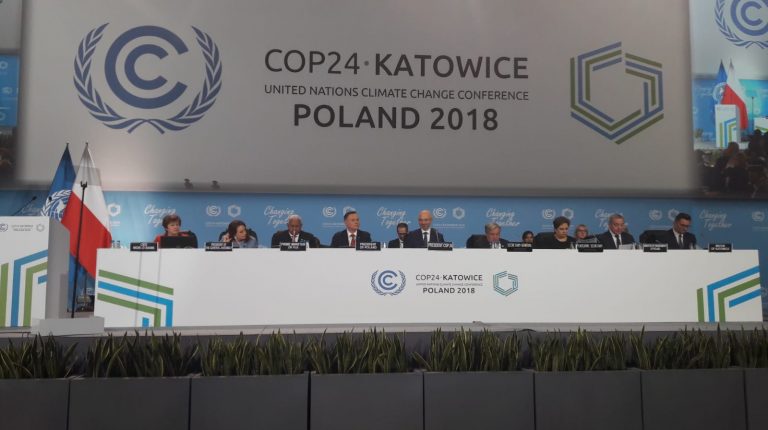 The 24th Conference of the Parties to the United Nations Framework Convention on Climate Change (COP24), launched on Monday in Katowice, Poland, with the goal of finalising the implementation guidelines for the Paris climate change agreement. The COP24 came after a year of devastating climate disasters around the globe.

During the past year, several reports and studies warned of climatic catastrophes, if the world did not take action to stop them. According to the World Meteorological Organisation’s latest report, the 20 warmest years on record have been during the past 22 years, with the past four years as the warmest.

In its latest report, the Intergovernmental Panel on Climate Change (IPCC) urged the international community to take rapid steps to counter climate change and its expected impacts. Climate change represents an urgent, and a potentially irreversible threat, to human societies and the planet.

Over two weeks, the conference is expected to finalise the rules for implementing the Paris Agreement on climate change, under the Paris Agreement work programme (PAWP). Discussions will include a number of high-level-, mandated-, and action events, as well as roundtable meetings.

Egypt’s Minister of Environment, Yasmine Fouad, headed the Egyptian delegation to the COP24. She said that the Polish president’s affirmation of the importance of ‘combining’ the three Rio agreements, reflects and supports the Egyptian efforts which are in the same direction, through President’s Abdel Fattah Al-Sisi’s initiative, launched during the Conference of the Parties on the Convention of Biological Diversity (COP14) in Egypt last month.

The minister praised the international commitment on reaching a work programme to benefit all the parties of the agreement. She also lauded the World Bank’s (WB) announcement of doubling the funds for countering climate change. Furthermore, Fouad met with the UN chief during the COP24.

The WB group announced during the opening session of the COP24, that it will double its current five-year investments to around $200bn, to encourage countries to take ambitious climate actions.

During the opening session of the COP24, the United Nations Secretary-General, António Guterres, said that the world is in deep trouble regarding climate change, adding that climate change is developing faster than we are, and we must catch up sooner rather than later before it is too late, as the issue is a matter of life and death for many people and countries.

“Even as we witness devastating climate impacts causing havoc across the world, we are still not doing enough, nor moving fast enough, to prevent irreversible and catastrophic climate disruption,” Guterres said. He pointed out that the Paris Agreement provides the framework for action, therefore “We must operationalise it.”

The UN chief further said, “The majority of countries most responsible for greenhouse gas emissions are behind in their efforts to meet their Paris pledges.” According to Guterres, “If we fail, the Arctic and Antarctic will continue to melt, corals will bleach and then die, the oceans will rise, more people will die from air pollution, water scarcity will plague a significant proportion of humanity, and the cost of disasters will skyrocket.”

During her speech before the opening session, Patricia Espinosa, the UN’s climate chief, said “This year is likely to be one of the four hottest years on record. Greenhouse gas’ concentrations in the atmosphere are at record levels, and emissions continue to rise. Climate change impacts have never been worse. This reality is telling us that we need to do much more—COP24 needs to make that happen”.

She added that “All of these findings-regarding climate devastation-confirm the need to maintain the strongest commitment to the Paris Agreement’s aims of limiting global warming to below 2ºC, and pursuing efforts towards 1.5ºC.”

Espinosa stressed that our focus should be on reaching the aim of meeting Paris Agreement’s requirements.