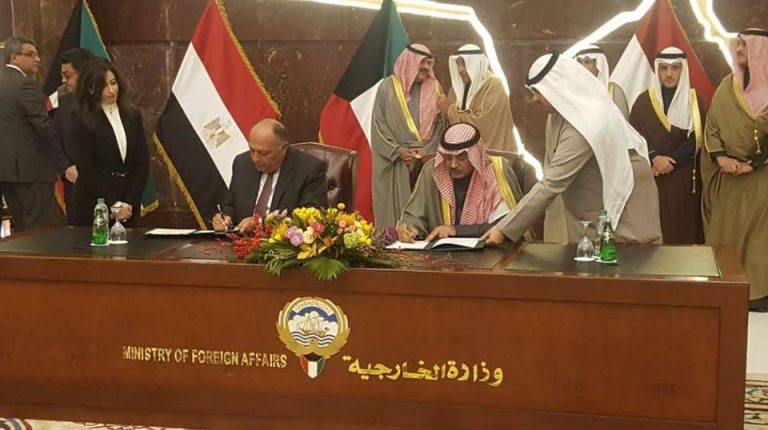 The Arab Quartet – Egypt, Saudi Arabia, the UAE, Bahrain – is ready to restore relations with Qatar if it changes its foreign policies, the Egyptian Minister of Foreign Affairs, Sameh Shoukry, said in an interview with the Kuwaiti News Agency, Kuna, on Tuesday.

The statement came during Shoukry’s visit to Kuwait as head of Egypt’s delegation to the 12th round of the joint committee meetings which started on Tuesday.

Shoukry asserted Egypt’s adherence to the thirteen conditions previously demanded by the Arab Quartet in order to end the dispute with Qatar, stating that there can be a chance for talks with Qatar only in the event that it displays genuine intention to change its policies, and stop interfering in other countries’ internal affairs, hosting extremist organisations, and promoting them in its media outlets.

Meanwhile, Shourky said that Egypt is ready to normalise relations with Turkey if it abides by principles of international relations, but currently, Egypt will keep reserved diplomatic relations between the two countries.”

The Egyptian minister said “the illegal presence of Turkish forces on the territories of two Arab countries [Syria and Iraq] is a disturbing issue, which affects Turkish relations with Egypt and Arabs in general.”

Furthermore, he maintained that international relations must be built on cooperation and common interests, without interference in internal affairs of other states or attempting to dominate or impose control over other states.

Shoukry noted that “there is a difference in visions on ways to deal with a number of issues, including combating terrorism,” adding that “Turkey has a negative influence on the Syrian and Libyan crises, which is complicating the situation.”

During the Kuna interview, Shoukry spoke of Kuwait’s role in supporting Egypt, saying there is a close bilateral coordination with Kuwait in the UN and the Arab region in general.

Regarding Iran’s threats to the region, Shoukry said that the regional shipping lanes are secured by the international community, stressing that Egypt will not accept any violation that can affect the interests of neighbouring countries, especially when it comes to the security of the Gulf.

As for the current Yemeni talks in Sweden, Shoukry said that Egypt supports the UN-sponsored move, and wishes to see these talks would receiving more flexibility and understanding from the different sides for the benefit of the Yemeni people.

The 12th Egyptian-Kuwaiti Joint Committee witnessed the signing of two agreements and six memorandums of understanding between the both countries in various fields, including the labour force, education, culture, and security cooperation, according to Shoukry.

After returning from Kuwait, Shoukry is expected to meet with his Jordanian counterpart, Ayman Safadi on Wednesday, to discuss developing bilateral relations and the latest regional developments, especially the Palestinian cause.