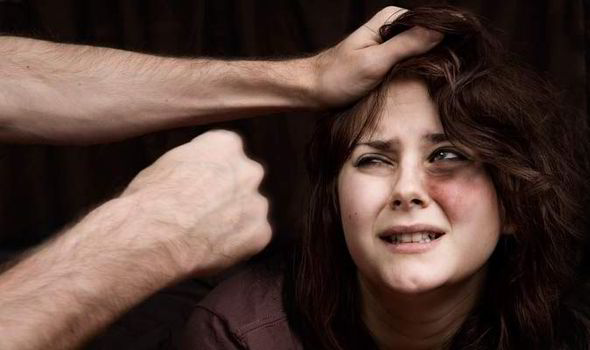 During the 16 days of activism against gender-based abuse, starting from 25 November on the International Day for the Elimination of Violence Against Women on Friday and ends on Human Rights Day on 10 December, the director of planning department at the National Council For women (NCW) assured that the NCW is combating all forms of violence against women, referring to the national strategy to combat violence.

On the other hand, she mentioned that there are still many challenges facing the end of violence against women.

She pointed also to the existence of eight care places in Egypt which host violence victims, and also confirmed the launch of 15 units to combat violence against women in Egyptian universities.

One of the main challenges which impede women from facing violence and rather ignoring violence instead is that sometimes women do not know where to go, so DNE visited one of these shelter centres located in the Sixth of October, and listened to a violence victim who sat down in a hosting centre, and recounted how her presence in the centre changed her life completely.

Conditions for being hosted in the centre

For her part, Aya Ibrahim, the centre’s director, said that the hosting centres are mainly aimed to protect women who are subjected to violence from their husbands or families, explaining that the centres receive an annual subsidy from the ministry of solidarity to provide the best accommodation for all women seeking protection.

Concerning the conditions for being hosted in the centre, she explained that the women or girl must be have been subjected to violence, and that she must be Egyptian, or a foreigner married to an Egyptian.

From tears to joy

As for Mona Ahmed, 35, she said that she is from Fayoum, and has been married for 14 years. She narrated that when her husband proposed to her, he denied that he only has a junior certificate, but just after two weeks of marriage she discovered the truth. She continued that he used assault and hit her over and over.

She mentioned that she thought of suicide more than once, then after being married for 14 years, she decided on divorce but he refused.

“I managed to raise a Khulu’ case against him, and when he found out he hit me until I was injured with a cut in my spinal column,” she said with tears in eyes.

“After winning the Khulu’ case, my family refused to host me in the house as they thought I was wrong and that I should have worked harder to maintain my house and my husband, unfortunately they did not understand the case right,” she continued crying.

“Then I found my way to the centre. At first I was very disappointed, but by time I learned dressmaking and sewing. Then I bought a sewing machine, and now I have my own atelier, “she said proudly.

Ahmed’s story is not a singular story, there exists many other positive stories like Ahmed’s who decided to confront the violence and stop it.