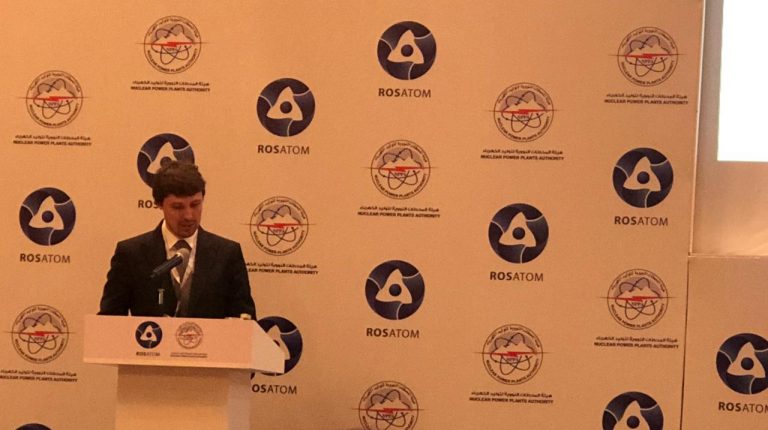 The events of the Forum of Nuclear Industries Suppliers Forum was organised by Russian Rosatom State Atomiс Energy Corporation, in cooperation with the Nuclear Power Plants Authority (NPPA) where special sessions were held for discussing the available opportunities for the suppliers of the different kinds of equipment, services, and general construction work. Additionally, individual work meetings for commercial work services were held by Egyptian companies, and representatives from Russian nuclear industry companies to participate in implementing the El Dabaa nuclear energy plant project.

The forum’s first day witnessed offers made to representatives of Rosatom and its companies, such as the coalition of the Rosenergoatom and Atomenergomash department for equipment production as well as others in order to implement a nuclear energy plant project using Russian technology in Finland. This is in addition to the Rosatom Service company which specialises in maintaining and updating plants, as well as qualifying cadres.

The forum included representatives from about 200 companies, including Hassan Allam, Arab Contractors, Orascom, and Petrojet, as well as a large number of Egyptian company chairpersons working in the field of supplies for electrical missions.

Participants in the forum were introduced to Rosatom’s purchase system, as well as the main rules and requirements of the purchase documents. They received information about the current requirements within the framework of the purchase measures in some supply and services’ fields.

Representatives from the engineering department presented information on the current situation of the Dabaa plant, as well as plans and timetables for the purchases of the project.

The First Deputy Director General for Corporate Development and International Business at Rosatom, Kirill Komarov, said that Dabaa is not just a new page in the history of Russian-Egyptian relations, rather, it is important that the plant provides Egypt with stable, attractive, and eco-friendly energy, and it holds a strong social, and economic incentive for developing the country, and improving citizens’ living standards.

He added that the nuclear energy plant in Dabaa is the largest infrastructure facility contributing towards developing the industry and generating jobs, as well as bringing together several Egyptian companies.

Furthermore, Komarov expected the participation rate of Egyptian companies in the first nuclear reactor in Dabaa to reach 20% and gradually increase to 30%.

A panel discussion was held on the second day on the general acceptance of nuclear energy. Some of those who participated in the discussion were Abdel Hamid El Desouky , the deputy chairperson of the NPPA, and Alexander Voronkov, the director of Rosatom Middle East and Africa.

Voronkov said that general acceptance is one of the main factors to develop nuclear technologies in any country. Rosatom gives great attention to cooperation with the public, and its partners, in countries where there are nuclear establishments.

“In Egypt, we are still in the early stages of implementing the Dabaa project. It is necessary to have a direct dialogue with the community, mass media, and experts, in order to disseminate only the accurate and most complete information on nuclear technologies,” he added.

Amgad el-Wakeel, the NPPA chairperson, said that the project to establish the first nuclear energy plant for electricity generation in Dabaa with a capacity of 4800MW, in cooperation with Russia, is considered the largest project in Egypt’s modern history.

El-Wakeel added that the forum aims to introduce Egyptian companies to the most important requirements for the Dabaa project, with the aim of maximising the chance of Egyptian companies’ participation in the activities of implementing the project, in order to achieve the strategy of technology localisation in Egypt, and to improve the quality of Egyptian industries.

Moreover, el-Wakeel pointed out that an agreement was reached with the Russian side to set the rate of local participation in the first and second nuclear reactors 20-25%, gradually increasing it to 30% for the third and fourth units.