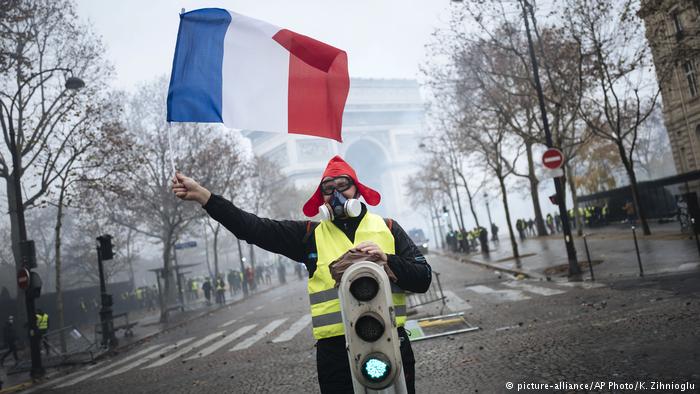 French police have arrested hundreds of civilians on Saturday in anticipation of angry protests against the economic policies of French President Emmanuel Macron.

Prime Minister Edouard Philippe said around 481 people have been arrested in Paris “under suspicion of intent to commit violence, destruction, or vandalism,” AFP reported.

Similarly, the police in Paris fired tear gas canisters at ‘Yellow Vest’ demonstrators on Saturday, AP reported, adding that some 8,000 police personnel were deployed in the capital ahead of the protests, with 89,000 forces prepared for action across the country.

In anticipation of the protests, the Eiffel Tower and Louvre Museum were closed, along with hundreds of shops and businesses amid fears of possible looting. Also, different diplomatic missions, including the Egyptian consulate, have warned their citizens not go near the protests and to carry identification papers in anticipation of violence.

These protests were called for by the ‘Yellow Vests’ movement. Although members of the movement have called for a lull after their representatives met the French Prime Minister, protests continued on Saturday.

However, the French government and security have expressed fear that “the protests over higher living costs could be hijacked by extremists from both the left and right political spectrums,” AFP reported.

“According to the information we have, some radicalised and rebellious individuals will try mobilise tomorrow,” Interior Minister Christophe Castaner told reporters in a press conference on Friday, adding, “some ultra-violent people want to take part.”

After the first wave of protests last week, President Macron announced that the planned increased in petrol and diesel taxes would be suspended.