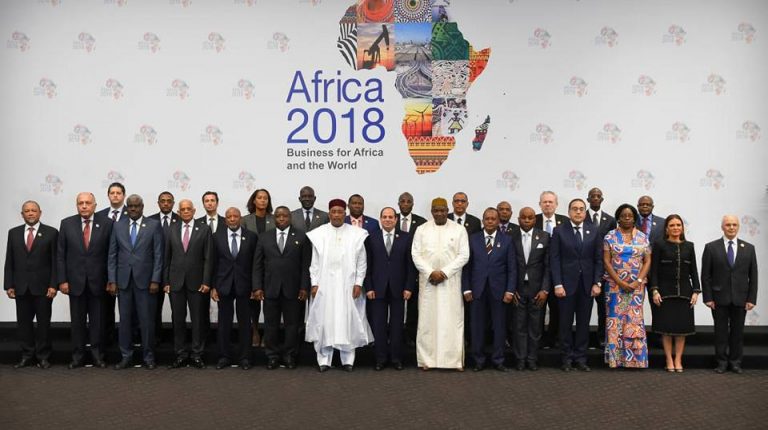 President Abdel Fattah Al-Sisi said on Sunday that Egypt has come a long way in its path of economic and social reform, as well as created a more attractive environment for local and foreign investment. He added that those steps contributed towards enhancing the economic indicators and Egypt’s credit rating, according to testimonials from several international institutions.

During his speech at the inauguration of the third African invest forum Africa 2018 in Sharm El-Sheikh, Al-Sisi expressed aspiration for regional integration, the facilitation of commerce movement, and expanding investments with Africa. Egypt’s investments in Africa have increased by $1.2bn in 2018, reaching $10.2bn, he added.

Ten African presidents and a number of prime ministers and ministers, as well as 2,000 investors, enterprisers, are participating in the Africa 2018 Forum in Sharm El-Sheikh city to address the issue of development in the continent.

The president said further that the Egyptian efforts come simultaneously with efforts in a number of African countries to implement reform programmes. He pointed out Africa’s need for reforms which are compatible with today’s requirements, meeting civilians’ needs and achieving development.

Al-Sisi said that these reforms should include developing roads, airports, ports, electricity, water, and sanitary networks. Additionally, the president stressed the necessity to meet the requirements of the technological revolution and new industries related to the digital economy, as well as considering the need to counter climate change and decreasing harmful emissions to conserve the planet.

The world is looking towards Africa as the land of opportunities which is qualified to achieve high sustainable economic growth rates, said Al-Sisi. Furthermore, he stressed the necessity to invest in African youth and to support them through funding their projects in order to provide job opportunities.

Also during the forum, the president said in the entrepreneurship session, that the challenges facing global economy requires us to continue increased cooperation between governments and the private sector in order to support entrepreneurship in Africa, and mobilise efforts to enable African youth to improve their capabilities.

Africa is the future of the international economy and entrepreneurship, said Al-Sisi.

Additionally, during the forum, the Minister of Foreign Affairs, Sameh Shoukry, met with the African Union Commission (AUC) Chairperson Moussa Faki on Saturday, and discussed restructuring the AUC as well as ncooperation between Egypt and the AUC amid Egypt’s presidency for the AUC in 2019.

During the meeting, Shoukry reviewed Egypt’s efforts and arrangements for chairing the AUC next year. He stressed President Al-Sisi’s support for economic cooperation with Africa and supporting the continent’s infrastructure, as well as achieving sustainable development.

According to a statement from the foreign ministry spokesperson Ahmed Hafez, Faki praised Egypt’s pivotal role in Africa, expressing aspiration for increasing cooperation between Egypt and the AUC.

Moreover, Shoukry met with the new Secretary General of the Common Market for Eastern and Southern Africa (COMESA) Chileshe Kapwepwe. Shoukry praised the cooperation between Egypt and the COMESA for organising the third African investment forum. He stressed the importance of cooperating with African countries for attracting more investments and increasing development rates in Africa.

Shoukry also asserted the necessity of working towards developing peace, security and stability in Africa, which will be positively reflect on achieving economic integration and attracting investments into Africa. For her part, Kapwepwe praised Egyptian efforts in security and peace issues.

She further added that despite Africa’s success in increasing the number of women in parliament, the continent needs increased support for women’s economic role and empowerment.