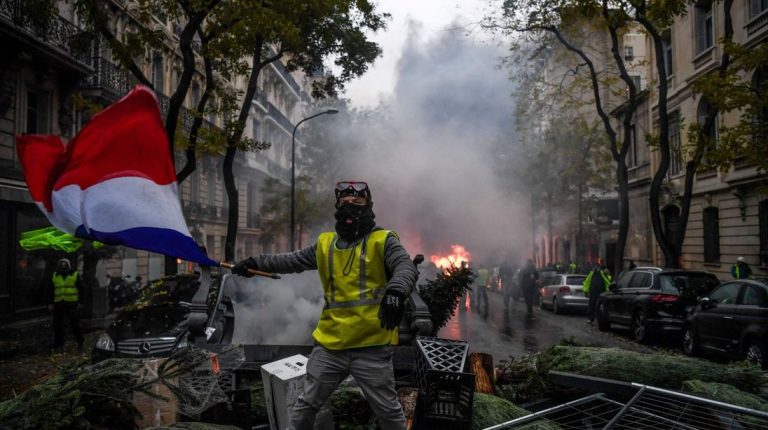 In the privately-owned Al-Masry Al-Youm, Abdul Moneim Saeed lamented the violence and damages resulting from the “French Spring” as he described it. In a comparison he drew between the Yellow Vest protests in Paris against fuel taxes and mass demonstrations against former president Hosni Mubarak in Egypt back in 2011, Saeed argued that both movements, like other “springs” throughout history elsewhere, had no leadership, goals, or political vision. He added that he expects France to overcome these turbulent weeks but as a result, young protesters, or “saboteurs” to become isolated and drawn to terrorist groups while the right wing, seeking law and order, takes over.

As for Emad El-Din Hussein, editor-in-chief of the private Al-Shorouk newspaper, he focused on why French President Emmanuel Macron backed off despite initially stating there would be no compromises? Was his submission to protesters’ demands a mistake? Hussein argued that unlike previous French rail strikes which infolded over summer, a majority of the people supported recent demands, raising the bar even higher. Hussein’s concern seemed to be the spread of such demonstrations to more countries, especially as social media gave the events an international dimension.

Karim Abdul Salam from Al-Youm Al-Sabea private newspaper opinionated that the protests are not spontaneous reactions to the government’s decisions, suggesting as proof that violence has not ended when the government backed off. Thus, Abdul Salam suggested that those movements are supported by outside states and entities, as happened in Egypt before, he argued.

From a similar approach, Atef Zidan highlighted in his piece for state-owned daily Al-Akhbar how US President Donald Trump seemed to rejoice about the violent incidents, which in his opinion shows how US interests and conspiracy do not care about the destruction of states and bloodshed among peoples, just as with the Arab Spring. To him, the EU is threatened by destruction and division as US intelligence bodies continue to conspire. He added that France is now having a taste of such American medicine, which Egypt was able to overcome during the “so-called Arab Spring.”

Finally, Saeed Al-Lawendy opinionated in the private Al-Watan newspaper that the violence shows that protesters took advantage of the backup of both the extreme right wing and left, in addition to US meddling as a punishment for Macron who suggested Europe should have its own army.